How New York City Got Its Nickname ‘The Big Apple’ 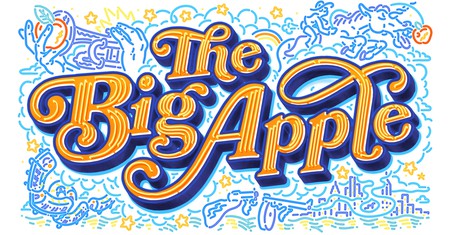 Even though New York State is the second-largest supplier of apples in the United States, New York City’s nickname ‘The Big Apple’ has nothing to do with fruit. In fact, the moniker traces its roots to horse racing.

New York City has a number of nicknames, including ‘The City That Never Sleeps,’ ‘The City So Nice They Named It Twice,’ ‘The City of Dreams,’ ‘Empire City’ and ‘Gotham,’ but the best known of the bunch is ‘The Big Apple.’

Author Gerald Leonard Cohen wrote in Origin of New York City’s Nickname ‘The Big Apple’ (1991) that in the 19th and early 20th centuries “a big red apple was apparently something of special desirability.” For example, students in the US, Denmark and Sweden would give teachers a fresh, polished apple as a form of flattery; the symbol is still associated with educators today.

In the early 1900s, “apple” was also used as a slang term for a city, particularly by those in more rural areas. While he was in New Orleans, New York horse-racing journalist John J. Fitz Gerald overheard stable hands referring to the New York City circuit as the big apple. In a 1924 column for the Morning Telegraph titled ‘Around the Big Apple’, Fitz Gerald penned: “The Big Apple, the dream of every lad that ever threw a leg over a thoroughbred and the goal of all horsemen. There’s only one Big Apple. That’s New York.”

The expression’s usage expanded into the music industry in the 1930s, when it was picked up by jazz musicians citing a desire to play big-time venues and gigs in New York City rather than smaller venues around the country.

The Big Apple moniker faded from use over the following decades but was revitalized in the 1970s by Charles Gillett, president of the New York Convention and Visitors Bureau. Paying homage to its popularity among the Jazz Age musicians he was fond of, Gillett began a much-needed tourism campaign centered around ‘The Big Apple’ to counter the city’s fiscal issues, increased crime rate and poor reputation. He created Big Apple stickers, pins and T-shirts that were worn and distributed by celebrities including NBC News anchor Tom Snyder, comedian Alan King and New York Knicks star Dave DeBusschere. Visitors to NYC were encouraged to “take a bite out of the Big Apple.”

According to Gillett’s 1995 obituary in The New York Times: “A jazz fan, he remembered that musicians in the 1920s and ’30s had an expression for playing the big time after gigs in one-horse towns: ‘There are many apples on the tree, but when you pick New York City, you pick the Big Apple.’”

Interestingly, before NYC was ever ‘The Big Apple,’ it was a little Orange. After being founded by the Dutch in 1625 as New Amsterdam and then conquered by the English in 1664 (and redubbed New York City), the city was temporarily reclaimed by the Dutch in 1673 and called New Orange in honor of the Netherlands’ Prince William of Orange. New Orange lasted just one year before the English regained control and returned the name to New York City.

Today, people all over the world still want a bite of ‘The Big Apple.’ According to NYC & Company, the city’s official destination-marketing organization, 62.8 million visitors came to the five boroughs in 2017, a mark that continued an eight-year trend of record-breaking tourism.

“The Big Apple has always been an aspirational destination defined by its great and diverse people and its unparalleled culture,” says Chris Heywood, senior vice president of global communications at NYC & Company. “That has not changed.”

This article is an updated version of a story created by Julia Goicochea.