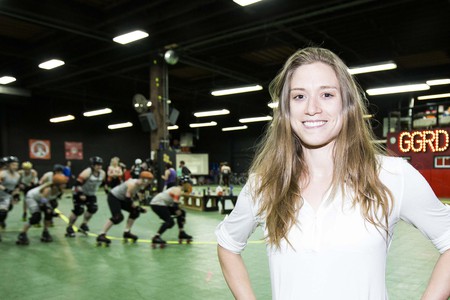 Susannah Hainley grew up with a varied athletic background—ballet, lacrosse, rugby, swimming. She never found her thing. She knew, though, that she preferred team sports to solo ones.

Roller derby proved to be just right for Hainley. “Roller derby is the perfect mix of grace and aggression,” she said.

While playing rugby at DePaul University, Hainley learned about roller derby. She had it in the back of her mind when she moved to Los Angeles—“it’s a big spectacle and really fun environment”—but didn’t think about playing because she didn’t have health insurance. When she moved to New York, the idea of lacing up her skates lingered in her mind. She finally signed up for a class and began her love affair with the sport.

“In that first class I met some of my best friends I have in New York still today,” she said.

Not having skated since attending roller skating birthday parties in middle school, Hainley called upon her prior sports experience, in particular the gracefulness of ballet, to acclimatize herself with her new sport. She certainly wasn’t afraid of falling, getting hit or getting hurt; she had already gone through the experience of dislocating her shoulder while playing rugby. 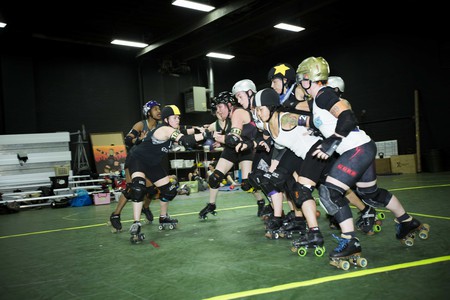 “I’ve been there, I’ve done that,” she said. “It was more being really bad at something for a long time—skating and doing a contact sport at the same time is very difficult; it requires a lot of coordination and practice.”

Not only is Hainley literally balancing the skating and contact involved in roller derby, she’s also balancing life as senior art director at T Brand Studio, the brand marketing unit of The New York Times, and her other “job” in the rink.

“New York is very demanding of your time,” she said. “But it’s true of anything—if you really want to do something you do it, and I’ve been able to carve out space for roller derby in my life.”

Culture Trip: What does it mean to play in such an accomplished league?

Susannah Hainley: This league is one of the best leagues in the world, and they take roller derby very seriously. The great thing is they make it accessible to everyone, but it requires commitment. You have to put time in to do it, just like any sport; roller derby in particular, especially this league—they’re playing at such a high level. A lot of people dropped out by the second or third class in basic training because they expected it to be this kind of fun, social, “I’m going to roller skate, be good at it and drink beers after”, and that’s not at all what it is.

CT: How do people react when you say you play roller derby?

SH: I was at the women’s march in New York City and I was wearing my Gotham jacket. There were two older couples separately who approached me and were like, “Hey, the roller derby,” and either they had been to an event or said they used to watch it when they were a kid. There’s a small subset of people who don’t know what it is. I think most people don’t know how it’s played so they’re very curious to hear about it in more detail. They know it’s on skates and you go in a circle. I’ve gotten asked before if there was a ball. It’s interesting to hear people’s outlandish perceptions about roller derby.

SH: It was really hard, actually. It took forever and I don’t think mine is particularly the best because it’s just a play on my name. I polled my co-workers, my friends. I actually started a Google doc and sent it around to my co-workers. You also have to be aware of the nickname because it’s usually just a one syllable name; mine’s Bruise. So you could have a really good name, but your nickname could be shit then you’re screwed because that’s what your name will be to every other person you play with.

When I was trying to think of a name, one of my co-workers said I should be “Large Marg” because it’s funny since I’m not that big and a small person. I mentioned it in passing to my friends and they still call me Marg to this day and it’s starting to filter in. It’s that kind of thing—once it’s stuck in someone’s brain, it’s never going to leave.