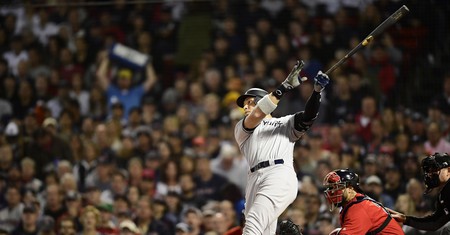 Aaron Judge took Major League Baseball (MLB) by storm as a rookie in 2017. The slugging New York Yankees outfielder dazzled and wowed watchers with his power at the plate and surprising agility in the outfield. Judge put on a clinic to become the first rookie to win the MLB Home Run Derby, and he finished the year with the most home runs ever by an MLB rookie. Get to know Aaron James Judge with these 10 facts.

Judge surpassed the great Joe DiMaggio for most home runs by a Yankees rookie with his 30th home run of the 2017 season on July 7 of that year. DiMaggio hit 29 home runs in 138 games in 1936, while Judge needed just 84 games to break the record. “It’s quite an honor,” Judge said at the time. He finished the season with 52 dingers, the most ever by an MLB rookie. 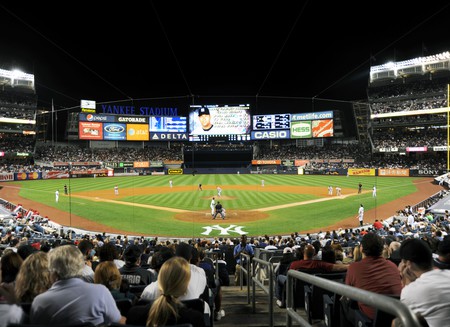 Born April 26, 1992, in Linden, California, Judge was adopted the next day by teachers Wayne and Patty Judge. It wasn’t until he was 10 or 11 years old that Judge was told he was adopted. “I feel they kind of picked me,” Judge said. “I feel that God was the one that matched us together.” He says he calls his parents every day.

While Judge has gained notoriety as a professional baseball player, he was a three-sport star at Linden High School in California, playing baseball, basketball and football. In football, Judge set school records for single-season touchdowns and receiving yards as a senior and holds Linden’s record for career receiving TDs. 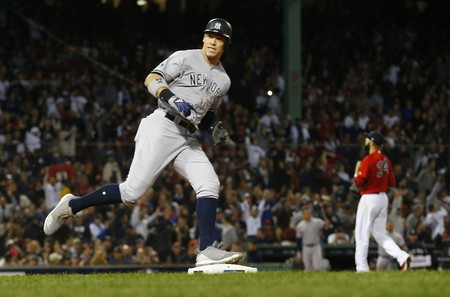 Judge rounds the bases after hitting a home run against the Boston Red Sox in a playoff game on October 6, 2018 | © CJ GUNTHER/EPA-EFE/REX/Shutterstock

Just before every game’s first pitch, Judge pops two pieces of Dubble Bubble sugar-free gum into his mouth and will continue to chew those same two pieces until he makes an out. It was a tradition he started in college. If he goes 3-for-3, for example, he’ll have been chewing the same gum the entire game, which usually lasts about three hours. “Hopefully, by the end of the night I have a nasty, old, unflavored piece of gum in my mouth,” he said. “… No, I keep it in there. It is lucky.” 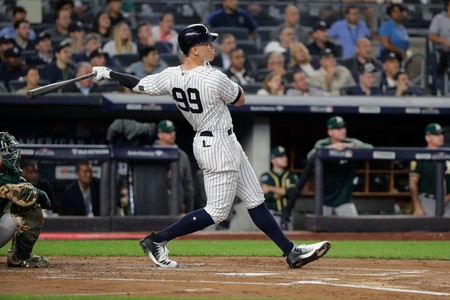 Judge hits a two-run home run during the first inning of a playoff game against the Oakland Athletics on October 3, 2018 | © Frank Franklin II/AP/REX/Shutterstock

Judge was recruited by Stanford, Notre Dame and UCLA to play tight end but opted instead to continue his baseball career in college at Fresno State University, where both his parents studied. He was even selected in the 31st round of the 2010 MLB draft by the Oakland Athletics out of high school but chose to play for the Bulldogs for three years instead. The Yankees selected him in the first round (32nd overall) in the 2013 MLB draft.

Yankee Stadium is known for the Bleacher Creatures – a group of diehard fans who occupy the right-field bleachers in Section 203. The stadium is now also known for The Judge’s Chambers, an 18-seat section spanning three rows in right field that looks like a faux courtroom. Fans, who are chosen at random to sit there, are equipped with wigs, foam gavels and judicial robes. All rise!

The newest addition to Yankee Stadium?

Hit a home run in his first MLB at-bat 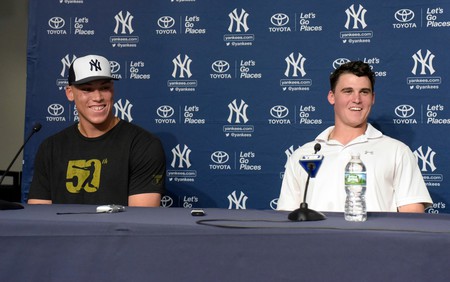 Judge, left, and Tyler Austin speak to the media after becoming the first teammates to hit home runs in the first at-bats of their major league debuts in the same game | © Bill Kostroun/AP/REX/Shutterstock

At 6 feet 7 inches (2 meters) and 282 pounds (128 kilograms), Judge is one of seven MLB hitters since 2000 to stand at least that tall. His shoe size is 17. Surprisingly, the towering Judge had an 88 percent success rate stealing bases in college. 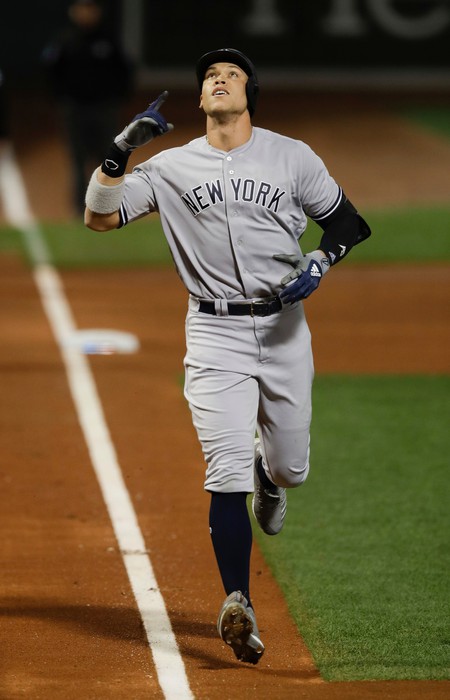 Judge celebrates after a home run against the Boston Red Sox on October 6, 2018 | © Charles Krupa/AP/REX/Shutterstock

Along with Giancarlo Stanton, Judge was a pre-contest favorite, but after Stanton was eliminated in the first round and Judge rallied for 23 home runs to eliminate Miami’s Justin Bour, Judge became the man to beat. The rookie rose to the occasion, defeating the Dodgers’ Cody Bellinger in the second round before cruising past the Twins’ Miguel Sanó to win the 2017 MLB Home Run Derby.

We've told you all year … ALL RISE. pic.twitter.com/ZqYHFSi0JE 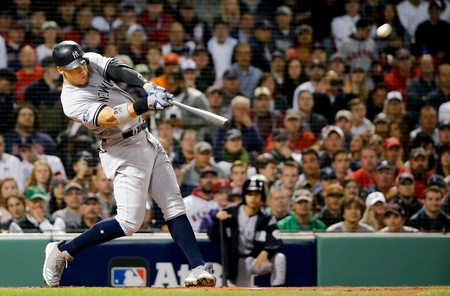 Judge knocks it out of the park against the Boston Red Sox on October 6, 2018 | © Elise Amendola/AP/REX/Shutterstock
Give us feedback