From Bagel with a Schmear to Michelin-Starred: Anthony Bourdain’s Favorite NYC Restaurants 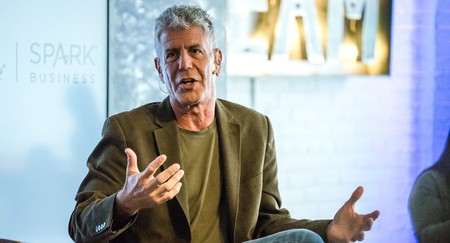 In the days after Anthony Bourdain’s death, fans piled bouquets and pinned letters outside long-shuttered Les Halles, the Park Avenue brasserie where he cooked in the early days of his celebrity chefdom. He used his Manhattan pad as home base for his raucous food adventures around the world and all over the city’s five boroughs. A consummate New Yorker, he said on one episode of A Cook’s Tour that “I love it here even when I hate it.”

Even if Bourdain was usually out of town, he had an ever-growing list of beloved places in New York City. Some restaurants were all-around favorites of his, and others he frequented to cure particular cravings. But every one of those spots represented an aspect of New York City, specifically Anthony Bourdain’s New York City: as one of a kind, straight to the point, and unforgettable as Bourdain himself.

We’ve been hearing some stories…and we’re excited it’s finally time to see. Watch these two take on the French Alps this Sunday on the newest episode of Parts Unknown.

Bourdain spent his TV career tracking down off-the-beaten-path restaurants and turning them into must-visit destinations. But just because a place was already famous wasn’t necessarily a strike against it. Eric Ripert, chef of Manhattan’s Michelin-starred French seafood temple Le Bernardin, was one of Bourdain’s closest friends and frequent travel companions. His restaurant was the site of many epic Bourdain-Ripert meals.

Bourdain shared the excitement that Le Bernardin diners felt about Ripert’s exquisite seafood inventions, such as the “barely cooked” scallop with bonito butter sauce or the lacquered lobster tail with tagliatelle and black truffle sauce. “Nobody goes to Le Bernardin with, you know, ‘I feel like a nice piece of flounder,’” Bourdain told Thrillist.

Bourdain was also pleased to see younger diners revere Ripert’s food and spend their paychecks on a Le Bernardin dinner. He told The Daily Beast: “This is money that, 20 years ago, people of that demographic would be spending on cocaine or concert tickets. That’s a big shift.”

Bourdain’s visit to Xi’an’s first branch in Flushing, Queens, back in 2008 turned into a life-changing experience for the family of Chinese immigrants who run the growing 12-restaurant empire. Xi’an is dedicated to the food of the namesake city in China’s northern Shaanxi province, and Bourdain told The Wall Street Journal that the restaurant has “the kind of dining room I like, the kind of smells I like, the no-pretense, available-to-everyone, democratic dining experience I believe in.”

Dishes like hand-pulled noodles and lamb burgers with cumin and pickled jalapeños made even Bourdain, a lifelong Chinese food eater, admit that “I’ve never had anything like this before.” Bourdain’s rave about Xi’an on No Reservations helped the restaurant grow beyond the owner’s dreams, and now the founder’s son, current CEO Jason Wang, is honoring Bourdain’s memory by donating more than $73,000, the profits of a full day of business on the day of Bourdain’s death, to the National Suicide Prevention Lifeline.

A West Village hideaway, Takashi’s dedication to organ meats tends to either thrill or terrify its guests, and Bourdain was firmly on the thrilled side. “To have a place in New York that serves so much guts is encouraging,” Bourdain noted, “and, in this case, delicious.”

What would he order? “I’m going to get bialys and a pile of chopped liver,” and echoing his Barney Greengrass order, he’ll also go for “smoked salmon and some cream cheese, maybe some sturgeon, and maybe some fish eggs—and I’m just going to go berserk.”

Chicken wing and clam dish last night at #prunerestaurant Delicious. And the sauce was perfect.

Chef Gabrielle Hamilton opened this tiny, iconoclastic East Village restaurant in 1999, and Bourdain became one of its earliest fans.

Hamilton has always done it her way, whether serving up canned sardines with Triscuits or dishing out elegant yet gutsy dishes like chicken wings with Manila clams braised in sherry at dinnertime.

For the last episode of his Travel Channel show No Reservations, Bourdain went to Brooklyn—which he had largely overlooked in spite of living so close.

“What’s happening culinarily in Brooklyn is impacting Paris,” he told the New York Post. “The fact that I don’t know what they’re talking about was a liability that had to be fixed.”

Although Bourdain hit a few buzzy spots like Roberta’s and Brooklyn Fare, much of the episode was focused on classic Brooklyn joints that have been around since the early 1930s, such as Randazzo’s Clam Bar in Sheepshead Bay. It serves up giant platters of Italian-American dishes like shrimp parmigiana with pasta, spaghetti with calamari sauce, and loads of clams done every which way.

As Bourdain told the New York Post in an interview after the shoot, “They have meatballs the size of your head, pasta that’s been pre-cooked and rinsed. This is not how they do it in Italy.” Italian-American all the way, Randazzo’s is “one of those places that if you have any sentiment for the way things used to be, you can’t help but love it.”

The Bronx doesn’t get as much attention for its food as other New York City boroughs, and Bourdain tried to fix that in one episode of Parts Unknown. He enlisted Bronx natives like hip-hop icon DJ Kool Herc to show him around the borough and lead him to its must-visit food destinations. One of the most memorable spots he stopped at is Sea Shore Restaurant on City Island, an atmospheric, old-fashioned fishing enclave that many longtime New Yorkers don’t even know about.

Bourdain was in his element at City Island’s seafood-centric Sea Shore Restaurant, which has a massive menu of nearly every kind of fish done every which way. Bourdain called it “a massive fish factory on the water of a type I’m very familiar with, having started my cooking career in one just like it. I’m also a sentimental fool, and I love this kind of thing.” What did he eat? A lot, especially the “steamers, a true taste of childhood.”

#TBT to the time HW and I went to Staten Island #littlesrilanka and had this deliciously vegan plate of rice and curry consisting of dhal, moju (tempered brinjal), onion salad, polos (jackfruit) curry, curried breadfruit and sautéed chickpeas and beans. Thank you, @newashasrilankanrestaurant for the amazing food and the Sri Lankan hospitality…You made me feel like I was back at home 😊 #whatveganseat #vegan #vegansrilankan #crueltyfree #plantbased #plantbasedprotein #plantpowered #srilankanfoodblogger #statenisland #newasha #newashasrilankan #newashasrilankanrestaurant #vegansofig #vegancommunity #veganfoodshare #vegan

For a deep dive into Staten Island’s food culture, Bourdain brought along David Johansen of the 1970s punk-rock band The New York Dolls, who grew up on Staten Island. Since an eating trip around the borough would have been sorely lacking without at least one stop at a Sri Lankan restaurant (Staten Island has the city’s largest Sri Lankan community and one of the biggest stateside), Johansen brought Bourdain to New Asha. The meal took Bourdain straight back to his eating adventures around Sri Lanka.

“There’s great Sri Lankan food in Staten Island, and that’s not something you see a lot of in New York,” said Bourdain. “I’m a fan of Sri Lankan black curries from my time in that country, so it’s nice to know they’re there.” And as vocal as Bourdain had always been about Manhattan’s unparalleled food culture, even he admitted that to find Sri Lankan curries this good in his home borough, “You have to look long and hard for them.”

Rest In Peace, Anthony Bourdain. I didn’t realize we shared the same love for this dish #barneygreengrass #novaeggsandonions #bagel

“Whenever I want to treat myself to breakfast in New York, in fact, the best breakfast in the universe, I go to a little place in my neighborhood… the legendary Barney Greengrass, the Sturgeon King,” Bourdain said in an episode of A Cook’s Tour. The classic Jewish deli has been open on the Upper West Side since 1908, and Bourdain often went there to enjoy “the essential ingredients for a balanced breakfast: New York Times, Barney Greengrass, cigarettes.”

Oh yeah, and the food. His favorites were the namesake sturgeon platter and the Nova eggs—smoked salmon scrambled with caramelized onions and eggs—and coffee, of course. “I like my coffee regular. Regular in New York is with milk and sugar. Not even ‘regular,’” he clarified. “It’s regulah.” The day after Bourdain’s death, the staff set his table with his favorite breakfast.