For Arcade Bakery, Success Comes Without a Traditional Storefront 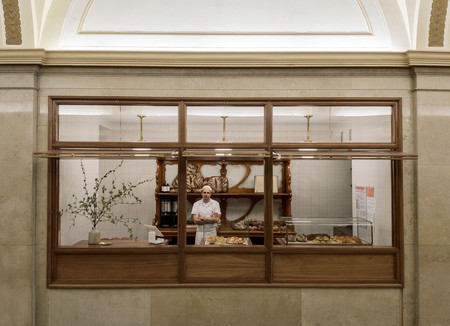 Roger Gural, founder and baker, stands among his many breads and pastries at Arcade Bakery | © Matthew Williams

New Yorkers walking down Church Street have no idea they are passing one of the best bakeries in the city.

At Arcade Bakery, things operate a little differently. The French bakery is housed deep inside the lobby of an office building in TriBeCa, hidden far away from honking traffic.

But why station a bakery in an office building, seemingly miles away from sidewalk access?

“I wanted to do a retail bakery, and the rent associated with street frontage would have prohibited that,” Roger Gural, owner of Arcade Bakery explains, alluding to New York’s ever-rising rent prices. 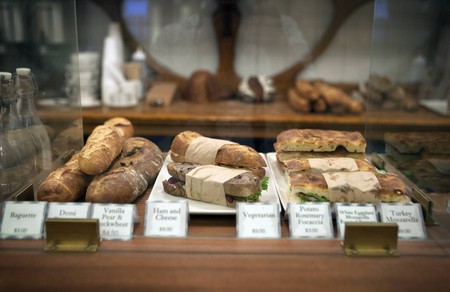 A selection of breads and sandwiches | © Matthew Salacuse

The name is innocuously stamped on the outside of the grandiose office building in simple silver letters. But there’s no other sign—no obvious line snaking around the corner—to indicate that a wizard-like bread and pastry operation resides inside, regularly casting spells on dough. Unlike the many bakeries scattered around the city, whose ornamented windows showcase a host of sweets (“Cupcakes! Cookies! Croissants!”), Arcade Bakery has simply relied on word of mouth to lure people in.

“It took a few months for word to get out,” Gural admits, agreeing that opening Arcade without a storefront certainly wasn’t easy. But if the bread is good, Gural says, then people will come.

And come they did. The press and social media have helped over the years, of course. Plus there’s the foot traffic from employees of 220 Church Street (who, on a daily basis, are treated far better breakfasts and lunches than their neighbors in other parts of the city forced to snack on chips from the vending machine). But for the most part, Arcade has successfully navigated running a bakery without usual marketing necessities. 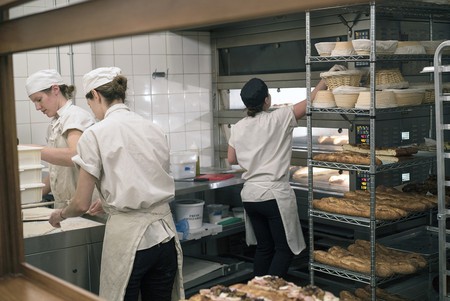 Bakers toy with dough in the kitchen | © Jesse Hsu

That’s a big deal in a city like New York, where you’d be hard-pressed to find a street that doesn’t cater to the city’s inherent—and extremely visible—love of carbohydrates; we’re talking bagel shops, slice joints, pretzel carts, you name it. This innate, magnetic pull towards gluten is so ingrained in New York culture that you’d have to be blindfolded to miss it. Early-morning commuters spill out of the subway, habitually finding themselves at silver coffee carts sipping $1 cups of coffee alongside a soft-buttered roll or everything bagel before heading to the office. New Yorkers rely on this easy access to their favorite starchy staple.

Yet Arcade Bakery balks at tradition. And Gural is happy to do so, opting for his covert space rather than one boasting the built-in visibility so many bakeries depend on. This rather rebellious ideology is a breath of fresh air in a city overrun with sweet shops aiming to create the next Cronut.

“The food business is difficult and the economics are unforgiving, so there is a lot of pressure to try and generate attention,” Gural says. “Unfortunately, the qualities that garner attention don’t usually make for good food.” 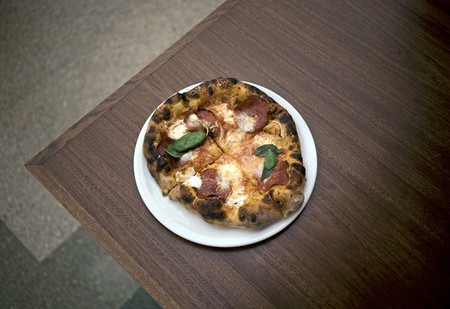 Gural’s focus is culinary excellence: a roster of baked goods that feel straight out of French boulangeries and patisseries. Which makes sense, considering he studied bread baking at the French Culinary Institute and learned from mentors at Bouley. Walk into Arcade on a weekday and you’ll find vanilla pear and buckwheat baguettes, juxtaposed with thick slices of chocolate-walnut babka. There’s made-to-order pizzas, flaky croissants, and cheese danishes crowned with delicate fruit. And you’ll frequently see bakers fiddling with dough in the open kitchen, scoring breads and laminating butter-infused dough.

For Arcade, its charm lies not in New York’s deep-rooted chaos, but in a quiet seclusion. It neither searches for the next big thing, nor imitates one’s past. The bakery isn’t trying to be what it’s not; it’s simply, unabashedly itself.