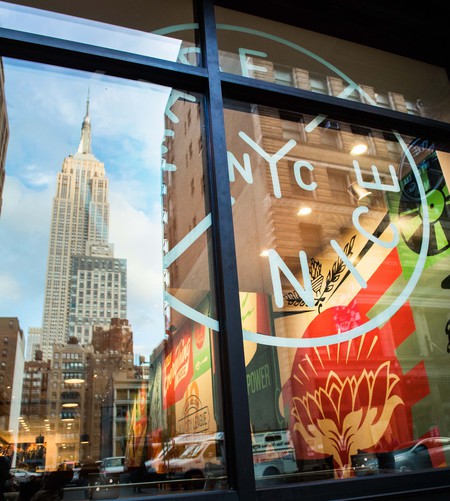 No longer do you have to spend a lot of money—and time—to enjoy food from some of NYC’s best chefs. Several of them have opened fast-casual spots in the past year, bringing inexpensive versions of their fine-dining fare to the hungry masses.

NYC loves its fast-casual spots. Too busy for long sit-down lunches, but imagining ourselves too sophisticated and independent to patronize the usual fast-food chains, we New Yorkers want our food to arrive quickly, fresh, and delicious. We also love an Instagrammable name brand and the veneer of luxury brought by a vicarious rubbing of shoulders with a chef whose name our friends recognize.

Enter the fancy-chef fast-casual spot. Several of them this year, in fact. Chefs from some of NYC’s most notable restaurants have recently opened inexpensive casual dining concepts—one even leaving his spot at one of the city’s top fine-dining places to do so.

Here are the most notable new fast-casual spots of 2017.

From Will Guidara and Daniel Humm, the team behind Eleven Madison Park and The NoMad, comes Made Nice (named for EMP’s slogan and decree “Make It Nice”). Each dish here (most are served in a vaguely salad-like form, for $15 or less) supposedly has its roots in one from the team’s more formal spots; it can be fun to play a matching game, spotting which dish was inspired by which pricier version. The true must-order is the soft-serve ice cream topped with honey brittle and oat shortbread and then drizzled with honey. It’s a close cousin of a dessert served at The NoMad, which itself riffed off EMP’s famed “milk and honey.”
8 West 28th Street, New York City

All the makings of a well -balanced meal #makeitnice

Chef Nick Anderer of Marta has again teamed with restaurateur Danny Meyer to open Martina, a casual, counter-service-only little sister to their larger pizza-centric spot. The pies at Martina are similar to those at Marta, with thin and crispy crusts and delicious toppings (try the one with ham, egg, fontina, and mushrooms), but a bit smaller and decidedly cheaper, at $7-12 apiece. As at Marta, a range of high-end wines and Champagnes are on offer, at prices much lower than those usually seen at restaurants.
198 East 11th St., New York City

Mark Ladner became known as one of America’s best pasta chefs in his former role as the executive chef of Del Posto, and now he’s speedily serving up bowls of pasta to the masses at Pasta Flyer. Here, you can mix and match five pasta shapes and four sauces for $7-8 per bowl, while the “Nonna Loves You” combo meal gets you spaghetti and meatballs with marinara sauce, a side salad, and a fountain drink for 10 bucks. The pastas we’ve tried were cooked perfectly al dente, but you won’t mistake the sauces for those served at Ladner’s former fine-dining restaurant. Then again, you’re also not paying Del Posto prices for them. Fun fact: Ladner’s not the first chef from Del Posto to go the fast-casual route. Brooks Headley, the former pastry chef, paved the way with Superiority Burger a few years back, instantly making veggie burgers the hot new thing in town.
510 Sixth Ave., New York City

Bring home some pasta for your kiddos on this rainy night! The Nonna Loves You Meal Deal is just $9.99 for spaghetti & meatballs, salad & a drink.

Celeb chef Tom Colicchio’s ‘Wichcraft chain was among the first entries in the fast-casual market in 2003, providing hungry office workers around the city with upscale sandwiches and soups. The chef reaffirmed his commitment to the chain by opening a new flagship location in the Garment District this past summer. It ushered in an expanded menu, and has later hours than the other locations, so you can savor a beer or wine with your turkey-avocado sandwich.
1407 Broadway, New York City

The chef whose empire is anchored by Aureole (and includes more than a dozen other venues across the country, most emblazoned by his full name) is now offering steak sandwiches to concert- and sporting event-goers at Madison Square Garden. The sandwich, comprising a seared 5 oz. New York Strip served on a brioche bun with caramelized onions and steak sauce, is the only thing on offer at the new concession stand (and it’s now on the menu at all of the chef’s steakhouses). Venue-goers in the Suite and Club areas of MSG can, however, order additional items, such as a baby iceberg lettuce salad and a filet mignon sandwich.
Madison Square Garden, 4 Pennsylvania Plaza, New York City 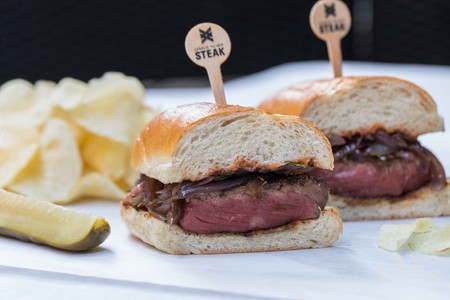