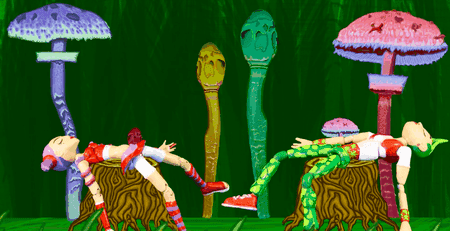 The one-day movie festival “Secrets of the Deep: Dreams on Film” celebrates what happens when we turn the lights out.

The exquisite Ms. Domination, a fan of German Expressionism and old Hollywood glamour, is onto something here. Occurring, like dreams, when the lights go out, films are nothing if not oneiric: to the viewer, at least, each movie is a succession of unbidden, unexpected images welling from somebody’s unconscious that may amount to a coherent or incoherent narrative. Dreams within films can either clarify or obfuscate a movie’s meaning: think David Lynch’s Mulholland Dr (2001). 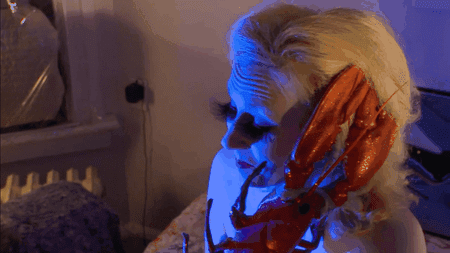 To see a selection of ingenious shorts that present or talk about dreams consciously, New Yorkers should head over to the Gene Frankel Theatre in NoHo on Thursday, January 25, for the 11-film festival “Secrets of the Deep: Dreams on Film.” Curated from 415 international submissions, each of the films is between five and 10 minutes long. The festival, which includes Marti Domination in the Life of Dreams, starts at 8pm.

There is a wide diversity of approaches to the films on display. In Liz Tabish’s fable Cecilia (2017), the eponymous beautiful woman (Lindsey Lemke), who lives alone in a seemingly American medieval village, confesses to her priest that she has been dreaming of her fellow villagers partaking in an orgiastic masque.

The priest warns her that the local women suspect Cecilia of trying to lure their men away through her solo nocturnal dancing and singing. The king and queen eventually condemn her as a witch. Cecilia itself condemns the vilification of female sexuality. Cecilia‘s faux medievalism might put viewers in mind of Roger Corman’s The Masque of the Red Death (1964) or Anna Biller’s The Love Witch (2016). 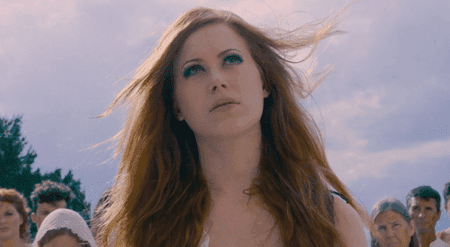 Set in the 1950s, Emily O’Brien’s Too Close (2018) follows a handsome young couple (O’Brien and Jerome Charvet) on a day out in the countryside. After they’ve had a picnic lunch, the woman wanders in and out of sleep and dreams about her supposed relationship with the man.

She imagines (or dreams) of cutting their photo portraits in half and joining them into a single image, asking the man if they’ve become too close. To her satisfaction, she measures up to the man’s criteria for the perfect “dame”—proving herself suitably passionate. When she awakes, we learn the exact nature of their relationship, which casts the entire movie in a different light.

Two become one in Too Close | © Emily O’Brien

One of the most disturbing films in the program is Anywhere Out of This World (2016), based on a story by the Oscar-nominated British actress Samantha Morton and co-written by Morton and director Douglas Hart, formerly of the Scottish band The Jesus and Mary Chain.

A little girl (Kacie Anderson) who has fled from an incident of sexual abuse, or who has witnessed sexual activity, dreams about the incident, and her flight from it. Her nightmare is spliced with images from Stanley Kubrick‘s 2001: A Space Odyssey (1968), which she has dreamed watching alone in a screening room; Keir Dullea’s astronaut takes on a sinister meaning for the girl. Shots of her searching for something in the theater indicate the dream is a dream of loss—probably of innocence. 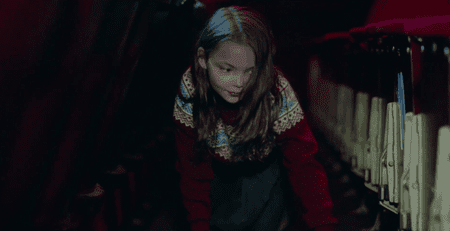 Kacie Anderson in Anywhere Out of This World | © Douglas Hart

Some of the films in the festival are more nakedly surrealistic. Joe Whitney’s Pas Catholique (2017), a witty meditation on Catholicism, repression, and sadomasochism, draws on the 1920s French surrealist tradition; its dominant motif is the disembodied head of a man (Cyril Roy) who may or may not be a monk.

Russian animator Olga Kusa’s gorgeous A Mushroom Trip, which in its psychedelia owes something to the Beatles film Yellow Submarine (1968), captures the dreams of two futuristic punks—a couple—after they simultaneously fall asleep while tripping on magic mushrooms.

The dreams have a paranoid quality. Bats fly out of the girl’s head and a humanoid crow carries her away; a flower with snapping jaws gobbles up the boy and, its head snapped off, becomes the mode of transport that drops him in a mushroom broth. In keeping with the film’s opening slogan, “Film against drugs,” the couple wakes to the realization that they don’t need hallucinogens—just each other.

Another paranoid dream appears to be the experience of a young woman (Marion Saint Jean) gadding about New York City at night in Stephen Rutterford’s Back Page Ripper (2016). Discovering that a newspaper and books in a book shop have all had their last pages ripped or ripped out, she gives chase to the paper monster responsible. What does it signify to not be able to read a last page? A fear of not being able to finish anything or ever achieve closure?

Perhaps the lasting message of the “Secrets of the Deep” festival is “be careful what you dream of”—you might just get it.