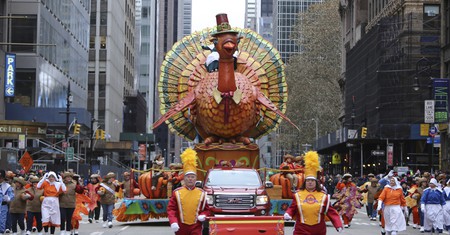 From how to score the best view of the Macy’s Thanksgiving Day Parade to where to buy the pies and cakes your feast can’t live without, here’s everything you need to know to tackle Thanksgiving in New York City.

On Thursday, November 22, 2018, Central Park West and Sixth Avenue will swell with towering character balloons, intricately adorned floats, marching bands, theater performances and millions of spectators for the annual Macy’s Thanksgiving Day Parade. What began in 1924 as more of a Christmas parade – brimming with animals borrowed from the Central Park Zoo and four bands providing a festive soundtrack – has since morphed into the balloon-filled, dancing-and-singing extravaganza we know today.

But Thanksgiving in New York doesn’t revolve solely around the annual parade. Many restaurants are capitalizing on Americans’ yearly yearning for roasted turkey and sausage-flecked stuffing, offering prix-fixe menus designed to celebrate all your favorite November staples. And for those who have been charged with bringing dessert or need to pick up something sweet for a Friendsgiving party, there are plenty of excellent bakeries across the city whose expert staff will do all the baking for you.

Here’s everything you need to know about celebrating Thanksgiving in New York City.

What to know about the Macy’s Thanksgiving Day Parade

When and where is the parade?

The parade kicks off at 77th Street and Central Park West at 9am, unspooling down Sixth Avenue before culminating in front of Macy’s at Herald Square at noon. 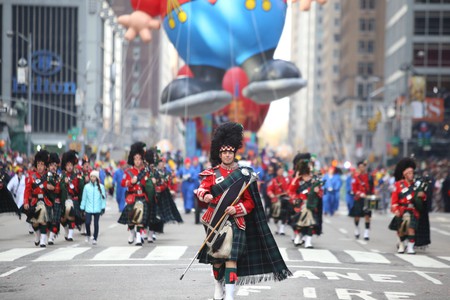 How do I get to the Macy’s Thanksgiving Day Parade?

The streets will certainly be crowded, so your best bet is to head below ground. You can take the 1 train to 72nd Street or 66th Street and walk east to find a spot along Central Park West, hop off the 4, 5 or 6 train at 42nd Street and walk west, or take the A, C or E train to 34th or 42nd Street.

Where are the best spots to watch the parade? 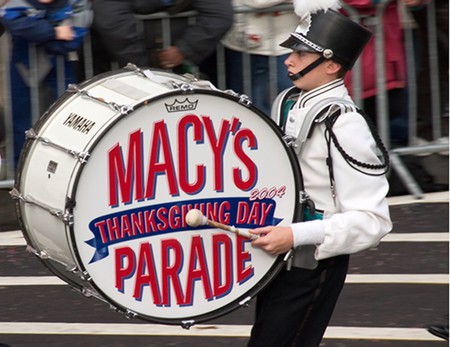 What should I bring to the parade?

Stock up on snacks and water; once you’ve found a spot, you’re not going to want to (and will likely be unable to) move. It will probably be chilly, so gather your finest winter wear and pop a few palmable hand warmers into your mittens.

What if I want to see Macy’s Thanksgiving Day Parade balloons being inflated?

On Thanksgiving eve, between 1pm and 8pm, head to the Upper West Side to watch the balloons swell to life. The line starts at Columbus Avenue and 73rd Street, curling its way uptown; you’ll weave your way around the American Museum of Natural History, watching as the once flat Olaf and Santa-hat-clad SpongeBob emerge puffed up and fully expanded. 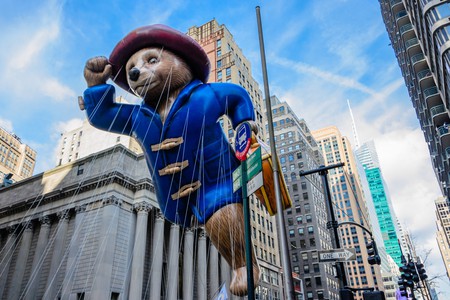 Where to eat a Thanksgiving meal in New York City 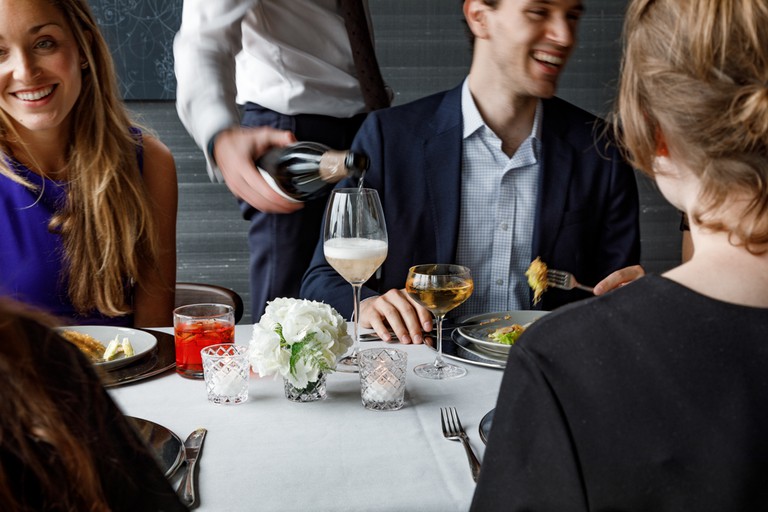 Hovering 60 floors above Manhattan is Manhatta, Danny Meyer’s impressive upscale French restaurant. For $120 per person, delight in a three-course prix-fixe menu dotted with dishes like chestnut soup with black truffles and turkey roulade with whipped potatoes and braised greens. Slices of specialty pies will also be available. 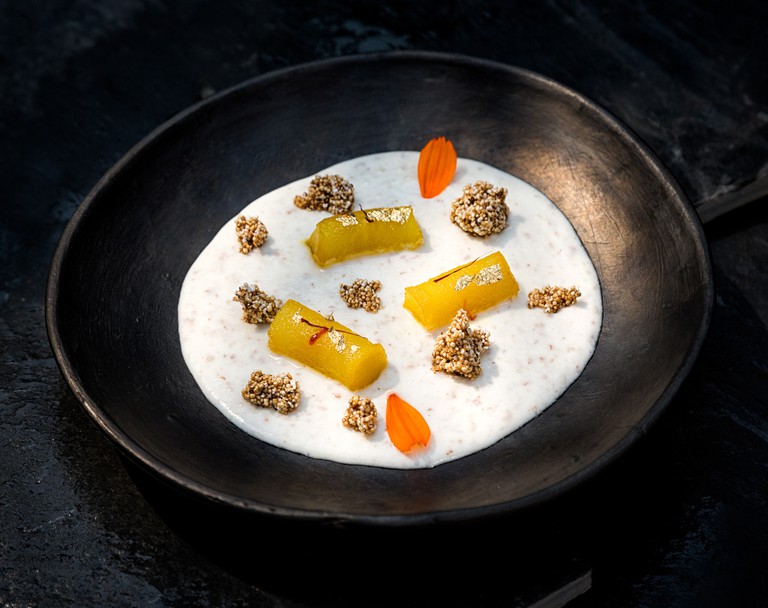 For an Indian twist on traditional Thanksgiving, Indian Accent in Midtown West boasts a $95 menu featuring roast turkey pinwheels rolled with sage, paneer and chili tomato, and kulcha stuffed with pumpkin and cranberry. 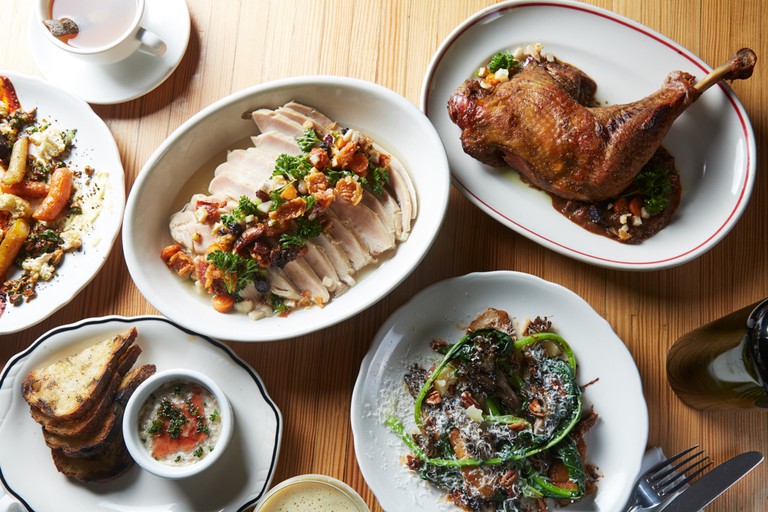 Eighty-five dollars will get you four courses at Houseman, a cozy American restaurant in SoHo. You’ll find dishes flecked with all your favorite November staples, like fall lettuces sprinkled with ham, apples, squash and yogurt, along with turkey legs slick with walnut-date sauce, flanked by cranberry sauce and gravy. Round out the meal with a slice of apple and parsnip pie. 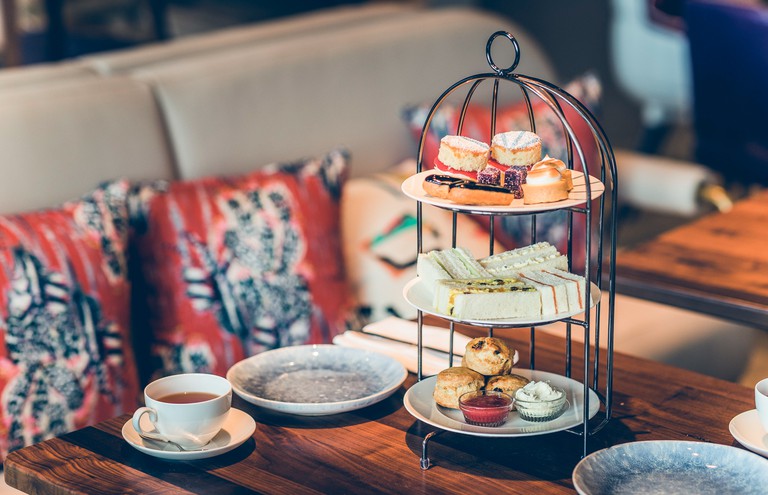 Housed along Columbus Circle, Bluebird London will boast unparalleled views of the Thanksgiving parade. As balloons float past Central Park, the restaurant will feature a Thanksgiving brunch buffet from 9am to noon, peppered with dishes like beef wellington, glazed root vegetables, pumpkin pie and raspberry and rhubarb streusel. 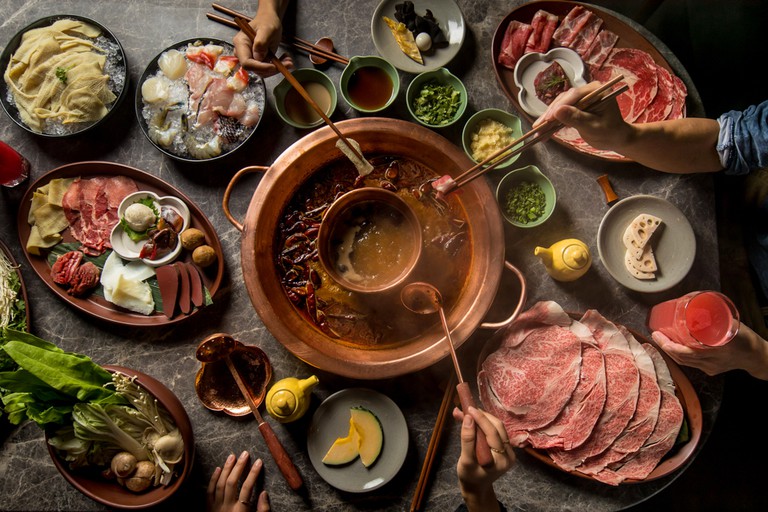 Share the labors of a hot pot on the Lower East Side, where groups will dip a host of meats, vegetables and fall staples like hunks of pumpkin and taro into a pumpkin seafood broth, crafting a multi-layered soup to be enjoyed at the end of the meal. Polish it all off with a complimentary scoop of Il Laboratorio del Gelato’s pumpkin gelato. 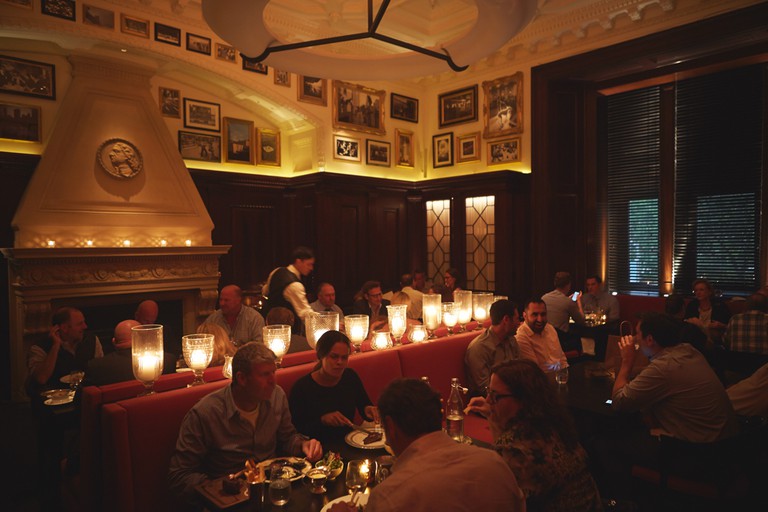 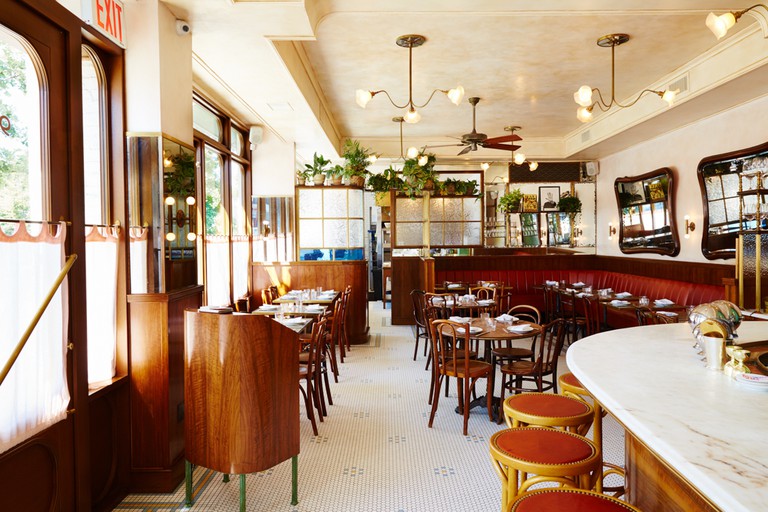 The Maison Premiere team is behind this Greenpoint restaurant | © Nicole Franzen

Perched at the tip of McCarren Park, Sauvage offers a Thanksgiving menu that leans French, featuring a frisée and chicory salad, chestnut cavatelli with delicata squash, short ribs with creamed spinach and potato confit and chocolate mousse. The three-course prix-fixe menu rings in at $68.

Where to buy Thanksgiving desserts in NYC 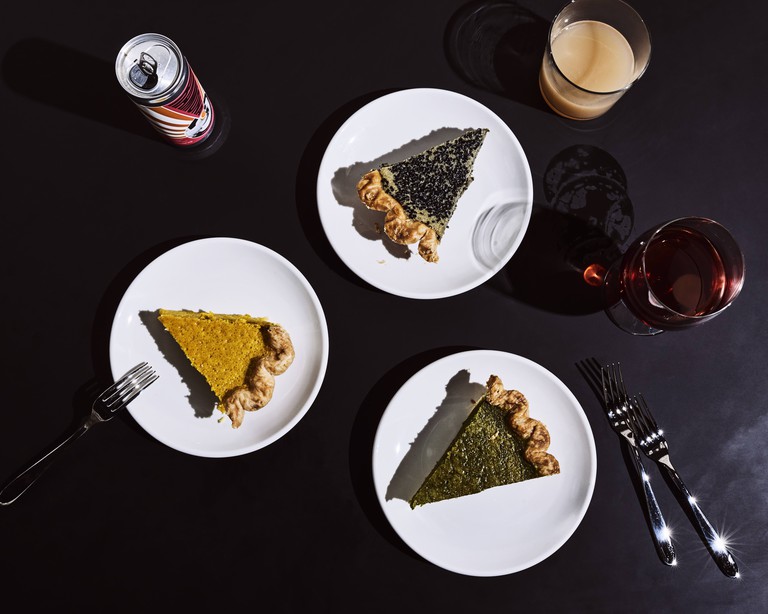 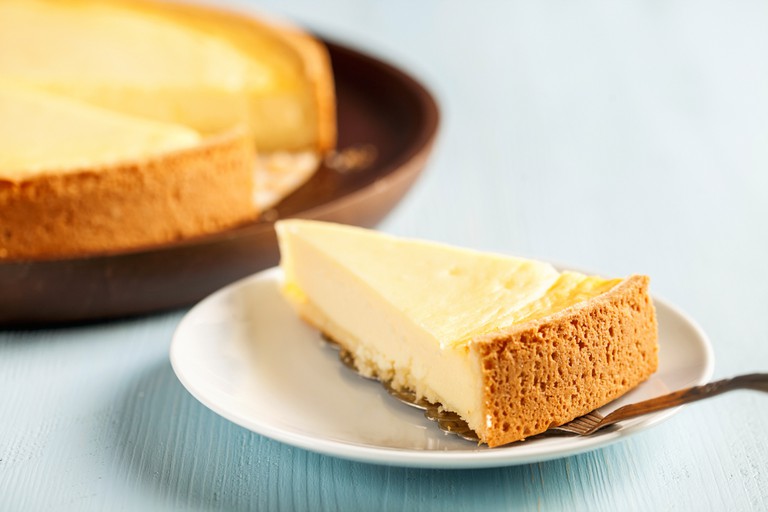 Cheesecake is among the selections at Two Little Red Hens, known as a go-to destination for cakes and pies | © NatalyaBond / Shutterstock

This Upper East Side bakery is a haven for cakes and pies. There are the usual pumpkin, pecan and chocolate pies, along with carrot cake streaked with buttercream carrots and a pumpkin harvest cake piped with apricot-pumpkin cream cheese frosting. Check out the special menu here.

For Thanksgiving, the wizards at Morgenstern’s esteemed downtown parlor are ditching ice cream in favor of pie dough, shrouding cinnamon and apples with pork-lard crust and piling salted-caramel custard pie into a pretzel base. Purchase one (or several) here. 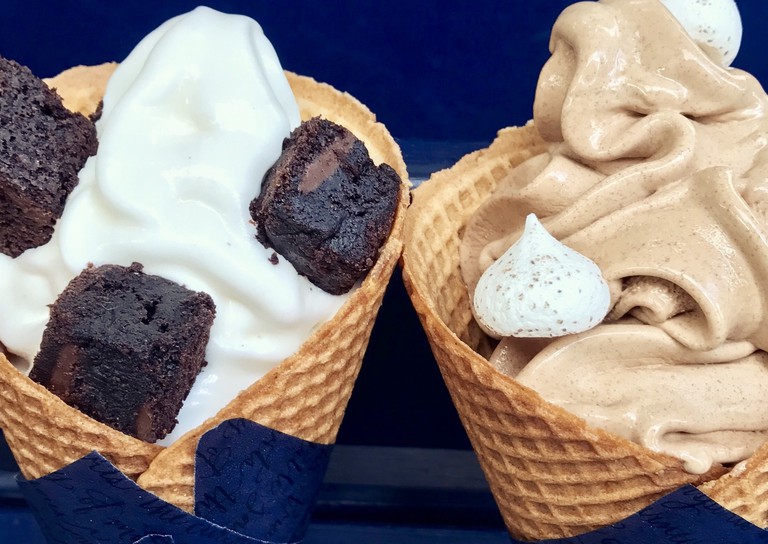 Restaurant, American, $$$
Facebook
Email
Twitter
Pinterest
Copy link
Share
Map View
For those with a hankering for something other than pie, head to Runner and Stone for a spiced pecan flourless chocolate tart and a dried-plum-and-walnut linzer tart. You’d be remiss not to snag a loaf of the cheddar stout bread for something on the savory side, or a cranberry-pecan levain bread. See the line-up here.
Open In Google Maps
285 3rd Avenue, Gowanus, Brooklyn New York, 11215, USA
+17185763360
Visit Website
Give us feedback
Give us feedback