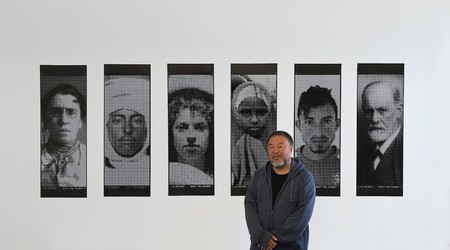 Together with the Public Art Fund, Ai Weiwei has partnered with eBay to sell limited-edition banners exhibiting six refugee portraits in honor of World Refugee Day on June 20.

Ai Weiwei’s monumental outdoor project, Good Fences Make Good Neighbors (2018), saw the multidisciplinary artist create 200 banners depicting immigrants and refugees from the 19th century through to the present day. Organized by the Public Art Fund, the banners were displayed on lampposts throughout New York’s five boroughs. Some of the portraits were adapted from historic photographs of immigrants and refugees arriving at Ellis Island, while others were taken by the artist himself as he visited some 40 refugee camps to film his documentary Human Flow (2017).

In an effort to bring awareness to the United Nations (UN)-sanctioned World Refugee Day, Ai has selected six laser-cut vinyl banners from Good Fences Make Good Neighbors, and recreated them as half-scale artworks that can be exhibited on a wall by themselves, framed, or installed as banners.

Five hundred editions of each portrait will be exclusively available on eBay at $750 a piece between June 20 and June 27, or until each artwork is sold. Patrons may purchase individual editions or the complete series of all six pieces.

All proceeds will benefit USA for UNHCR, a UN refugee agency that aids and protects citizens displaced by political conflict; the International Rescue Committee (IRC), created at the behest of Albert Einstein during World War II to protect those threatened by violence and disaster; and the Public Art Fund, an organization that brings contemporary art to the New York City public. The Public Art Fund has also pledged to donate a portion of their own proceeds to both refugee causes.

“I am happy that Public Art Fund and eBay are offering a special edition of six banners to support Public Art Fund, as well as USA for UNHCR and the IRC,” Ai Weiwei said in a statement. “The work is directly related to the history of human migration and aims to raise awareness of the humanitarian crisis happening today. It is a reminder of the artist’s responsibility to defend the understanding that all humans share the same meaning of life. I have always believed that to be the foundation of our aesthetic practice.”

The project is a collaboration with eBay for Charity, a special branch of the e-commerce corporation that “enable[s] members of the eBay community to connect with and support their favorite charities when they buy or sell in the US and abroad,” according to the press release. “Sellers can donate up to 100 percent of the proceeds to a charity of their choice, while buyers can add a donation to their purchase during checkout. To date, nearly $810 million dollars has been raised for charity by the eBay community.”

eBay’s senior director of art & collectibles, Sam Bright, said in a statement: “This special sale furthers our mission to use the power of our platform to impact significant causes, benefiting two essential organizations supporting refugees.”

The Public Art Fund’s chief curator, Nicholas Baume, noted in the press release that this collaboration fosters a unique opportunity for collectors to acquire powerful works by a major artist while supporting paramount causes. He went on to add that the “this powerful series of portraits that not only embodies Ai’s determination to bring attention to this urgent global issue, but also enables collectors to bring an aspect of Public Art Fund’s landmark exhibition, Good Fences Make Good Neighbors, into their own homes.”

To learn more about the campaign and to purchase an exclusive artwork, click here.