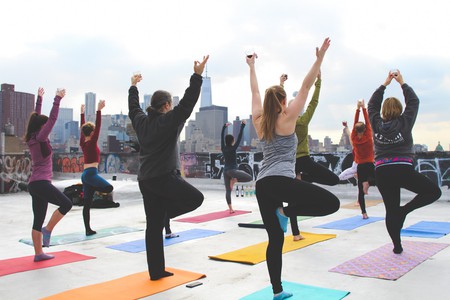 Yoga is a practice of presence, balance, strength and grace—things not generally associated with or aided by the consumption of alcohol—so it’s intriguing that Drunk Yoga, a class that blends vinyasa and vino, has taken off in New York.

At Drunk Yoga, students hold glasses of wine at their heart center, take sips between sun salutations, and wiggle their hips to the music while holding “vinobhadrasana”—a boozy spin on virabhadrasana, the Sanskrit word for warrior pose.

‘Wine brings people together, yoga brings you to yourself, so this idea of unity through community was really at the core,’ says Eli Walker, the class’s creator, who devised the concept in September 2017 following a conversation with an inflexible friend—the manager of Lower East Side bar Grey Lady. 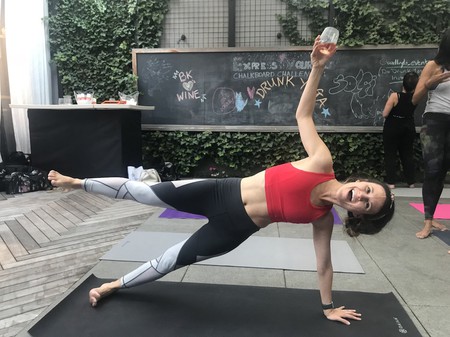 ‘I went home really excited and I created a sequence which was really geared towards having a party,’ she remembers. ‘We drink wine in weird beginner yoga poses and if you spill on your neighbor’s mat you have to pay them a compliment. And if you mix up your left and right feet you have to say something you’re grateful for. So even though it sounds really subversive and polarizing, it’s actually really true to its mission [of] lifting everyone’s spirits through a joyful experience for yogis and non-yogis alike.’

The first several classes at Grey Lady were so quiet, Walker jokes she was teaching ‘private Drunk Yoga’—but then a journalist friend wrote an article that went viral, and mat spaces suddenly began booking out. Now she teaches five times a week at bars in Lower Manhattan and Brooklyn, and hosts pop-up classes in special venues such as the Hamptons’ Ruschmeyer’s Hotel and the deck of the Ventura yacht in Battery Park. There’s even a book in the works, due out this November, titled Drunk Yoga: 50 Wine & Yoga Poses to Lift Your Spirit(s). 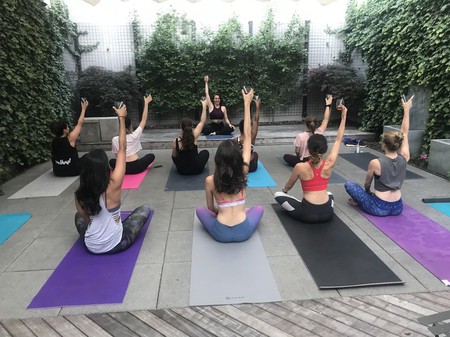 This meeting of alcohol and asana appeals to a certain demographic of people—mainly beginners who feel too intimidated to attend a regular yoga class—but Walker’s movement isn’t without its critics. The yoga community takes its practice pretty seriously, and some have even gone so far as to berate her on social media.

‘That said, every yogi who has tried the class, and/or knows me personally, understands my mission has integrity, and my class is safe, effective and fun for the population of people I’m targeting,’ Walker says. ‘Drunk Yoga is a subversive name for an alternative practice that may take yogis some getting used to, but over time I think most everyone will appreciate the company and class for what it is, and what it’s trying to achieve—unity through community.’