Drone Racing League Simulator Allows Anyone to Be a Pilot

Players of video games including Forza Motorsport or Gran Turismo Sport are able to live out their racing fantasies with some of the fastest and most powerful cars on some of the most breathtaking tracks and environments in the world.

Unfortunately, once the console is powered off, those experiences end as well.

Unlike those games, the new Drone Racing League Simulator allows players to not only gain valuable consequence-free experience flying a drone, but it can be a pathway to real-life drone flying experiences and races, including a contract for the 2018 DRL season.

“When people watch the DRL on TV and say ‘I want to try that,’ the simulator lets them do that,” said DRL CEO and founder Nicholas Horbaczewski. “It blurs the line between the digital and real worlds and our fans love that.”

“You can’t step into an F1 car and race around a track after putting down a racing game,” said Ryan Gury, DRL Head of Product. “The great thing about the DRL sim is that it perfectly matches a racing drone so at the end of the day, you can pick up a real drone and and fly it. That’s the biggest difference between our sim and a typical video game; this is made for the real world and real racing.”

The DRL Simulator, which launched on Nov. 15 on Steam, is improved and revamped from its initial incarnation from a year ago. The updated simulator makes first-person view (FPV) drone flying and controls as realistic as flying an actual racing drone. Not only do players get to test their virtual drone skills, but the top 24 global competitors (18 years old or older) will earn a chance to showcase their skills at the live esports-style 2018 Swatch DRL Tryouts on February 3, 2018. The winner of that competition will be rewarded with a $75,000 contract as the latest DRL pilot.

Jacob Schneider, AKA Jawz, not only earned a berth into the 2017 DRL Tryout in New York City via the simulator, but won the event and a spot on the real-life DRL roster. Jawz won an event during the 2017 DRL season as well, proving that success on the simulator can be translated to real-life racing success. 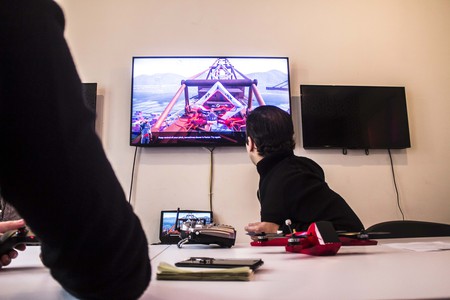 “One of things we’ve always wanted was this complete ecosystem, so now if you’re a DRL fan, you can watch it on TV, play the simulator and learn how to fly, and then you can fly a real drone,”Horbaczewski said. “It’s the whole drone experience. You can do one of those things or all of those things or combine them any way you want. We now give you one seamless way to do that.”

The updated simulator includes all DRL Season 2 maps from Miami Nights through the Munich playoffs and into the championship in London. The physics platform has been upgraded to make the digital flying experience as close to real-life drone racing as possible. Players are also able to customize their drone, whether it’s upgrading a motor or changing the quadcopter’s skin. Improved replays allows players to view runs and races, including from real-life DRL pilots, to see what paths they took during a course or how they made a certain maneuver.

Horbaczewski is a prime example, learning how to fly a real-life drone via the simulator and its 50-mission tutorial. Players start out with basic controls such as takeoffs and landings, learn about yaw, and altitude adjustments. The missions get progressively harder, incorporating more skills and advanced controls and maneuvers.

“The more hours you put into it, the more muscle memory sticks and the better you become,” Gury said. “You’ll save a ton of money on equipment and save a ton of time from piecing together a broken drone. It’s a shortcut to learn how to fly a drone properly.”