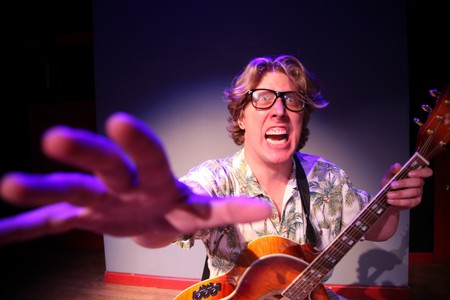 David Carl is a fast-rising comedian and improviser in the New York comedy scene who performs in various sketch and improv shows at The People’s Improv Theater in Manhattan. Right now, he’s preparing his international hit, Gary Busey’s One-Man Hamlet as Performed by David Carl, for its spring run at the PIT Loft starting on March 12th, 2016. We sat down with Carl for a closer look at his work.

What was the initial inspiration for Gary Busey’s One-Man Hamlet?

In May of 2013, producer Jaime Keeling cast me in Point Break LIVE as Angelo Pappas (aka Gary Busey). I had been doing the impression for a few years before being cast. I started to think that I should make my own solo show featuring Busey. I was riding the train to rehearsal one day, and I saw a poster for Alan Cumming’s One-Man Macbeth. That was it! Gary Busey would do a Shakespeare classic by himself! I just wasn’t sure when I would do it, but I couldn’t stop thinking about how I would do it. The more I thought about it the more I laughed, and because it’s New York City, no one cares when you laugh maniacally at your own ideas on the train. 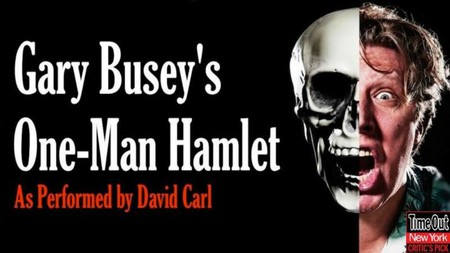 What has been the greatest thing to come out of this show for you?

I get to work on a show that I truly love with people that I love. Working with (director) Michole Biancosino is amazing. She’s one of my best friends and we really have gotten closer during this process. During SOLOCOM I met Peter Michael Marino, who jumped on as a producer to help us get to Edinburgh and beyond. Meeting Peter was huge, because without him we wouldn’t have gone to Edifringe. He’s an amazing producer and friend that really gets the show.

What is it about Gary Busey that makes him the perfect conductor for Shakespeare’s work?

Well, I think Gary Busey is the perfect person to cut through all of the intimidating thoughts about Shakespeare and to adore the playfulness that remains. He boldly attacks the text with the heart of a lion and the mind of a child. I play Gary with an unstoppable childlike energy. He is a force of nature who aggressively says ‘YES’ to everything that comes his way — especially problems, which he would say are ‘opportunities in disguise.’

What do you hope to accomplish with this show?

I want to keep doing it as much as possible. Playing in this show is pure joy. It feels different every time, and I just want to share it with as many people I can in as many places as I can. It would be fun to do this when I’m actually 71 years old! I’d also really love to meet Gary Busey and thank him for this incredible ride.

What do you believe is the finest Gary Busey performance?

Buddy Holly Story is tough to beat, and that’s a film that everyone should see. It’s one of the first biopics about a musician, and they recorded all of the musical numbers live with an audience. His acting is more vulnerable than most people are used to seeing if they only know him from Lethal Weapon and Under Siege. He’s still full of energy, but he shows a range that we don’t always get to see from him.

You took this show to Edinburgh last year — what was an international audience’s reaction to the show?

It was amazing to see how many people knew who Gary Busey was, and to hear why. In Edinburgh, almost every artist has to hit the streets and flyer for their show a couple hours a day. There are over 3000 shows, so flyering can yield a large chunk of your audience. As a result, I interacted with thousands of people as Gary Busey every day for a month. Quite a few Scots pronounced it Gary BUSsey (like bus), which was endlessly amusing. If they knew him, it was mostly from Celebrity Big Brother UK (which he won the year before), Point Break by way of Hot Fuzz, or the big surprise, Big Wednesday, which is an American surfing film from 1978 that is apparently huge in Scotland. Those that knew who he was thought the show sounded pretty crazy and wanted to come check it out. 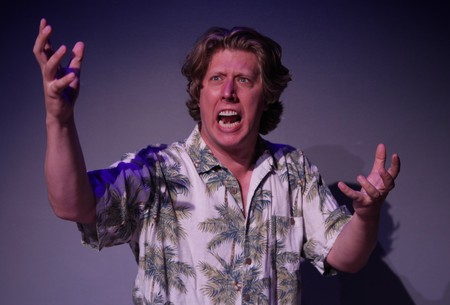 What are you up to next?

We’re taking Gary Busey’s One-Man Hamlet to Chicago for Shakespeare 400, a yearlong festival honoring the 400th anniversary of Shakespeare’s death. It’s hard to imagine a cooler venue for the show, other than maybe doing it at the reconstructed Globe in London, or at Busey’s house for Gary Busey.

Are there any shows in NYC coming up that you’re excited to check out?

I can’t wait to see Connected at 59 E 59 by Lia Romeo and comedian Katie Hartman’s Onion Show in April. I also can’t wait to see Mark Rylance in Nice Fish at St. Ann’s Warehouse, although tickets might be harder to come by after his greatly deserved Oscar win [for Bridge of Spies at the 2016 ceremony].

A native New Yorker, Daniel is passionate about writing and filmmaking. He spends his time wandering the city and boroughs. Whether it’s a comedy show, a new restaurant, or museum exhibit Daniel attempts to soak in as much of the city that he can.