A recent exhibition in New York showcased the work of Benin‘s voodoo temple painter, Cyprien Tokoudagba. Keiron LeVine for Another Africa, part of The Guardian’s Africa Network, looks back at the Beninese artist’s life and work. 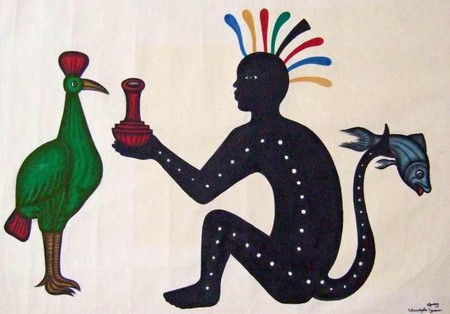 The late Cyprien Tokoudagba (1939 – 2012) had a talent for crafting windows into complex spiritual planes. He was thoroughly immersed in voodoo worlds dominated by haunting images of animal and human hybrids, saturated with Beninese motifs.

Tokoudagba’s artistic career began painting walls in his neighbourhood of Abomey. His work attracted voodoo (vodun) priests, who commissioned him to adorn temples in his own bold style, paving the way to an initiation into the society of Tôhôssou – the deity of water. 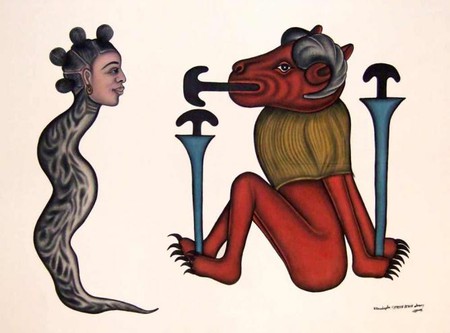 After building a reputation for himself, Tokoudagba was employed as the restorer of bas-reliefs on the walls of the Abomey palaces. In 1989 he began painting for commissions, allowing his grasp of voodoo idols and emblems of the Dahomey kings to flourish in a different context. The kings drew upon the powers of the animal kingdom, in both mythology and reality. When a new king was chosen from the dynasty of the 12 kings, a Bokonon or sorcerer was consulted on the appropriate animal representation. 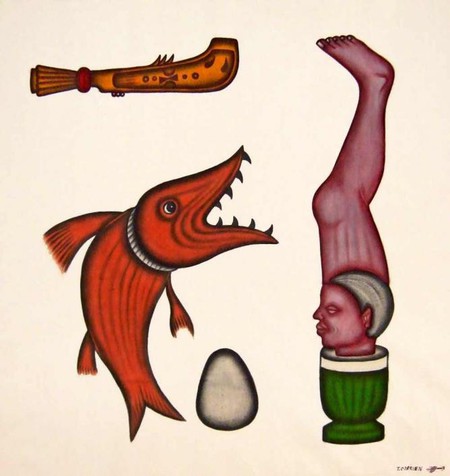 In Tokoudagba’s world a ram depicts Hébiosso, the voodoo god of thunder, whose lightning swift reactions punish crimes with a horned hammer – the symbol of judicial balance. Béhanzin embodied the power of a fish whose wrath summoned giant waves to crush his opponents. Guézo was represented by a brightly crested bird that illustrates his omnipresence throughout the kingdom. These animals differentiated between the 12 kings and formed an integral part of their legacies – a legacy shared with Tokoudagba himself. 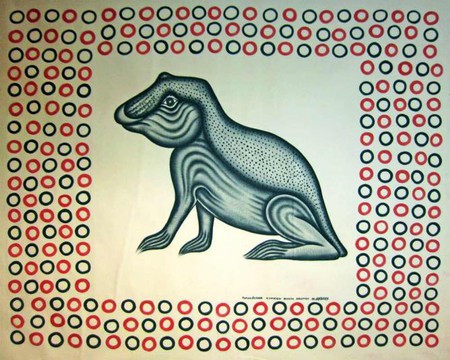 The mausoleum in which the artist now rests was crafted by his children Damien and Elyse Tokoudagba in the same Abomey and voodoo imagery that comprised his life’s work.

Tokoudagba’s remains are in the Gbècon Hounli district of Abomey, but the spirit of his work resides in contemporary galleries across the world. Nicolas Dubreuil of Galerie Degbomey exhibited two of Tokoudagba’s paintings at the Outsider Art Fair in New York in May. 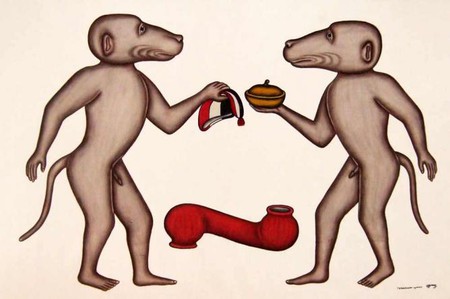 Cyprien Tokoudagba lived and worked as a painter and sculptor in Abomey in Benin. He made his name as the master painter of voodoo temples in Benin, Ghana, Togo and Nigeria. Tokoudagba worked for the National Museum of Abomey and participated in many national and international exhibitions, including the art biennials in Sydney, Sao Paolo, Dakar and Moscow, as well as at the Centre Pompidou (Paris), the Tate (Liverpool), the Hayward Gallery (London), the Mori Museums of Art (Tokyo), and the Smithsonian (Washington, DC).