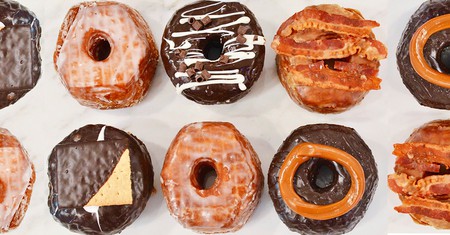 Before Buzzy Geduld garnered his fortune on Wall Street managing Herzog Heine Geduld – a market-making firm he later sold to Merrill Lynch for nearly $1 billion – he was a humble donut-shop proprietor. In the ’60s, he and his brother owned six donut shops in New York City, where they molded dough into puffed-up rings and plopped them into hot oil, swept floors and managed the business. The two later sold off all but one of the stores. The Donut Pub, which still stands on West 14th Street, hasn’t changed much since 1964. Holding onto that shop, Geduld followed his brother to Wall Street, taking with him a secret: how to successfully operate a family business.

“There’s no real difference in running a donut shop than running a brokerage firm – except the product is different,” Geduld explains. “The truth of the matter is everything I learned about treating a customer right, wanting a customer to be there five years from now, not just tomorrow morning, and making sure the product is the best possible product you can make [is the same on Wall Street].”

After selling his firm 20 years ago, Geduld is back in the donut business. He traded Wall Street for butter and sugar and swirls of chocolate icing. And he’s grown The Donut Pub for the first time since the ’60s, opening a second location on Astor Place. In the new space, the old-fashioned nostalgia that’s beloved on West 14th Street still radiates. 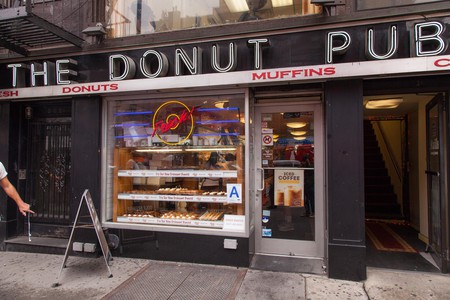 The Donut Pub in Chelsea has always exuded the charm of old New York. The letters of “The Donut Pub” are carved into red and yellow neon signs, with an exclamatory “Fresh!” lit up in the window to quietly entice passers-by. Even the inside feels like a time machine to the past, with a white counter lined with swiveling stools, loyal customers nursing warm mugs of coffee and racks and racks of sugar-dusted crullers, squat donuts showered with rainbow sprinkles and black-and-white cookies dripping with icing.

“Donuts bring back better memories of olden days and olden times,” Geduld says. “Maybe a simpler life. A couple of dollars and you could have a real treat that puts a smile on your face. It’s something that was around in World War I. There’s a history to it, and it tastes awfully good.”

The store is open every day around the clock, a mainstay on the otherwise ever-changing stretch of 14th Street between Seventh Avenue and Eighth Avenue. Competing businesses have come and gone since The Donut Pub first opened, including two Dunkin’ Donuts, but Geduld has never been concerned. 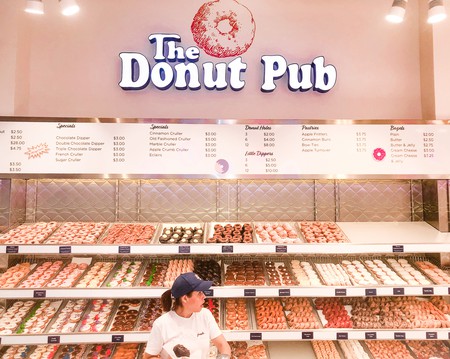 The new location is a bit splashier, but the donuts are still wonderfully old-school | Courtesy of The Donut Pub

“I think of it as David against Goliath,” Geduld says of the competition. “Here’s this massive company. We are just a little donut shop.”

Neither Dunkin’ Donuts lasted too long, yet The Donut Pub persisted. Locals and visitors have remained loyal to the family-run business over the years, popping in for a quick snack or sticking around to nosh on a sampling of classic donuts.

It certainly helps that all the donuts are handmade on site, crafted the same way they were when the shop first opened. There are plenty of old-fashioned favorites: French crullers and those simply adorned with vanilla icing and sprinkles. However, the shop has also changed with the times, dreaming up newfangled creations. Some are crowned with a shard of crispy bacon, while others are cloaked in colorful morsels of cereal. With the rise of the cronut craze, The Donut Pub launched its own take: sky-high croissant donuts drenched in chocolate cream and gooey marshmallow or piped with caramel.

“To me, the most important thing has always been the customer being happy,” Geduld says. “If you consistently have a great product and you consistently take care of your clients, it’s no different than being on Wall Street.”

Geduld is partial to the black-and-white Boston cream donuts – the shop’s nod to the classic black-and-white cookies, though he quite adores those, too. He often stops in to taste the donuts, critique the chocolate glaze and have a cup of coffee with his partner. For the Astor Place Donut Pub, he’s continued the family business with his middle daughter, Nancy, who’s managing the new store. 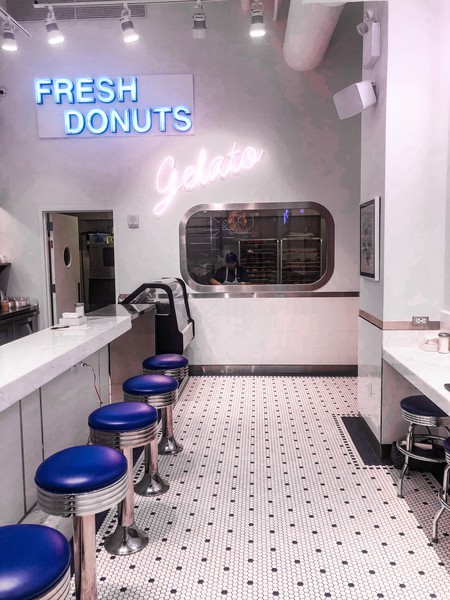 There is a new addition to the menu at the Astor Place location: gelato-stuffed donuts | Courtesy of The Donut Pub

“When I first opened it, I liked the idea of making different kinds of donuts,” Geduld remembers. “Now I think it’s great fun because I’ve become quasi-famous. People know that Buzzy owns this donut shop.”