Beyond the Reformer: Machine-Based Workouts To Intensify Your Pilates Practice 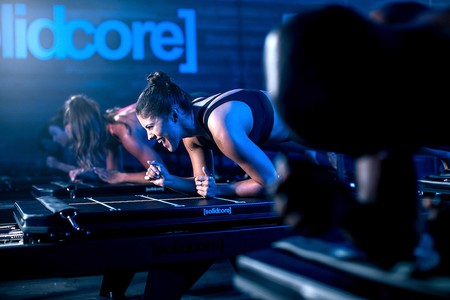 The Sweatlana machine has additional levels of resistance, which means it's hard to plateau | Courtesy of [solidcore]

Patented machine-based workouts in NYC are debunking pilates’s reputation as a gentle form of exercise.

It’s no coincidence that [solidcore]’s signature machine bears a resemblance to a Medieval torture rack. No more than three minutes into class, my muscles are begging for mercy. Our instructor gives rapid-fire orders with no water breaks, even going so far as to offer the room modifications to intensify each exercise. The guy next to me groans, muscles drowning in lactic acid, as I wet-noodle into the respite of child’s pose.

While Sweatlana, as [solidcore]’s machine is known, has similar features to a regular pilates reformer – a sliding carriage, weighted springs that apply resistance to each move and long straps for arm work – it feels far more challenging. That’s thanks, in part, to the plethora of resistance options. Even the lightest spring – the white one – feels seriously heavy, and with eight separate springs and countless combinations you’re unlikely to plateau. With so much resistance, it’s impossible to perform swift moves like you do on a reformer; every exercise is molasses-slow and activates the slow-twitch muscle fibers responsible for endurance and posture.

“The machine is relentless,” says [solidcore] founder and Sweatlana inventor Anne Mahlum, who opened her first New York City location in October 2018. “It always stays challenging. The constant ripping of the muscle fibers leaves me exhausted, and I’ve never seen results like this doing any other workout. And actually, I have not plateaued in five years [since the first studio launched].” 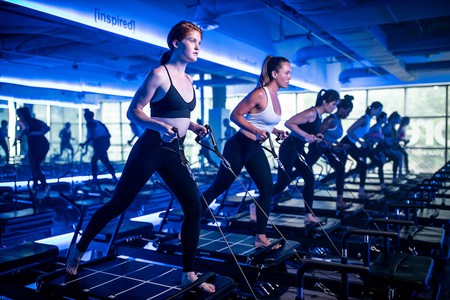 Mahlum, who has a preference for “the hard things” when it comes to exercise, never considered herself a pilates person. That was until she discovered Sebastien Lagree’s Megaformer – a patented machine that formed the basis for an ass-whipping workout blending cardio and strength with traditional pilates.

She launched her first studio in Washington DC with a Lagree license, but the frustration of not having autonomy over simple things, like working directly with the Megaformer manufacturers to arrange repairs, left her frustrated. It was time to strike out on her own.

Much to Lagree’s displeasure (he sued Mahlum for breach of contract), she sat down with a designer and created a custom machine. A stripped-down but extremely effective piece of equipment, it would form the basis of her fitness empire. Five years later, [solidcore] is known as one of the toughest and most transformative workout methods around, a multimillion-dollar business with more than 30 studios throughout the country.

Fellow Lagree alumnus and founder of WundaBar Pilates Amy Jordan also pioneered her own machine. The WundaFormer, she says, is like “the Swiss army knife” of fitness. The machine is a multifunctional piece of equipment that incorporates a jumpboard, a ballet barre, a reformer and a wunda chair (a spring-based piece of equipment with a seat, designed by Joseph Pilates himself in the 1940s).

“They’re such beautiful apparatuses with such unbelievable results. [But] I didn’t have the floor space, which is why I created [the WundaFormer],” Jordan says, “so we would have the same type of footprint [as a pilates reformer] but still be able to share these pieces of equipment with the general public.” 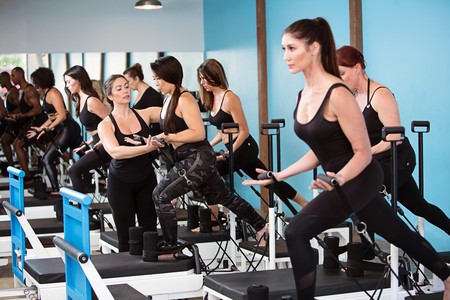 The WundaFormer has been embroiled in disputes with copycats since its inception back in 2012, and it now bears the tagline “so freakin’ good it’s patented.” The workout is challenging and sweaty without being impossible for newbies, and the precise instructions always border on anatomical. Jordan likes to say her studio takes an “inside-out” approach as opposed to an esthetics-focused outside-in one. You’re likely to hear instructions like “Move the femur upwards and contract the glute muscle” rather than “Squeeze the booty and pulse, pulse, pulse!”

“My goal was to bring that high-energy, fun, sweaty experience without losing the beauty of the work,” she explains. “When WundaBar came in it bridged the gap between traditional pilates, where at the end you’re like, ‘Was that a workout? I’m not really sure,’ and the [Megaformer workouts] of the world, where you’re like, ‘Oh my god. I’m not sure that’s a good idea for my body.’”

SLT (which stands for Strengthen Lengthen Tone) uses Sebastien Lagree’s Megaformers and now has 18 studios in New York State alone. It consistently lands on lists of the toughest fitness classes in the city and boasts a similar pace and style to [solidcore]. Although machines do build muscle fast, it can be hard to maintain correct form after a certain point. When your body is quaking and your muscles are giving up, injury is a possibility.

For [solidcore] clients, Mahlum strongly recommends three to four classes per week with proper rest days in between, ideal if you’re a busy New Yorker for whom efficiency is paramount.

“[solidcore] is for somebody who works hard in their life, in every aspect – their career, their family, their relationships, their body, their mind,” says Mahlum. “They want to be held accountable, they want to work hard, they want to be challenged, and they’re willing to work for the results [Sweatlana] gives them.”

They also have to get a kick out of their abs aching every time they laugh and their quads wobbling whenever they walk down the stairs. The cost of a stronger, hotter body. That and $40 per session.