Bartenders Tell: How to Spike Your Shamrock Shake 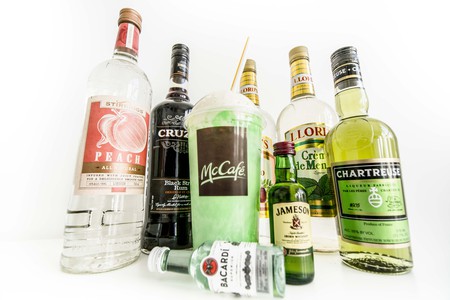 It’s McDonald’s Shamrock Shake season again. These heady weeks leading up to St. Patrick’s Day are the only time during the year to get a sweet, minty milkshake from the fast-food chain. You might call it the opposite-season equivalent of Starbucks’ Pumpkin Spice Latte: A limited-offering beverage with its own cult following. And while we’re not saying that the minty shake necessarily needs to be spiked, there are precious few liquids on this earth that can’t be improved with the addition of booze.

So we posed a question to a few bartenders and cocktail enthusiasts: What would you use to spike a Shamrock Shake? We got back some seriously creative and unusual responses. All seemed amazing in theory, but some of the proposed flavor combinations had us wondering, “how would this actually taste?”

There’s only one way to find out. We assembled a tasting panel and held a taste test in our offices.

We needed to establish a baseline for those of us who’d never had a Shamrock Shake before.

Graham: It doesn’t look too healthy.
Kathryn: There’s literally nothing natural about this.
Michael: Hello, old friend. O.G. Shamrock Shake.
Nikki: From good ol’ Mickey D’s.
Michael: I’m loving it.
Graham: It’s like drinking a puddle on Falls Road [in Belfast].
Jill: Like kaopectate.
Nikki: I can’t imagine it’s going to get any better with the alcohol.

Jill: So it’s like mint upon mint upon mint.
Michael: It’s a mint-ception.
Amber: I can’t tell if I taste a difference.
Jill: This tastes more chocolatey.
Nikki: This tastes better to me.Jill: After Eight mints? What are those mints?
Amber: Thin Mints.
Michael: Junior Mints?
Amber: They’re called Thin Mints.
Nikki: It still tastes like toothpaste.
Amber: Instead of brushing your teeth with a bottle of Jack…

One of our favorite drinking pals suggested this combination as a “poor man’s grasshopper.”

Jill: I’ve had really bad experiences with Jameson.
Amber: It tastes like straight Jameson.
Jill: I hate it.
Graham: It’s great. I could sit here all afternoon now.
Kathryn: …with your minty Jameson artificial…Amber: Actually, I kinda like it. This one tastes more like a milkshake rather than a mint shake.Nikki: I just can’t get over the green color of this.
Michael: Just close your eyes and put it in your mouth.
Nikki: Is that what you tell your ladies?

Brandon Sosa, a bartender at Suffolk Arms in NYC, suggested this one, saying, “Cruzan, with its rich molasses and caramel flavors, would kill it with mint and vanilla ice cream.”

Michael: It looks like Ecto-Cooler. You guys remember that stuff?
Jill: Ooh, that smell. The smell is very … If this wasn’t a mint shamrock, this would taste like cookie dough.
Nikki: Oh, this is a very interesting taste.
Graham: Coffee. It’s got a coffee thing to it.
Nikki: Yeah! Coffee!
Kathryn: It’s got a molasses thing to it.
Nikki: Molasses coffee.
Kathryn: I feel as though I should’ve calibrated the amount of liquor in this one down, to accommodate how strongly flavored the booze is. So that’s my bad. But the same amount of booze is in here as in the other ones. It just tastes really strong to me. Good? Bad? Amber: I don’t like this one.
Nikki: I like it. Probably because it masks the mint the most. Jill: It has a really strong aftertaste.
Amber: This one’s my least favorite.
Jill: Cacao is by far the best.
Nikki: Yeah, that was my favorite. This is my second-favorite.
Graham: My problem is it’s a bit like Baileys. To me these are like old lady’s drinks. Like what your aunt would drink.

Also a suggestion from Sosa. “Another good combo with the mint and vanilla,” he says, citing as his inspiration the tiki classic cocktail “Missionary’s Downfall,” made with rum, mint, peach, pineapple, lime, and honey.

Nikki: This tastes very dangerous.Amber: It tastes like the candy from the ice cream man.
Nikki: I love the way it smells. It smells like peach rings. Graham: There’s a candy in England called Dolly mixtures. And they have this flavor. It must be the peach, I think.
Amber: See, to me it tastes like Candy Buttons from the ice cream man. They have the piece of paper and the candy dots on them…
All: Ohhhhhh.
Nikki: My god, that is such a throwback. I know exactly what you mean.
Amber: That’s what it tastes like to me.
Nikki: Candy Buttons.

This suggestion comes courtesy of Michael Olsson, bar manager at 1656 in Copenhagen, who then admitted, “But to be honest, I have no clue what flavor a Shamrock Shake is.” Apparently they don’t exist in Copenhagen. His idea was seconded, though, by New Orleans-based bartender Danielle Gray of Doris Metropolitan, who says of Shamrock Shakes, “I love those damn things.”

Jill: I can’t stand this. It tastes like mouthwash.
Nikki: This is terrible.
Kathryn: This one I actually like. But it’s another one where the flavor’s so strong I should’ve used a lot less in here.
Nikki: It’s very floral and almost like potpourri.
Graham: It’s like when you go to the dentist, right?
Nikki: Oh, this is aggressive. It’s very aggressive.
Kathryn: I like it, but it tastes intensely like Chartreuse. Like the mint is intensifying the Chartreuse-iness of the Chartreuse.
Nikki: I mean, I think the downfall of all of these is just the mint. I blame the Shamrock.