Banksy Takes Over the Bowery Wall with a Powerful Message 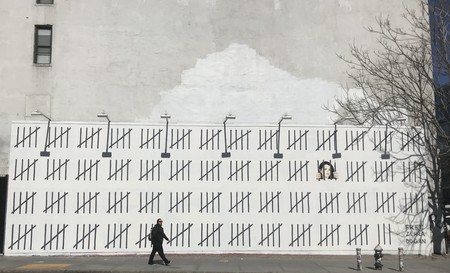 Located on the corner of Bowery and East Houston, the Bowery Wall has long served as a public exhibition space for street artists. The latest artwork showcased on this historic façade is a visual protest by none other than Banksy.

From Keith Haring to JR, the Bowery Wall has hosted an impressive roster of public works by well-known street artists throughout the years. On the evening of Thursday, March 15, a new artwork by the anonymous British artist Banksy was revealed. 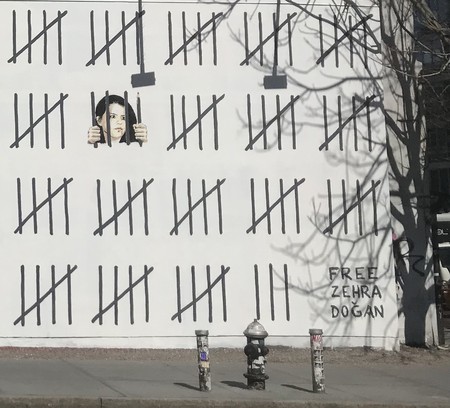 The mural showcases a white background with black tally marks that double as prison cell bars—one mark for each day that the Turkish-Kurdish artist and journalist Zehra Doğan has been imprisoned for a controversial painting she created. Hyperallergic reported that her painting was temporarily projected above the New York City-based artwork last Thursday night.

In March 2017, Doğan was sentenced to two years, nine months, and 22 days in jail for painting the aftermath of a Turkish raid on Nusaybin, a primarily Kurdish city in Turkey’s Mardin province, and the site of Turkish military attacks since 2015.

In Doğan’s rendering of Nusaybin’s destruction, which was inspired by a photograph taken of the rubble, the ruined city is dotted with victorious Turkish flags. After the artwork circulated on social media, Doğan was arrested in July 2016.

According to the New York Times, Doğan still has 18 months to serve. A portrayal of her face peers out from one of the cells, a pencil filling in for one of the bars to suggest the link between freedom of speech and criminal punishment. On the bottom right-hand corner of the artwork, a label demands, “Free Zehra Doğan.”

The mural is supposedly a collaboration between Banksy and street artist Borf, who has also been jailed for his work in the past. In a statement to the New York Times, Banksy wrote, “I really feel for [Doğan]. I’ve painted things much more worthy of a custodial sentence.”

Only a few days before the mural was uncovered, a Banksy rat appeared on the clock face of a building on 14th Street and Sixth Avenue. According to Hyperallergic, the rat is believed to be Banksy’s first work in New York City since 2013.