Awesome NYC Film Locations No. 3: The Brill Building in 'Sweet Smell of Success' 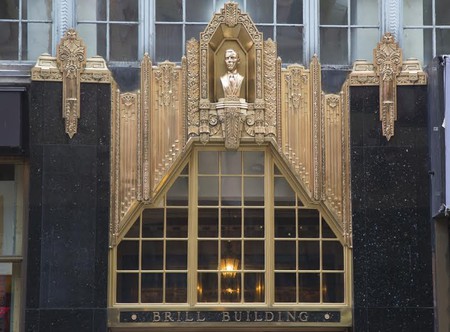 In Sweet Smell of Success, Alexander Mackendrick’s scathing 1957 film noir about a megalomaniacal newspaper columnist and a toadying press agent, the elegant lobby of the Brill Building at 1619 Broadway is a portal to hell.

All that glitters is soiled in Mackendrick’s masterpiece about corrupt power-broking in New York journalism. Even the gleaming, mirrored art deco lobby of the Brill Building, near the corner of 49th Street and Broadway on the northern end of Times Square, is spiritually tarnished by the presence of the syndicated gossip columnist J.J. Hunsecker (Burt Lancaster) and the sleazy press agent Sidney Falco (Tony Curtis).

Modeled on the New York Daily Mirror’s Walter Winchell—who was read by 50 million Americans at his peak in the 1940s and early 1950s—the brutal Hunsecker is the city’s dominant newsman. His paper is the New York Globe (situated at 200 Fifth Avenue and 23rd Street, near the Flatiron Building). His stock in trade is making and breaking lives. 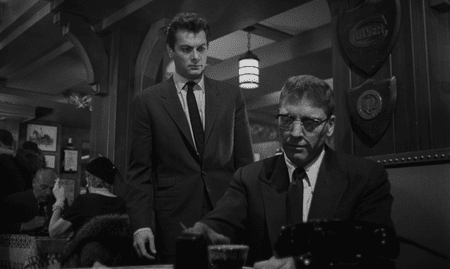 Falco is an unscrupulous flack desperate to get his clients in Hunsecker’s columns. At the start of the film, he is being shunned by Hunsecker for failing to carry out the big man’s order to break up the romance between Hunsecker’s fragile 19-year-old sister Susie (Susan Harrison) and the up-and-coming jazz guitarist Steve Dallas (Martin Milner).

Hunsecker, who lives with Susie in a penthouse at the Brill, is dangerously possessive of her. Clifford Odets’ screenplay, based on a Cosmopolitan novelette by Ernest Lehman, stops short of saying Hunsecker incestuously covets Susie or has acted on his desire, but the sickness in their relationship is implicit.

Opening on a brassily-scored, neon-crazy montage of Times Square, Sweet Smell of Success mostly unfolds in the restaurants—Hunsecker favors 21 on West 52nd Street—bars and jazz clubs where midtown’s scurrilous movers and shakers conduct business through the early hours. Falco pimps his girlfriend (Barbara Nichols) to one columnist and threatens to blackmail another. “I love this dirty city,” Hunsecker opines. 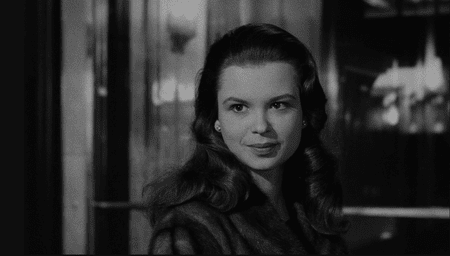 Susie is first seen entering the Brill’s lobby in the oversize fur coat her brother bought her. The building could be her refuge. However, Hunsecker’s perverse fixation on her turns their apartment into a gilded cage and their relationship into a Beauty and the Beast-like fable, one without hope of redemption or transformation. Faldo is on the spot when Susie—having been forced to part from Steve—decides to throw herself over the parapet. But that’s not the ending.

The land on which the Brill Building stands had been owned since the 1910s by the New York society families the Russells and Pynes, who leased it to to the Brill Brothers, proprietors of a men’s clothing store. In 1929, the Brills sublet the 13,000 square foot lot to the developer Abraham E. Lefcourt, who impractically planned to build the world’s tallest building there.

Lefcourt settled instead on a 10-story structure. Designed by Victor Bark Jr, and built in 1931, it was named the Alan E. Lefcourt Building for Lefcourt’s son, who had died from anemia at 17 the year before. The bronze bust of a serious young man that sits above the Brill Building’s Broadway entrance represents Alan. The Brills reacquired the building in April 1932 after Lefcourt defaulted on his lease.

Today may or may not have been the last time I saw this beautiful #lobby of my office building. Will certainly miss this😢 #brillbuilding #nyc #landmark #endofanera #約7年ほぼ毎日見た景色

Over the next decade, the Brill was transformed into its celebrated incarnation as New York’s Tin Pan Alley, becoming home to the local music publishing and recording industry. By 1962, it housed 165 music business companies. Among the songwriting teams who worked there were Burt Bacharach and Hal David; Carole King and Gerry Goffin; Jerry Leiber and Mike Stoller; and Neil Sedaka and Howard Greenfield. Numerous hit songs were churned out of the Brill over the years.

The Brill also became important in the New York film industry. It was home to such post-production facilities as Sound One, well-known for Studio J, where Foley artists added the sounds of thunder and galloping horses to movies and TV shows. Though he didn’t have such opulent digs as Hunsecker, the much kinder talent agent hero of Woody Allen’s Broadway Danny Rose (1984) kept his office in the Brill. 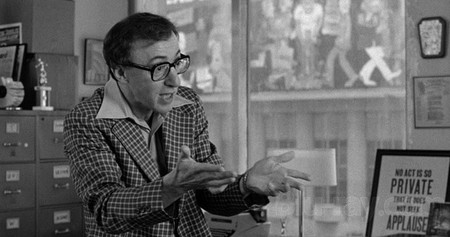 Some of the building’s glory faded when Jack Dempsey’s 37-year-old restaurant on the ground level closed in 1974. The long-standing Colony Records on the corner of 49th and Broadway—one of the last places to buy sheet music in Manhattan—shut up shop in 2012, as did Sound One.

Designated an official New York landmark in 2010, the Brill was acquired by the private real-estate investment company Allied Partners for $185 million in February 2013, reported the New York Times. Eric Hadar, the Allied chairman, said he was committed to preserving the building’s showbiz legacy in some form.

A J.J. Hunsecker Suite is not recommended.

Read on for more Awesome NYC Film Locations: No. 1: The Apartment; No. 2: Inside Llewyn Davis.