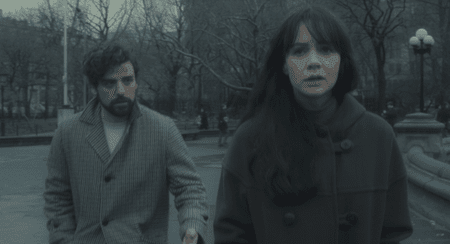 Visit the Greenwich Village park where Carey Mulligan swears up a storm in a Coen Brothers movie.

No matter how badly life treats Catherine Sloper in Henry James’s 1880 novel Washington Square, she would have been careful not to swear like a sailor when crossing the Greenwich Village park of that name. Times change, however, and Jean Berkey (Carey Mulligan) in Joel and Ethan Coen’s Inside Llewyn Davis (2013), heeds no such restraint.

“You asshole, you f***ing asshole,” Jean yells at the hapless title character (Oscar Isaac), a dogged fellow folk musician on the Village scene in 1961. Llewyn, it transpires, may be the father of the baby Jean has discovered she’s carrying. Her husband Jim (Justin Timberlake) could alternately be the father, but Jean doesn’t know who is responsible.

Even though she had extramarital sex consensually with Llewyn, and unbeknownst to Jim, Jean unreasonably feels Llewyn is entirely to blame for her pregnancy and that he’s got to pay for her abortion. When Llewyn asks her if she’s heard the expression “it takes two to tango,” she angrily dismisses it. 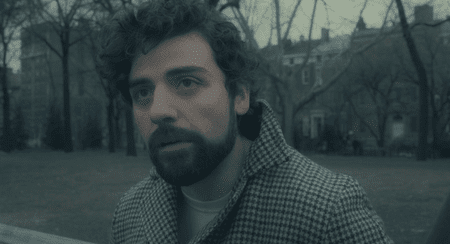 Jean berates Llewyn as they walk across Washington Square Park, which was converted from a military parade ground into a public space in 1849–50. The two head towards the southwest corner of the park and sit on a bench, where Jean continues her tirade.

The moody charm and grandeur of the spot on a damp, cold February day in ’61 is at odds with Jean’s comic invective. So, too, is the demure persona she adopts when singing in a Peter, Paul, and Mary-like vocal group with the cheerful Jim.

Later, when Jean and Llewyn meet in a café, she eases off the rancor and shows some momentary concern for him, homeless and jobless as he is. She has avowed that she wants to settle in the suburbs with Jim, who may not satisfy her in bed but is more stable than Llewyn. 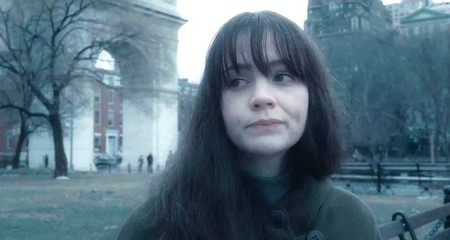 The film hints that she and Llewyn are better matched than she and Jim, and that she might be inclined to seek something more from Llewyn if he weren’t so stubbornly self-destructive. Or such an asshole.

Having raised this romantic possibility, the Coens deflate it by having Llewyn learn, late in the film, that there is a third candidate for the father of Jean’s baby. Dr. Austin Sloper, Catherine’s father, and even her romantic Aunt Lavinia would have been scandalized by such immorality. 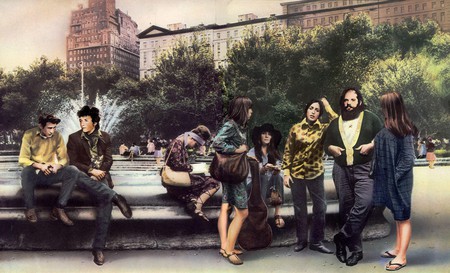 Washington Square was a mecca for folkies and Beat poets in the early 1960s, as witness Guy Peellaert’s sublime artwork—for his and Nik Cohn’s best-selling book Rock Dreams (1974)—of Bob Dylan, Joan Baez, Judy Collins, Allen Ginsberg, and Phil Ochs talking beside the park’s fountain. Looking at that springtime or summer image now, one wants to catch a glimpse of Llewyn Davis and Jean Berkey kissing (or more likely arguing) in the background. 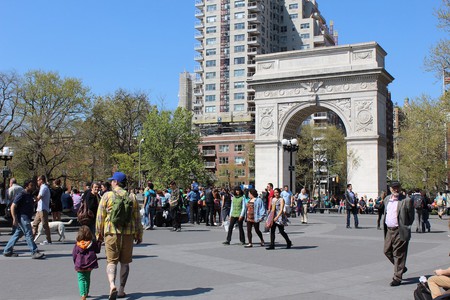 Washington Square Park, New York, NY 10012 is located at the base of Fifth Avenue between MacDougal Street and University Place. Take the A, C, E, B, D, or F train to West 4th–Washington Square; the N or R to 8th Street; the Q or 4, 5, or 6 to Union Square; or the 6 to Astor Place.