Awesome NYC Film Locations No. 11: The Conclave in "The Warriors"

Dorsey Wright and Michael Beck in "The Warriors" | © Paramount Pictures

Excepting Martin Scorsese’s movies, there isn’t a more kinetic ‘70s New York street film than The Warriors. Walter Hill’s cult gang warfare actioner both hypnotically depicts the city at night and offers an impactful display of intermittent violence on the run. The pulpy dialogue exchanges and the pristine quality of the images in grungy 1979 NYC make The Warriors preposterous, but it’s also tremendous fun.

The film’s best set piece unfolds between the seventh and sixteenth minutes. Nine delegates from each of New York’s top 100 gangs are summoned to Van Cortlandt Park in the Bronx for a midnight rally led by Cyrus (Roger Hill), leader of the city’s most powerful outfit, the Gramercy Riffs. Spearheaded by the ice-cool Cleon (Dorsey Wright), the Coney Island crew the Warriors speeds to the north-west Bronx on the train and gathers in a concrete conclave in the park with the other delegates. (The production managers hired a thousand extras from Manhattan’s Upper West Side.)

A near-messianic orator, Cyrus tells the gangs to stick to the unarmed truce that has brought them together peaceably. He claims that if they unite with the city’s other gangs and non-organized street fighters, they will have an army of 60,000 capable of defeating the city’s 20,000 cops and taking over the five boroughs one at a time. As Cyrus continues his speech—and patrol cars approach—events transpire to send the Warriors in desperate flight back to Coney Island. 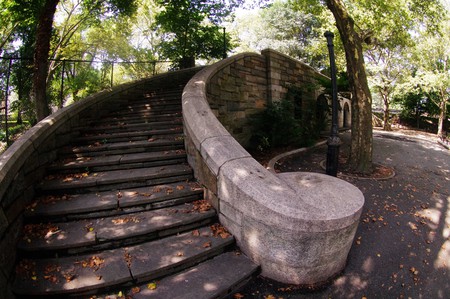 None of The Warriors’ locations were in the Bronx. Hill filmed the conclave sequence in Riverside Park at 97th Street and Riverside Drive. The exact location was the circle between the Dinosaur Park for kids and the site of the old arched stone comfort station (which was built for around $45,000 in 1934–37).

The film’s designers built tiers in the circle to make it look like a large amphitheater. The first shot inside it depicts a fire in a brazier. These design details—and the ensuing battles—visually connect the movie with the source of Sol Yurick’s 1965 The Warriors novel: Xenophon’s epic Anabasis (370 BC), which tells of the soldier author’s leadership of 10,000 mercenaries back to Greece following their victory over Persians at Cunaxa in present-day Iraq in 401 BC.

Hill expertly marshaled the nine-minute scene in the conclave. It’s a tapestry of long shots, medium shots, close-ups, and tracking shots—especially eloquent when showing the arrayed gang members listening to Cyrus—and a single slow-motion shot. The chaos that follows a murder and the arrival of the cops is intensified by whip-pans (rapid panning that causes the images to blur).

New York and its gang culture have changed radically since Hill shot The Warriors, but the movie remains a potent snapshot of racial and ethnic tensions in the city in the late 1970s. It’s also an ageless action film that’s superbly ignited in the teeming crucible of the park’s conclave. It’ll be curious to see if Joe and Anthony Russo can top it with their proposed series adaptation of the The Warriors for Paramount TV and Hulu.