At the MoMA, Skip van Gogh’s 'The Starry Night' and See This Gem Instead 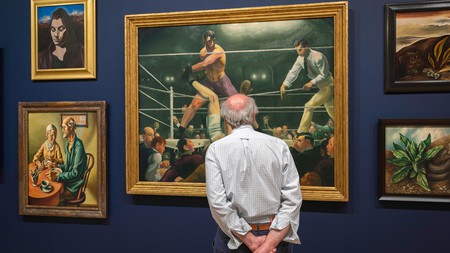 Which paintings should you head for in the MoMA? | © Michael Brooks / Alamy Stock Photo

While The Starry Night is a masterpiece, van Gogh’s swirly painting is always swarming with crowds. Make the most of your time in the MoMA and visit Rousseau’s surreal jungle landscape The Dream instead.

New York’s Museum of Modern Art has an evolving collection of almost 200,000 works, but there is one painting its nearly 3 million annual visitors almost all make a beeline for: Vincent van Gogh’s The Starry Night. MoMA lists it as one of the 10 pieces to see if you only have an hour; it tops Culture Trip’s list of paintings to see in NYC and The New York Times ran an op-ed deriding the selfie-snapping crowds that form around it.

Much like the Mona Lisa in the Louvre, MoMA’s The Starry Night is a cornerstone of the collection; however, in a museum filled with masterpieces, it gets undue attention. MoMA guests make themselves right at home in front of it, staring at the swirls and snapping pics, which causes a bottleneck that can be difficult to disperse. Instead of getting caught in the ebb, flow over to French Post-Impressionist Henri Rousseau’s 1910 painting, The Dream, located on the fifth floor in the Alfred H Barr Jr Galleries. 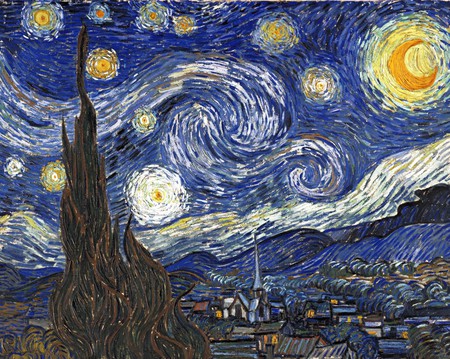 Standing at a grand 6 foot 8 inches (two meters) in height, and almost 10 feet (three meters) in length, this large oil on canvas painting is dense with imagery. “[Rousseau’s] work centered on exotic renditions of jungle scenes, and these are detailed with great precision,” says Ann Temkin, chief curator of painting and sculpture at the MoMA. The Dream, the last painting completed during Rousseau’s lifetime, is a busy scene illuminated by a full moon. Tropical flora and fauna dominate the background, but in the left corner is a nude woman, Yadwigha, modeled on the Polish mistress the artist had as a young man, reclining on a couch. Her presence adds a surreal element to the composition, and baffled critics at the time.

In a letter to arts writer André Dupont, as recounted in the book Theories of Modern Art: A Source Book by Artists and Critics edited by Herschel B Chipp, a University of California, Berkeley, professor, Rousseau defended the placement, stating, “The woman sleeping on this sofa dreams that she is transported into the middle of the forest, hearing the charmer’s pipe.” Barely visible among the dark bushes and shadows is a black flautist who serenades both the woman and a large, pink-bellied snake. Incredibly, Rousseau never left his native France during his lifetime and based his 25 or so jungle scenes on trips to the Paris Zoo, the botanical garden and images he found in books.

In the same correspondence, the artist says he was told he did not belong to the century in which he lived. Critics often misunderstood his work and were even hostile toward it. One Parisian journalist famously wrote, “Monsieur Rousseau paints with his feet, with his eyes closed.” Rousseau was largely untrained and did not begin painting in earnest until his 40s. As a result, he earned the somewhat derisive nickname Le Douanier (‘the customs officer’), a reference to his previous occupation as a tax and toll collector.

Though his technique was amateurish, Rousseau’s work resonated with many painters and poets. When The Dream debuted at the Salon des Indépendants in 1910, the poet and critic Guillaume Apollinaire wrote, “The picture radiates beauty; that is indisputable. I believe nobody will laugh this year.” 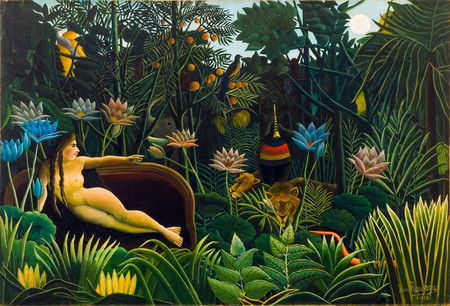 Sylvia Plath, who made numerous trips to the MoMA from 1954 to 1955, according to her journals composed a sestina inspired by the painting titled, ‘Yadwigha, on a Red Couch, Among Lilies.’ In it, Plath references the red couch perplexing onlookers, but reassures the subject that she belongs:

Yadwigha, pose on, that he put you on the couch

To feed his eye with red, such red! under the moon

In the midst of all that green and those great lilies!

The painting, despite Rousseau being deemed primitive, has been identified as featuring 22 shades of green.

Rousseau was admired by poet Wallace Stevens, singer Joni Mitchell (whose song ‘The Jungle Line’ is a direct ode to him) and painters Pablo Picasso and Wassily Kandinsky, the latter of whom said that Rousseau, “with a simple and convincing gesture has shown the way… and revealed the new possibilities of simplicity.”

The Dream, although not a technical feat, is an enduring masterpiece of modern art. Its visual lexicon inspired a future generation of art disciples and it deserves a special detour during any trip to the MoMA.