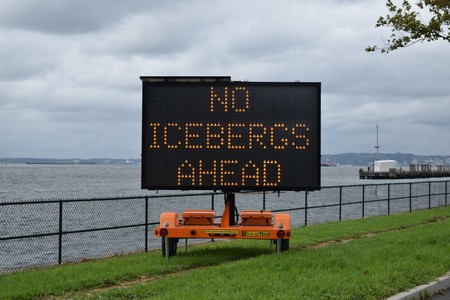 A new set of highway signs have appeared in New York, reminding those in the city about the issues that will arise from climate change.

New Yorkers are getting a very visible reminder of the perils of climate change, as a series of flashing highway signs spelling out warnings have been placed throughout the city.

The Climate Museum teamed up with a number of partners, including the New York City mayor’s office, to place the signs around the city as part of artist Justin Brice Guariglia’s Climate Signals project. Ten large solar-powered signs, that display messages such as “Climate denial kills” and “Climate change at work,” now dot locations in each of New York City’s five boroughs, including areas that are particularly vulnerable to rising sea levels.

Signs in neighborhoods with diverse populations also feature messages in languages commonly spoken in that area.

Sign locations include Flushing Meadows Corona Park in Queens, Sunset Park in Brooklyn and Yankee Pier on Governors Island. The installation will be in New York until November 6.

New York is a city surrounded by water, making it more vulnerable to the effects of climate change. A 2017 study by a group of climate scientists revealed that New Yorkers can expect increased flooding in the next couple of decades. In the past, floods of nearly 7.5ft (2.3m) happened only a couple of times per millennium. Today, the same sized floods are projected to occur every 25 years. By 2030, these floods will come every five years.

If New Yorkers want to avoid this type of disaster becoming a regular occurrence, they’d best heed the signs, both figuratively and in the case of Climate Signals, quite literally.