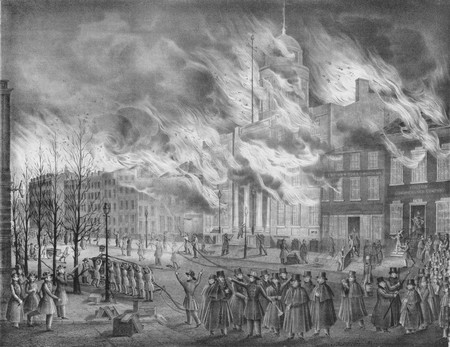 A blood-chilling winter snap took hold of New York City in December 1835, as the temperature plummeted to a bitter 17 degrees below zero, accompanied by fearsome gales rattling the shutters of the old Dutch churches. At this time, the financial locus of New York contained no skyscrapers to shield the city from the East River’s off-water winds. At the corner of Pearl Street and Exchange Place, a watchman caught the aroma of smoke, and within minutes a fire was raging out of control. We take a closer look at the Great Fire of 1835 through the lens of view painter Nicolino Vicomte de Calyo, who immortalized this historical NYC event.

For artists like Nicolino Calyo, chosen subjects often relied on elements of circumstance, and it would be a long, arduous road that would bring Calyo in view of a catastrophe that ultimately destroyed one-third of New York City. While in Naples, Calyo studied Neoclassical Italian and Dutch landscape painting at a prestigious academy that bore the city’s name. As a young man, Nicolino wound up on the wrong end of an unsuccessful rebellion against Ferdinand I, the Bourbon King of Naples, and was forced to take refuge with thousands of his kin at an exile community in Malta, where he taught drawing. 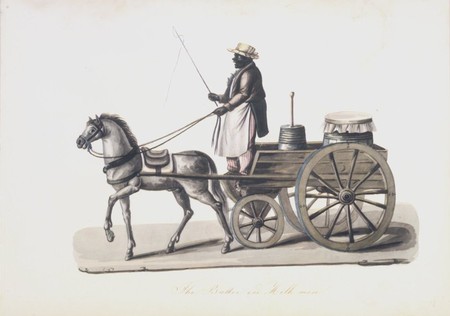 In 1833, Calyo went to Spain. Upon sensing similar unrest afoot, he fled at the outset of the Carlist War. By the time Nicolino had landed in the New World, he had already made a name for himself as an artist. First in Maryland, where he placed an ad in the Baltimore Republican that read, ‘Remarkable views executed from drawing taken on the spot by himself’; but by June 1835, Calyo had moved to his permanent home in New York City.

Nicolino Calyo’s technique included use of gouache watercolor. Derived from the Italian word guazzo (mud), this material’s history spans hundreds of years. As a mixture of pigment, water, and gum arabic (made from the hardened sap of an acacia tree), it differed in texture from the more commonly used English-style transparent watercolor. By the 19th century, it was already being manufactured. Many European artists preferred it for its speed in application and ability to layer. 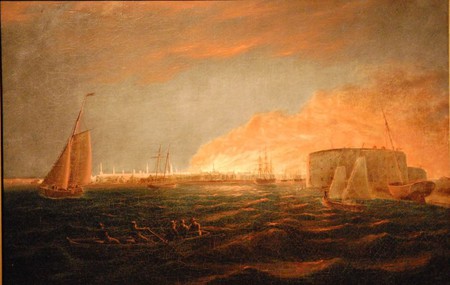 Alarm bells rang out and word of the fire spread as quickly as the blaze itself. It cast a medieval glow that could be seen as far away as Philadelphia. The subzero temperatures froze most of the water, including what should have run through the fire hoses. The unhindered wind hurled fire, gigantic plumes of smoke, and ash throughout the city, as windows exploded from the heat, and glass rained down on panicked civilians. Copper rooftops melted down to pools of molten metal.

Mayor Cornelius Lawrence could only look on, helplessly, as firemen and citizens scrabbled for any drop of water they could find – even by trying to punch holes in the frozen East River. Fireman were forced, ultimately, to blow up buildings and collapse them into a firewall.

Nicolino Calyo’s The View of the New York Fire Taken Near Mill I was observed from Brooklyn, depicting the financial center as a nearly indiscernible ball of flame as onlookers stare, helplessly, in awe. Calyo’s view paintings often contrast images of calm with those of chaos, which give them an aura of identifiable realism. This blend of conflicting movement embodies both the symbolic and ironic virtues of life alongside dramatic events. In The Burning of Merchants’ Exchange, Calyo uses vivid and pasty smears of reds and oranges to depict a sky camouflaged by flame. Yet from a rooftop, an artist appears to be sketching, almost placidly, while below firemen and others race back and forth in utter panic against the fire’s ferocity.

The immediate aftermath is depicted in View of the Ruins of the Great Fire in New York. This scene taken from the epicenter, Exchange Place, offers a vivid image of a budding financial center reduced to piles of smoldering rubble. Some scattered fires continue to burn in the background, and clouds of smoke still billow out of remaining hollowed-out structures. The foreground hosts a gathering of people, and some surviving items left unattended in the street. Calyo presents a graphic scene marked with a recognizable bewilderment.

Nicolino Calyo created a number of other view paintings, including works depicting the Mexican War (1846-1848), yet he was also known for his depictions of everyday life in the 19th century with his collection of portrayals, entitled Cries of New York. Calyo’s stunning views continue to amaze art enthusiasts of all measure. They can still be seen at The Museum of the City of New York and other locations around the world.