An Introduction To Cubism In 12 Artworks 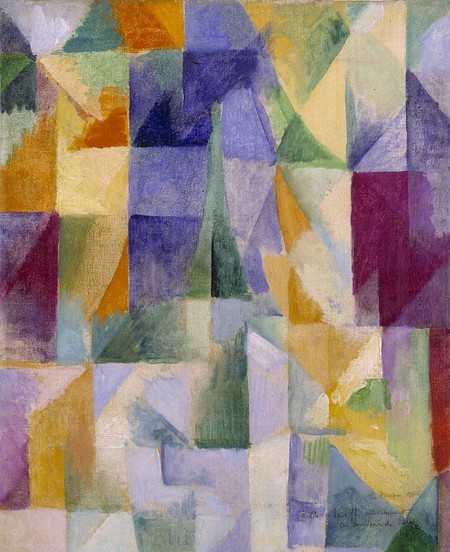 An early 20th-century art movement created by Pablo Picasso and Georges Braque, Cubism introduced the notion of fragmentation in art. Instead, artists within this stylistic movement wanted to focus on the two-dimensionality of the canvas and strip objects down to their basic forms, creating an incredible, unique style made up of abstract, geometric, fragmented planes. Here we take a look at Cubism in its various forms from the beginning to offshoots of the movement.

One of the founders of Cubism, Pablo Picasso’s Les Demoiselles d’Avignon is often referred to as the earliest example of Cubism, or proto-Cubism if you will. Inspired by Primitivism and African art, this painting breaks from traditional painting – with its realistic components and perspective – and into distorted planes. Depicting five women made up of softer geometric shapes and African mask-like faces, it gives viewers an idea of where Cubism is headed. Find this work at MoMA in New York City. 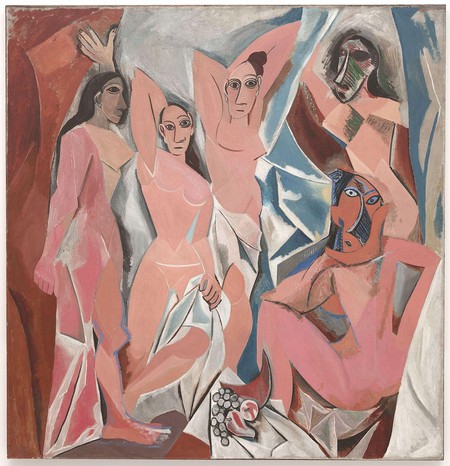 Georges Braque is the other co-founder of this movement, and one of his earliest examples is the Houses at L’Estaque, painted in 1908. This piece is very much influenced by Cézanne, who believed that art shouldn’t imitate nature and should, instead, implement geometric forms. A view of L’Estaque, near Marseille, Braque painted a scene of houses and trees on a hillside in abstract forms washed in neutral colors, something new and exciting, making it very important in the history of Cubism. Find this painting at the Kunstmuseum Bern. 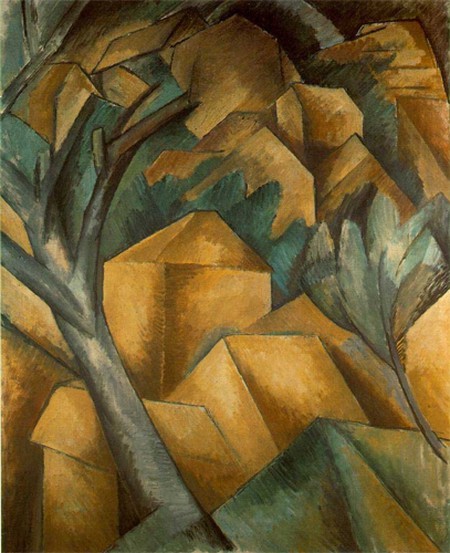 The early years of Cubism are referred to as Analytic Cubism, and Braque’s The Portuguese is an excellent example of this. Analytic Cubism saw the use of strong geometric shapes used to created fragmented works of art – resembling a shattered mirror – with the use of a monochromatic color scheme. A textural piece, Braque used small brushstrokes built upon each other to create this painting, giving the work a unique texture. The Portuguese can be seen at the Kunstmuseum in Basel.

Jean Metzinger was a French man of many talents – a critic, writer, and painter, to name a few – and he dabbled in many artistic styles throughout his career including Fauvism and, of course, Cubism. Referred to as ‘The Mona Lisa of Cubism’ by art critic André Salmon, who saw the piece at the 1911 Salon d’Automne in Paris, Tea Time features a woman having a cup of tea – shown in two perspectives – all composed of geometric shapes. Unlike Picasso’s and Braque’s works during this time, which were hard to decipher the objects depicted, Metzinger’s figures and object are much easier to see. While not on view, the painting is in the collection of the Philadelphia Museum of Art.

As indicated from the lettering at the bottom of the painting, the 1911-12 work by Picasso is called Ma Jolie, the chorus of a song often performed at one of Picasso’s haunts. Also alluding to its musical inspiration is the treble clef and other musical symbols placed near ‘Ma Jolie.’ Like Braque’s The Portuguese, this work is another fantastic example of the early years of Cubism, with its shades of muddy browns and sepia and overlapping planes forming the main subject – albeit difficult to see – a woman holding an instrument. See this one in person at MoMA in NYC. 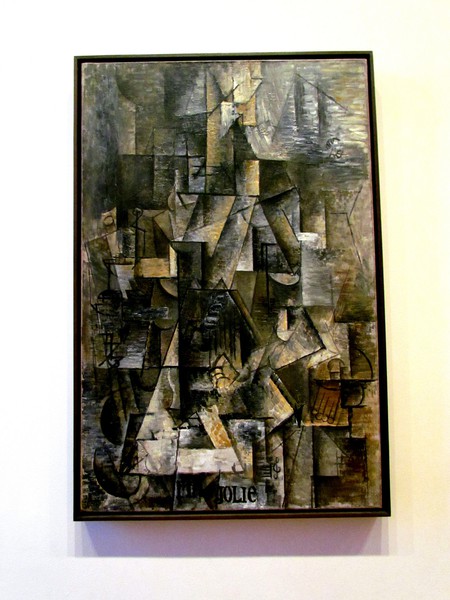 Cubism also translated into sculpture, as can be seen in Picasso’s 1912 piece, Maquette for Guitar. Created between October and December of 1912, this sculpture is made of paperboard, paper, thread, string, twine and coated wire, and just like Cubist paintings, this sculpture also broke away from traditional sculpture of the day due to its assemblage formation. This piece is representative of Cubism’s later style known as Synthetic Cubism, which, in general, saw more color, the use of different materials, and simplified shapes. This particular piece is in the permanent collection of MoMA. 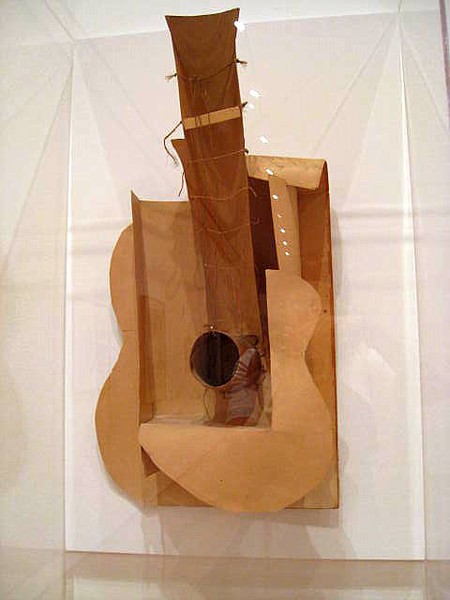 Painted in 1912, Windows Open Simultaneously (First Part, Third Motif) by Robert Delaunay is an explosion of colorful planes. While inspired by the Cubism ideal of fragmented forms, Delaunay was not necessarily inspired by the heavily lined monochromatic planes; rather imbuing his works with vibrant colors of purples, pinks, yellows, greens and blues – characteristics of a new art movement called Orphism, or Orphic Cubism, which was cofounded by Delaunay and his wife, Sonia. The name does not give the subject of painting away; however, if viewers look closely, they will see a faint outline of the Eiffel Tower in Paris. Delaunay made several versions with one being located at the Tate Modern in London.

Highly regarded as one of the most famous modern art pieces, Marcel Duchamp’s Nude Descending a Staircase No. 2 (1912) was shocking when it was first created. While it is often included in Cubist exhibits now, that wasn’t the case when it was painted. Indeed, it was rejected by several Cubist artists, including Duchamp’s brothers, because ‘A nude never descends the stairs – a nude reclines.’ It’s a unique piece because while we see the fragmented forms and neutral colors associated with Cubism, we also see the motion associated with the Italian Futurist movement. While not currently on view, this artwork is in the permanent collection of the Philadelphia Museum of Art. 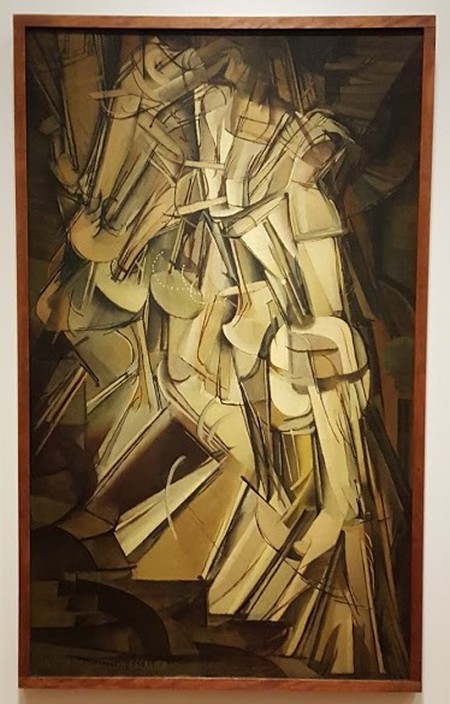 Spanish-born painter Juan Gris spent most of his life in France and was friends with artists such as Braque, Fernand Léger, Matisse, and Picasso. He started creating works reflecting his personal style of Cubism and worked in both Analytical and Synthetic Cubism, the latter of which saw him employ bold colors. An outstanding example of his Synthetic Cubism phase is the 1913 artwork, Glass of Beer and Playing Cards, which depicts snippets of various scenes including a frothy mug of beer and some playing cards, all of which are painted in Gris’ signature bold colors. This painting is located at the Columbus Museum of Art in Ohio. 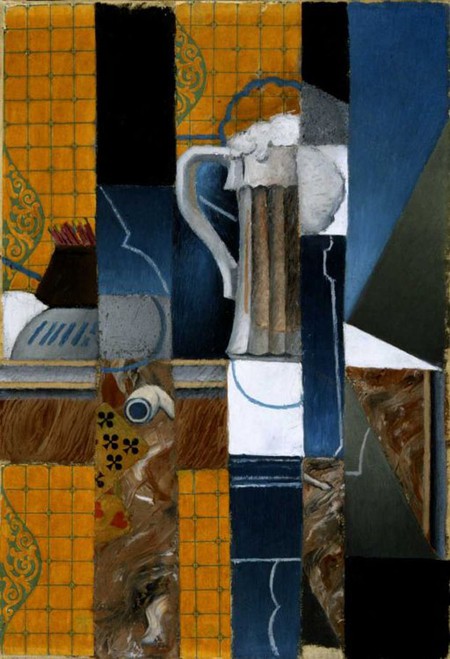 Painted a couple of years after the above work, Still Life before an Open Window, Place Ravignan is a late Cubist work in which Gris painted fragments of both indoor and outdoor scenes within the same frame. A still life comprising a newspaper, wineglass, carafe, among other items are placed in the foreground, while the background features outdoor scenery including leafy trees acting as a sort of shady cover. The painting’s unique, dream-like look is enhanced by vibrant hues of blues, greens, and pinks, along with black, oranges and browns. Art lovers can find the piece at the Philadelphia Museum of Art. 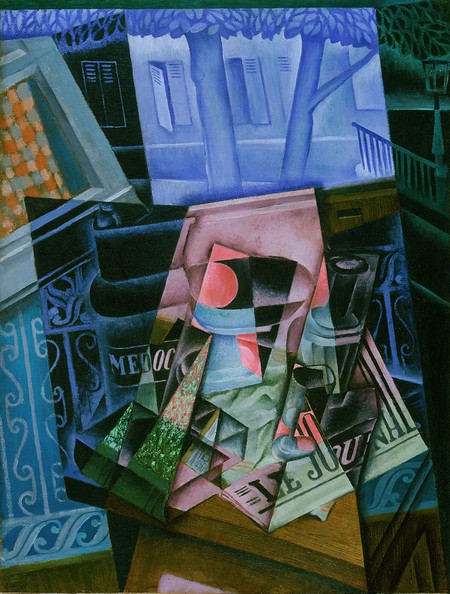 A French Cubist painter, Robert de la Fresnaye did not create the typical Cubist artwork when compared to Picasso and Braque. He was, however, very much inspired by their work, in turn, creating his unique style of Cubism. One of his greatest works, Conquest of the Air (1913), also happens to be a great example of this style. Located in the permanent collection of NYC’s MoMA, this painting depicts the artist and his brother sitting at a table with the French flag on the right and a hot air balloon floating in the skies above. Overlapping geometric shapes give the work a Cubist edge, but the bold coloring leans towards Delaunay’s Cubist-offshoot, Orphism. 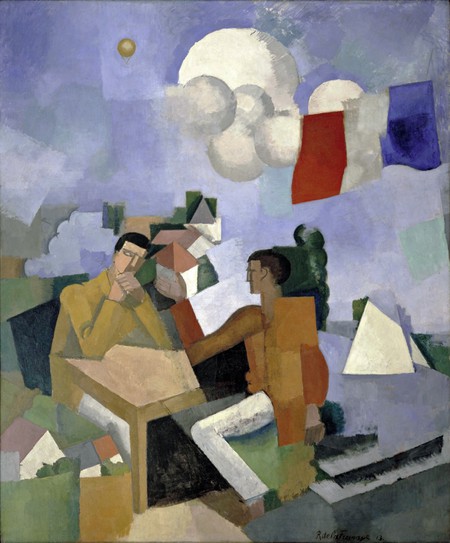 Before trying his hand at Cubist sculpture, Polish-born Jacques Lipchitz was known for creating Art Nouveau-style pieces. However, he became friends with the influential Gris, and his oeuvre began to shift toward the Synthetic Cubist style. One such example is the simply titled Sculpture from 1915-16, which, in Lipchitz words, is a limestone ‘abstract architectural sculpture.’ Beginning in 1916, just like Gris was doing in his artworks, Lipchitz eventually went on to make more recognizable forms rather than completely abstract.