In his first solo exhibition with Galerie Buchholz, New York City-based artist Sergej Jensen displays a recent departure from his ‘painting without paint.’ Born in Denmark in 1973, Jensen became known for his modern minimalist abstractions, compositions of found material and their marks. With work displayed in a range of exhibitions including MoMA P.S.1, New York (2011), Jensen brings to Galerie Buchholz pieces that, though primarily figurative, still linger with the artist’s abstract aesthetic. 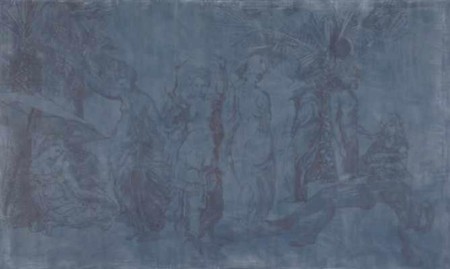 Often under the guise of a muted monochrome palette, the historical disconnection of Jensen’s apparently related characters can easily go unrecognized. Inspired by the changing compositions across art history, Jensen renders and positions together a variety of figures from the past. Such a subtle placement is not unfounded. Reminiscent of abstraction, the purposefully misaligned nature of this body of work is similar to Jensen’s traditional use of patchwork. Now, instead of piecing together various textiles, Jensen denies historically derived characters of their historical context through the uniformity of a canvas. In doing so, Jensen muddles and extinguishes time.

One blue ‘Untitled’ monochrome work demonstrates Jensen’s ability to disguise the historically unrelated nature of his figures under the illusion of visual uniformity. The largest of Jensen’s untitled works in this exhibition, the piece contains a series of solemn characters all seemingly unaware of each other. To the right of the image are four figures, the most striking of which includes a suspended nude body. Floating just above the ground, the man’s arched and surreal position juxtaposes the languid gestures of the paintings eight other characters. His visually represented agony, disjointed from the rest of the painting, forces the viewer to take an additional glance at the multitude of other gazes present. In doing so, you might be led to believe the other members of the painting could be united by this experience pain, hidden under the façade of their inept expressions.

Brimming with Renaissance- and Romantic-inspired characters, many of Jensen’s works continue to demonstrate an alteration of the past but through the simultaneous re-creation and destruction of art. Outlined with disconnected short brushstrokes, Jensen’s classical characters manifest as what they are, ghosts from the past. There in body and form, they are derived of life via the negative space of their interiors. Often faded and thus indistinguishable, many of these works appear as false relics. Unlike the pieces whose characters are deceivingly melded into one painting, these faded works leave the rest up to you to piece together.

Created from etched patterns and outlines made by black charcoal and red chalk, another of Jensen’s ‘Untitled’ pieces leaves you searching its sparse marks and almost incoherent forms for what appears to be a Romantic era narrative. In this work, a black cloaked woman and a man on a horse are positioned on either side of a forested path. Creating a barely distinguishable image, Jensen plays with line and negative space to recreate the visual traces of years long passed. Not unlike a tapestry with images that fade with the passage of time, Jensen’s Romantic scene reveals the falsehoods of historical representation and memory by reproducing and visually bleaching out an outdated aesthetic.

Jensen continues to traverse different spheres of art history by utilizing what appears to be the color and stylistic components pre-historic cave drawings. One ‘Untitled’ piece in particular demonstrates this tactic. With a foreground depicting a fallen rider and background showing an onslaught of horses and mounted riders, the event in question contrasts with its rusted earth-worn composition. Instead of positing unaligned characters into one uniform scene, Jensen creates a historical moment with the stylistic components of another time. In doing this, the artist conjoins high and low art, calling into question the artistic markers of time and space across history. 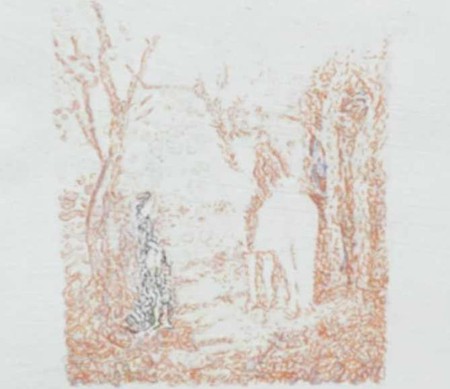 By utilizing the motifs of abstraction under the illusion of figurative form, Jensen creates a new aesthetic paradigm for himself that works to record, mock and question the notions of time and history through stylistic artifice. Images appear worn, as if from a bygone era. By reproducing and repurposing scenes and characters from across art history, Jensen manipulates and subverts linear time in the contemporary setting of Galerie Buchholz. In doing so, Jensen’s exhibition and new style challenges you to look at the everyday images of the present, and what the elements and time may soon render them to be.

After graduating from the University of California, Los Angeles with a Bachelor of Arts degree in Geography, Yazmine moved to New York City to work for an environmental non-profit. In her free time, she enjoys exploring cultural outlets and coffee shops, contemplating how the NYC subway was built and bracing herself for her first real winter.