A Look At Edward Hopper's New York House And Studio 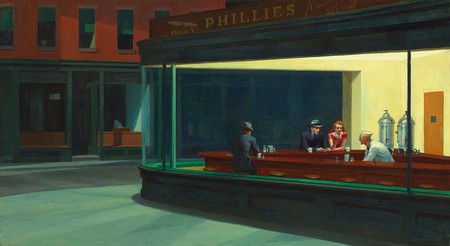 Nighthawks by Edward Hopper 1942 | © The Art Institute of Chicago/WikiCommons

Does identity define space, or does space create identity? American Realist painter and printer Edward Hopper’s (1882-1967) answer to this question was to blend light with light’s absence to create shadow and depth in strange and wonderful ways. His paintings have an astounding stillness that speaks volumes. Hopper’s work is easily recognizable and unmistakably Americana, depicting diners, gas stations, and NYC storefronts. From big retrospectives to the $40.5 million auction sale of East Wind Over Weehawken in 2013, Hopper’s reputation is longstanding. Born in Nyack in the Hudson River Valley, we take a closer look at this iconic artist’s home and studio.

Edward Hopper’s work can be gazed upon all over New York City and throughout the ti-state area, from the Metropolitan Museum of Art to the Whitney Museum of American Art, the Brooklyn Museum, Hartford’s Wadsworth Athenaeum, the Princeton University Gallery, the Yale University Art Gallery, and the MoMA. But two places are particularly integral to understanding his work: his Westchester County childhood home and his New York City studio. 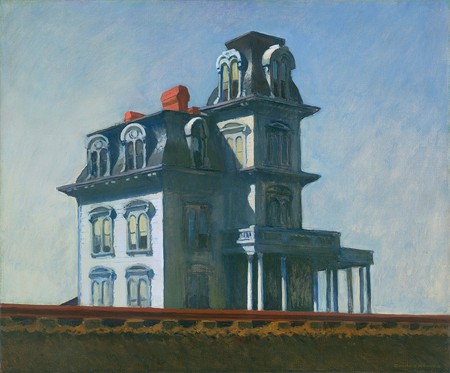 The House by the Railroad by Edward Hopper 1925 | © WikiCommons

Hopper was born in Nyack in the Hudson River Valley. The two-floor house that his grandfather built in 1858 resembles many of those he went on to paint. Listed on the National Register of Historic Places, it is among several picturesque homes on a quiet, residential street. In addition to special exhibits by artists other than Hopper, the Edward Hopper House Art Center sponsors a residency program allowing artists to live in his parents’ and sister Marion’s bedrooms.

Several of Hopper’s earliest works are displayed on the first floor, including watercolors of sailboats, a drawing on the back of his report card, and sketches of soldiers on the flip side of church raffle tickets. Personal items include his bicycle, paint box, and a large paint brush (six-foot, five-inch Hopper reached six feet by adolescence). Also of interest is a wall of side-by-side comparisons between Hopper’s landscapes and buildings, with Charles Sternaimolo’s photographs of their current condition. 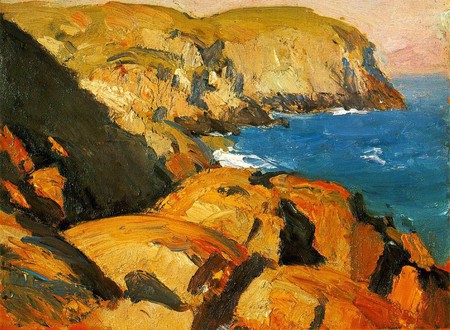 The windows of Hopper’s second-floor bedroom face the Hudson River, a short walk from the house. Even with the hellish traffic caused by the upgrading of the Tappan Zee Bridge (an eyesore under normal circumstances), it is not hard understanding Hopper’s earliest inspiration. In the center of the room sits the Center’s most recent acquisition: a large table that Hopper made himself. A New York University staff member rescued the table from the trash outside of Hopper’s studio following the death of his wife, Josephine, in 1968. Tables weren’t the only things that Hopper built.

Edward and Josephine Nivison Hopper lived at 3 Washington Square North (also known as ‘The Row‘) from 1913 until their deaths, nine months apart. The studio is located on the fourth floor of the third of 13 connected townhouses with strong political and literary ties to Old New York. Home to New York University’s Silver School of Social Work, (NYU bought The Row in 1949 but allowed the couple to stay), the Hoppers’ workspace is preserved alongside unobtrusive offices and study areas, promoting a healthy respect for the past, present, and future. 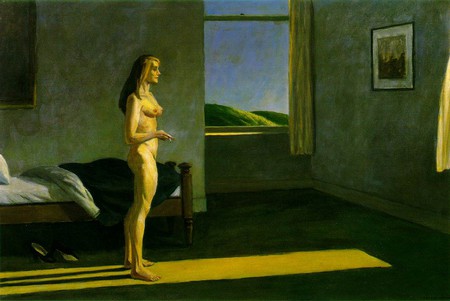 The studio emphasizes the working aspect of Hopper’s career, with his printing press, model’s pedestal, and canvas dryer prominently displayed. There is a special easel that Hopper built to accommodate his large frame. As in his Nyack bedroom, the front window provides a panoramic view, this time of Washington Square Park. On a sunny day, the two large, uncluttered, functional rooms feel like a real-life Hopper painting. It’s easy to imagine the creative life that he and his wife lived.