A History of the Belmont Stakes, a New York Horse Racing Staple 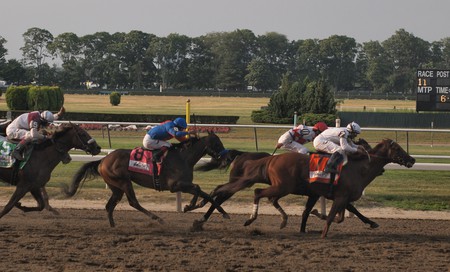 The Belmont Stakes is celebrating its 150th anniversary. Located just outside New York City limits at Belmont Park in Elmont, N.Y., the horse race is the oldest of the three legs of the American Triple Crown (Kentucky Derby, Preakness Stakes, Belmont Stakes). As Justify attempts to win the Triple Crown for the first time since American Pharoah (2015), Culture Trip takes a look at the history of the legendary race.

The Belmont Stakes, set to run for the 150th time in 2018, is named after New York businessman and political influencer August Belmont, who helped fund the race. Belmont was an avid sportsman who was heavily involved in thoroughbred horse racing. He was president of The Jockey Club from 1866-87 and owned two large horse-breeding farms.

The first Belmont Stakes took place on Thursday, June 19, 1867 at Jerome Park, located in the Bronx. The race predates the Preakness by six years and the Kentucky Derby by eight. The Belmont Stakes is the fourth-oldest horse race in North America, behind the Phoenix Stakes (now known as the Phoenix Breeders’ Cup) (1831), the Queen’s Plate in Toronto (1860), and the Travers Stakes in Saratoga, N.Y. (1864).

The original Belmont Park opened May 4, 1905 with a seating capacity of 11,000. Lauded as the most lavish track ever built in America, it was opened by August Belmont Jr. and William Collins Whitney. Belmont Park attracted an opening-day crowd of 40,000.

Being the final leg of the American Triple Crown lends the Belmont Stakes to heightened drama. After a horse has conquered the Kentucky Derby and Preakness Stakes, the Belmont and racing record books await.

There have been 12 winners of the Triple Crown; most recently American Pharoah accomplished the feat in 2015. Famed horse Secretariat won the Belmont (and Triple Crown) by a record 31 lengths in 1973.

Justify has a chance to sweep the Triple Crown on June 9.

“Now he has a chance to close the deal,” trainer Bob Baffert told ESPN. “It’s a lot of pressure, too. You’re in New York. The place is going to be rocking. You want to see superstars.”

The inaugural Belmont Stakes in 1867 was won by a filly (female horse) named Ruthless. Owner Francis Morris was awarded $1,850 and an English riding saddle.

300-400 The number of carnations used to make the blanket that is draped on the winning horse.

Three The number of fillies to win the Belmont Stakes.

90,000 The number of fans at Belmont Park who watched American Pharoah win the Triple Crown in 2015.

1926 The year the Belmont Stakes became 1 1/2 miles, the distance it remains today.