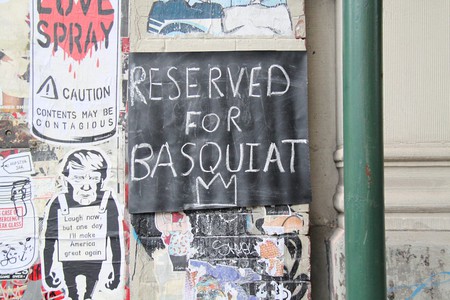 Artist Jean-Michel Basquiat conquered the New York cultural scene before his untimely death in 1988. From his roots in Brooklyn to his NoHo studio, Basquiat’s life and work were indelibly linked to his city of origin.

Jean-Michel Basquiat was born in 1960 to Matilde Andrades, a Brooklynite of Puerto Rican descent, and Gérard Basquiat from Haiti. The family lived in Park Slope and East Flatbush before Jean-Michel’s parents split and he moved with his father and two younger sisters to a Boerum Hill brownstone. 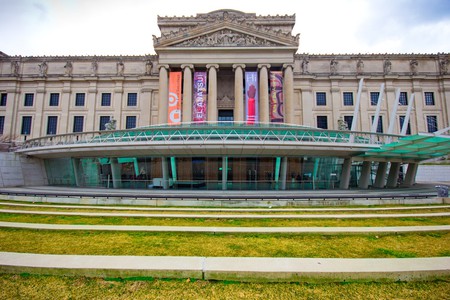 Even as a child, Basquiat displayed an exceptional affinity for drawing and stated a strong initial desire to be a cartoonist. His father, an accountant, kept the young artist supplied with paper; his mother, with a passion for visual art and her own penchant for sketching, introduced him to the city’s foremost art institutions, including The Met, MoMA and the Brooklyn Museum, where he was a young member from age six.

Basquiat attended City-As-School, an experimental high school program for bright students who work best outside the confines of the traditional educational system. Legend has it Basquiat, a notorious prankster, threw a pie in the principal’s face during his friend Al Diaz’s commencement ceremony in 1977. He was promptly expelled, though Basquiat and Diaz went on to form a collaboration.

In 1978, a new tag appeared on D train subway cars and around Lower Manhattan. SAMO© (pronounced “same-oh”), an abbreviation of Same Old Shit, was a brief but impactful street-art venture between Basquiat and Diaz. The pseudonym, which usually accompanied a line of impassioned political poetry, commanded the attention of contemporaries such as Keith Haring and was intriguing enough to elicit a feature by the alternative newsweekly, The Village Voice.

I tried bringing out the SAMO© with Saturation… it’s pretty clearly visible up close with your eyes. I spoke with the job foreman and they’re deciding whether to keep it or not. #samo #jeanmichelbasquiat #aldiaz #shannondawson #nycgraffiti #nycgraff #graffiti

SAMO© ceased around 1979 after Basquiat and Diaz fell out. Basquiat subsequently wrote “SAMO© IS DEAD” on buildings around Lower Manhattan to mark the demise of their partnership. No known works by the duo survive, though a long-lost tag discovered under layers of graffiti on 350 Lafayette Street (now 11 Bond Street) excited speculation in August 2017. In faded yellow, the all-caps tag appeared to read: “SAMO© … AS AN END TO MIND-WASH RELIGIONS POLITICS AND BOGUS PHILOSOPHY.”

Basquiat’s big break came from a Midtown exhibition in an abandoned building on the corner of 41st Street and Seventh Avenue. The Times Square Show was a group showcase of work by Basquiat, Kenny Scharf, Keith Haring, Nan Goldin and Jenny Holzer. Hailed as “the first radical art show of the ’80s” by The Village Voice, Basquiat’s work was described as “a knockout combination of [Willem] de Kooning and subway spray-paint scribbles” by artist, curator and dealer Jeffrey Deitch.

Basquiat first met Pop art superstar Andy Warhol in 1980 at W.P.A., the now-closed Spring Street restaurant. It was a chance encounter: before Basquiat’s inclusion in The Times Square Show, the high-school dropout was selling postcards of his work when he noticed Warhol dining with the art critic Henry Geldzahler. Basquiat offered Warhol a postcard, which he purchased despite Geldzahler’s immediate dismissal: “Too young.” (Geldzahler would go on to conduct an extensive Q&A with a famous Basquiat for Warhol’s Interview magazine in 1983).

It wasn’t until 1982 that Warhol and Basquiat properly met at Warhol’s studio, better known as the Factory. The two ignited a sincere though mutually beneficial friendship: Warhol gave Basquiat clout and Basquiat kept Warhol relevant. At the time, Basquiat was working with the Italian gallerist Annina Nosei, whose SoHo space hosted a blockbuster solo exhibition of Basquiat’s work. The artist claimed 1982 was his most creative year. 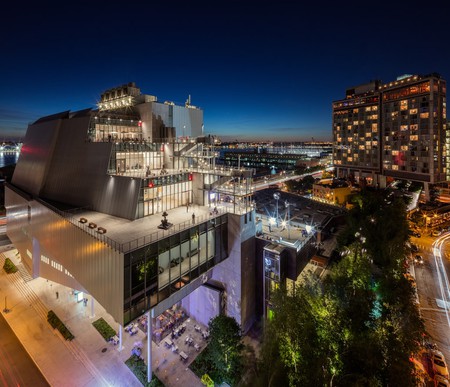 The new Whitney Museum of American Art, located in the Meatpacking District since 2015 | © Ben Gancsos

In 1983, Basquiat was invited to exhibit at the Whitney Biennial – a prestigious showcase of contemporary art organized by the Whitney Museum of American Art since 1932 – among a roster of works by major artists including Louise Bourgeois, Jasper Johns, Cindy Sherman and Joan Mitchell. Only 22 years old at the time, Basquiat became “the youngest artist to have represented America in a major international exhibition of contemporary art,” according to Christie’s.

From 1983 until his death, Basquiat lived and worked in NoHo at 57 Great Jones Street, an East Village loft technically owned by Warhol. By 1983, Basquiat was one of the industry’s most sought-after artists; but come the mid-’80s, his drug addiction was severe. Nosei consequently cut ties with the artist who, by then, relied heavily on Warhol to intercept his using. When Warhol died in 1987, Basquiat’s principle crutch was gone. He died of a drug overdose at the age of 27 on August 12 1988. 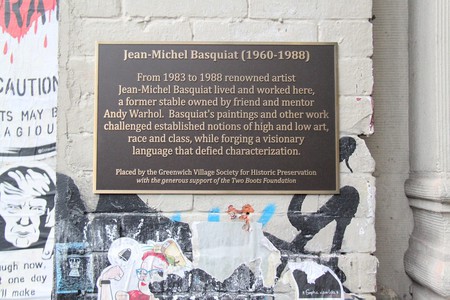 In July 2016, the Greenwich Village Society for Historic Preservation installed a permanent plaque on the building honoring Basquiat’s legacy as one of New York City’s most revolutionary artists.

In May 2017, Basquiat’s Untitled (1982) was sold to Japanese entrepreneur Yusaku Maezawa. At $110.5 million (£85.3 million), it was the most expensive American artwork ever sold at auction. 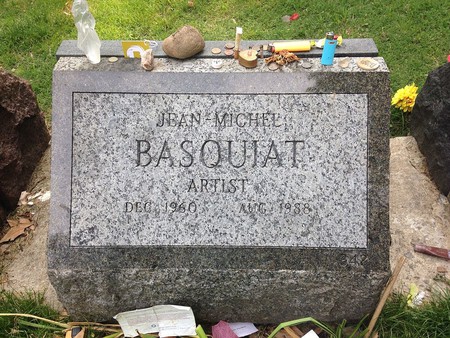 Jean-Michel Basquiat is buried in Green-Wood Cemetery, a National Historic Landmark in the Greenwood Heights neighborhood of Brooklyn. His humble grave marker, located in section 176 of the cemetery, is identifiable by the paintbrushes, rocks and pocket change regularly left by admirers.

Green-Wood is the site of burial for several cultural figures associated with New York City, including the esteemed composer and conductor Leonard Bernstein and the Art Nouveau artist and designer, Louis Comfort Tiffany of Tiffany & Co.