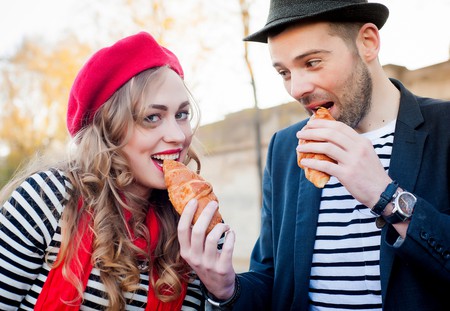 Am I in New York or Paris?

After an afternoon of champagne, delicate pastries and the irresistible smell of fresh baguettes; it’s easy to convince myself I’m just a few blocks from the Seine rather than the Hudson River. As I write this, I’m sitting in the backyard garden of the Dominique Ansel Bakery in New York’s Soho. The silhouette of the Eiffel Tower is painted on the wall, the subtle chirps of birds mingle with the idle chatter of nearby guests; each table adorned with pastries too beautiful to eat.

My entire afternoon has played out like a scene from Midnight in Paris as I’ve wandered from bakery to pastry shop, bistro to hidden garden all in the name of finding the best French-inspired places in New York City. 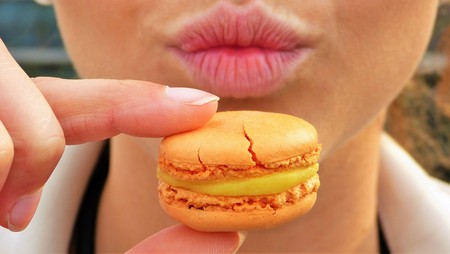 If it weren’t for the passing yellow cabs, I could close my eyes, put a macaron to my lips and transport myself across the Atlantic Ocean. For fellow francophiles, here’s how to transport yourself to Paris without leaving New York.

For the francophiles whose love of Paris can’t be satisfied with a macaron, then consider visiting the French Institute Alliance Francaise or FIAF. Located on the Upper East Side, FIAF is a not-for-profit organization that is a hub of French culture in the heart of New York. FIAF hosts French wine tastings, film screenings and offers French language classes. 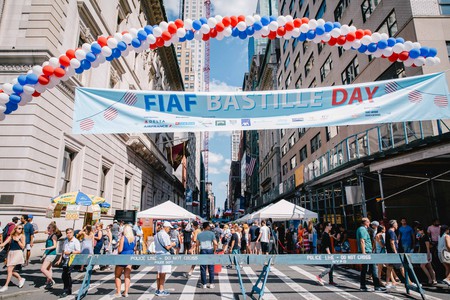 Additionally, for the past 20 years FIAF has hosted the annual Bastille Day festival. The festival is hailed as “New York’s largest public celebration of France’s Independence Day (July 14, 1789) and its historic friendship with the United States,” according to the site.

Attendees will find themselves swept up into a fête of champagne, pastries and French music. While the Bastille Day Festival—which takes place on 60th and Lexington Avenue—is open to the public, there are ticketed tasting events that offer guests a chance to indulge in some of the finest French cuisine, wine and champagne around. 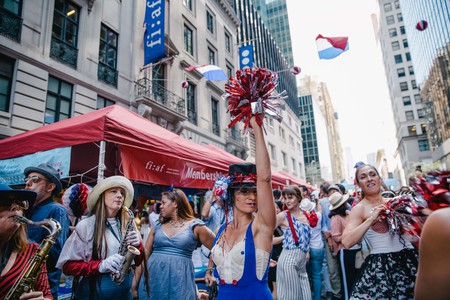 Once the haunt of literary icons, Earnest Hemingway and F. Scott Fitzgerald, Shakespeare & Co. is a relic of 1920s Paris. In New York, we have our very own Shakespeare & Co. in Midtown East. While our Shakespeare & Co. doesn’t come with a romantic view of neighboring Notre Dame, it is a great place to come and read about the Paris of decades past.

Carrie Bradshaw of Sex and the City, famously said in an episode: “one of the most amazing things about living in a city like New York is that any night of the week you can go to Paris.” Of course, Bradshaw was referring to the iconic Paris Theater near Columbus Circle.

The Paris Theater first opened its doors in 1948 and has since been showing foreign films, specializing in—you guessed it—French cinema. Located across the street from the iconic and historic Plaza Hotel, the Paris Theater is the only one-screen cinema theater left.

There are plenty of French-inspired cafes found outside Manhattan. In Long Island City (right over the East River) is the charming Cafe Henri. Cafe Henri specializes in crepes and other classic French dishes; but what truly makes this local gem worth a visit is the spot-on Parisian ambiance it offers. 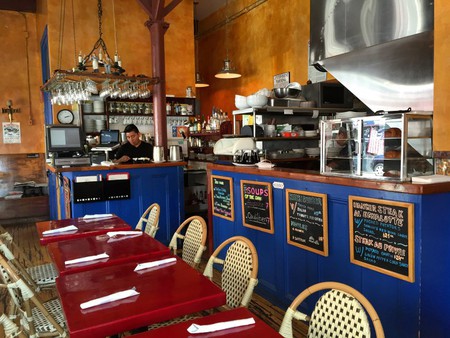 Cheery blue walls and Parisian decor make Cafe Henri feel as though it has been plucked from the streets of Montmarte.

As soon as the door swings open, Laduréeushers guests into a world of rose petals, pastel colors and delectable pastries. Ladurée is Paris personified; it is the sort of experience one looks for when wandering the streets of France. With its array of expertly-crafted macarons, everything in Ladurée is simply too beautiful not to photograph.

The history of Ladurée extends back to the 1800s when Louis Ernest Ladurée opened a bakery in Paris at 16 Rue Royale. The surrounding area (present day Madeleine) was beginning to flourish as construction on the Garnier Opera House began and luxury French shops moved in. 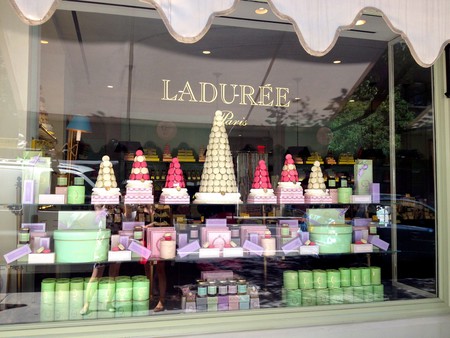 After a fire in 1871 at the original Ladurée bakery, the shop transformed itself into a newly renovated pastry shop complete with hand-painted ceilings inspired by the Sistine Chapel, according to the website.

Today, Ladurée can be found in 27 countries including two locations in New York–one on Madison Avenue and one in Soho. The Madison Avenue location is a standing room only pastry shop but the Soho location is a full fledge restaurant with an enchanting garden in the back reminiscent of Paris.

Mille-Feuille is an authentic, Parisian bakery that specializes in macarons. Unlike its glamorous competitor, Ladurée, Mille-Feuille is a budget-friendly alternative that won’t burn a hole in your wallet. Mille-Feuille is a family-owned business founded by Parisian ex-pats, Olivier and his wife Nathalie. Founded in 2011, Mille-Feuille had a meteoric rise to success that allowed it to open a second location in the city and move their kitchen to a larger space in Brooklyn.

For a classic Parisian meal, look no further than Balthazar Bistro & Bakery in Soho. Balthazar opened back in 1997 and has since become an institution in NYC ever since. Known for its typical French fare, Balthazar is the go-to place when looking to channel your inner Parisian. 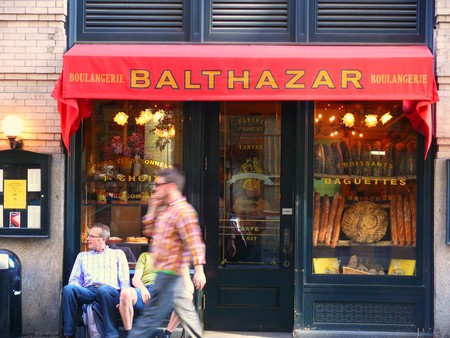 With its mirrored walls, low lighting, red leather banquettes and classic cocktails; to walk into Balthazar is to be transported to Paris circa 1920.

France is everywhere in New York City—from the French fashion that dots 5th Avenue to the quaint pastry shops found tucked away in Soho—you don’t have to search far to transport yourself to the cobblestone streets of France.
*Portions of this story originally appeared on the author’s personal blog, The Pin the Map Project.