From its reputation as a melting pot within a melting pot to its status as one of the world’s foremost financial and cultural centers, New York City has no shortage of stories to tell, and filmmakers have paid homage to it since the invention of film itself. This comprehensive guide profiles both on- and off-the-beaten-path locations essential for film buffs who want to relive some of the Big Apple’s quintessential movie moments.
Arthur Avenue Italian Culture © Tony Fischer/Flickr

Museum
Dinosaur at the American Museum of Natural History | © Don DeBold/Flickr
Begin your tour of New York’s movie magic in the city’s northernmost borough. The Bronx’s Arthur Avenue dubs itself ‘The Real Little Italy,’ and from the mouth-watering aroma of New York pizza to the long lines for fresh pasta, it’s not hard to understand why. Arthur Avenue is the setting of the 1950 Oscar-winning film Marty, in which the titular character (Ernest Borgnine) works as a lonely butcher, longing for the affection of a local teacher (Betsy Blair) while dodging the criticism of his dysfunctional Italian-American family. For mob movie connoisseurs, Arthur Avenue and the surrounding Belmont area is the setting of 1993’s A Bronx Tale, featuring the neighborhood’s own Chaz Palmentieri and Robert De Niro (making his directorial debut).
More Info
Open In Google Maps
New York City, New York, USA
View menu
Visit website
Visit Facebook page
Send an Email
Give us feedback

Natural History Museum, Park
Milstein Hall of Ocean Life | © Image courtesy of American Museum of Natural History
Book Now
Make your way to Manhattan’s Upper West Side for a visit to one of largest and most expansive museum collections in not only New York City, but the entire world. With an area of 2,000,000 square feet, the American Museum of Natural History boasts an impressive collection of minerals, meteorites, and, of course, dinosaur fossils. Parents and children alike will marvel at the iconic Tyrannosaurus rex as seen in Night at the Museum(2006). And no trip to AMNH would be complete without a visit to the Theodore Roosevelt sculpture, as made famous by Robin William’s uncanny portrayal of America’s 26th president and pioneering naturalist (no word on whether or not the mannequins actually come to life at night, however).
More Info
Open In Google Maps
200 Central Park West, Manhattan New York, New York, 10024, USA
+12127695100
View menu
Visit website
Visit Facebook page
Send an Email
Give us feedback

Park
Central Park, New York City. | © Alan SCHEIN / Alamy Stock Photo
Book Now
In need of some fresh air? Look no further than Central Park — the most visited urban park in the USA. Covering 843 acres, Manhattan’s biggest playground provides year-round recreation for people of all ages and interests, so it’s no wonder that it is one of the most frequently filmed locations in the world. Children will recognize the sprawling landscape from Disney’s Enchanted (2007), in which the bubbly princess-to-be Giselle (Amy Adams) inspires a spontaneous sing along in front of the picturesque Bethesda Fountain. And while many lions, zebras, and giraffes call the Bronx home, visitors of the Central Park Zoo can get up close and personal with the penguins that inspired the mischievous escape in the DreamWorks 2005 animated film, Madagascar.
More Info
Open In Google Maps
Manhattan New York, New York, USA
+12123106600
View menu
Visit website
Visit Facebook page
Send an Email
Give us feedback

‘Greed, for lack of a better word, is good.’ While we can’t promise that you’ll be able to live like Wall Street’s Gordon Gekko (Michael Douglas), at Midtown’s famous 21 Club, you can certainly party like it’s 1987. For over 80 years, the 21 Club has been the premier restaurant for actors, athletes, and even bootleggers. Patrons of the 21 Club delight in the venue’s sophisticated décor, ornamental jockeys, and famous (or perhaps infamous) wine cellar, which was used to hide its stash of illegal liquor during the Prohibition Era. 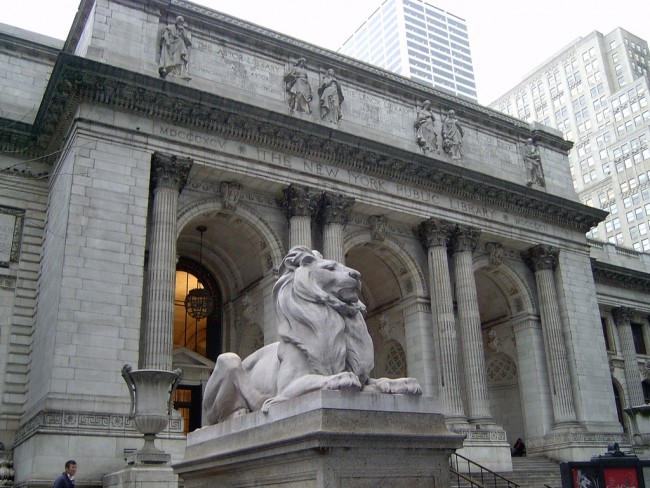 Building, Library
Who doesn’t love a good ghost story? Better yet, who doesn’t love a good ghost movie? Whether or not you’re a believer in the paranormal, the New York Public Library is the place to be if you want to relive the 1984 comedy classic Ghostbusters, in which our misfit protagonists investigate the alleged haunting of the main reading room by deceased librarian, Eleanor Twitty. Though, of course, there are some who speculate there might be more to the library’s supernatural history than just the magic of Hollywood…
Permanently closed
More Info
Open In Google Maps
476 5th Avenue, Manhattan New York, New York, 10018, USA
+19172756975
View menu
Visit website
Visit Facebook page
Send an Email
Give us feedback

Cinema, Train Station, Building
Grand Central Station teems with commuters at rush hour | © Maciej Dakowicz / Alamy Stock Photo
Book Now
Some call it ‘Terminal,’ some call it ‘Station,’ but whatever you call it, chances are you’ve probably been in Grand Central at some point. One of the two largest railroad terminals in New York City, Grand Central’s intricately designed main concourse makes it a much more fitting background for the big screen than its sister terminal, Penn Station. Fans of classic Hollywood cinema will recognize the station from Alfred Hitchcock’s North by Northwest (1959)which features Cary Grant on the run as a victim of mistaken identity. Perhaps inspired by Hitchcock’s masterpiece, Grand Central has gone on to serve as the setting for many thrillers, including the 1993 crime drama Carlito’s Way and even the 2012 superhero blockbuster The Avengers (2012).
More Info
Open In Google Maps
89 East 42nd Street, Manhattan New York, New York, 10017, USA
+12123402583
View menu
Visit website
Visit Facebook page
Send an Email
Give us feedback

Deli, Restaurant, Sandwich Shop, American, $$$
Xiao Long Bao | © Charles Haynes/Flickr
Book Now
It’s common knowledge that New York does delis better than any other city, so why not head to Manhattan’s Lower East Side for lunch at one of the very best? Since 1888, New Yorkers have been coming to the corner of Ludlow and Houston in droves for Katz’s Delicatessen’s classic Jewish deli favorites. It was Rob Reiner’s 1989 romantic comedy When Harry Met Sally that truly projected Katz’s into the national spotlight. While you may not have quite the same reaction to your meal as Meg Ryan, chances are the mouthwatering corned beef and pastrami sandwiches will have you coming back for more.
More Info
Open In Google Maps
205 East Houston Street, Manhattan New York, New York, 10002, USA
+12122542246
View menu
Visit website
Visit Facebook page
Send an Email
Give us feedback

Bridge, Cinema, Park
THE CYCLONE ROLLER COASTER - CONEY ISLAND, BROOKLYN, NY August 6, 2010 | © Ron Cogswell/Flickr
Staten Island has gained the notorious reputation of being NYC’s ‘forgotten borough,’ but that doesn’t mean it hasn’t made its mark in the annals of New York cinema history. The Verrazano-Narrows Bridge, which has connected Brooklyn and Staten Island for over fifty years, has been used for establishing shots in countless films, from Woody Allen’s iconic Annie Hall (1977) to Darren Aronofsky’s chilling Requiem for a Dream (2000). However, no film has utilized the bridge more than John Badham’s disco classic, Saturday Night Fever (1977). For the struggling Tony Manero (John Travolta), the Verrazano Bridge serves as more than just a place to hang out with friends on his way to his nightly gig as ‘the king of the dance floor.’ It represents an escape from his stagnant life in Bay Ridge, Brooklyn, to a better life in the suburbs. For a chance to truly take a walk in our protagonist’s shoes, visit the bench below the bridge, located in Shore Road Park, Brooklyn.
More Info
Open In Google Maps
Verrazzano-Narrows Bridge, Staten Island New York, USA
+12123603000
View menu
Visit website
Visit Facebook page
Send an Email
Give us feedback

Park
Brooklyn’s world-famous seaside town prides itself on embracing all things wicked and weird about American pop culture. After all, where else would you be able to attend an annual Mermaid Parade, see an old-fashioned freak show, and ride a 90-year-old roller coaster in one day? Although much of The Warriors (1979) takes place on the mean streets of the Bronx and Manhattan, the culminating scene of Walter Hill’s controversial fantasy thriller transpires on the windy beaches of Coney Island. With Deno’s Wonder Wheel and the Cyclone looming in the background, watch as the eponymous young band of gangsters face off against the villainous Rogues once and for all. Can you dig it?.
More Info
Open In Google Maps
New York City, New York, USA
View menu
Visit website
Visit Facebook page
Send an Email
Give us feedback

Bar, Pub Grub
End your journey with some libations from the self-proclaimed ‘Most Famous Bar You’ve Never Heard Of.’ Opened in 1829 in Woodhaven, Neir’s Tavern holds the title of being one of the oldest drinking establishments in the five boroughs and has been serving burgers and beer for celebrities since the days of Old Hollywood. Not only is this Queen’s staple rumored to have birthed the career of silver screen siren Mae West, but it also gets some serious screen time in a pivotal moment of Martin Scorsese’s Goodfellas (1990). While our gang of ‘wise guys’ brag over the success of the legendary 1978 Lufthansa Heist at JFK Airport, ‘Jimmy the Gent’ Conway (Robert De Niro) sits alone at the bar and has a grim epiphany about must be done to silence his bigmouth associates. Perhaps inspired by Scorsese’s mob hit, Neir’s Tavern was used to chronicle another financial caper in Brett Ratner’s 2011 comedy Tower Heist.
More Info
Open In Google Maps
87-48 78th Street, Woodhaven, Queens New York, 11421, USA
+17182960600
View menu
Visit website
Visit Facebook page
Send an Email
Give us feedback
Book with our partner and we will earn a small commission.
Give us feedback