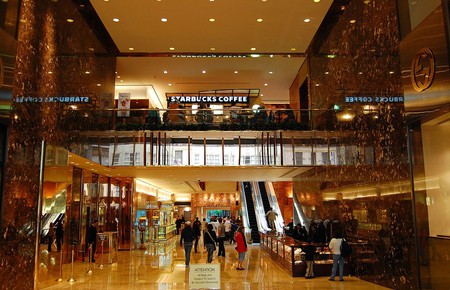 Over the past year, no New York City building has changed as much as the Trump Tower. The imposing Fifth Avenue building went from being a building full of shops, offices and condominiums to a skyscraper housing the President, First Lady and their family. Here’s a look back at the history of Trump Tower – from the moment it opened until the moment it became White House North.

Trump Tower is built on the foundation of the former Bonwit Teller flagship store. It was an Art Deco building, built in 1929, that was renowned in the architecture world for its…but more on that later. 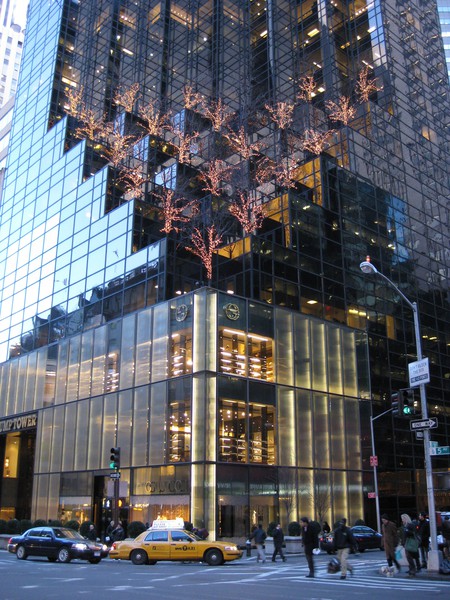 There is some controversy over how many floors there actually are in the Trump Tower. When the building began construction in 1979, it was supposed to cost $100 million and house 60 stories. It opened with 58. However, the highest floor of Trump Tower is marked as floor number 68 because, according to not-yet-President Donald Trump, the five-story public atrium is actually the height of 10 ordinary stories. Not everybody else agrees. A story in Bloomberg pointed out that the ceilings on each floor are actually much taller than those in similar corporate buildings. Nevertheless, when numbering the floors, building officials skipped floors six through thirteen. Visitors jet straight from floor five to floor 14.

Before Trump Tower even opened in 1983, it was already embroiled in controversy. Within the former Bonwit Teller building, there were two limestone bas-relief sculptures of goddesses and a massive iron grille, indicative of the Art Deco style. When Trump made an agreement with the New York Committee for a Balanced Building Boom, he promised that his staff would remove the sculptures and the grille from the building and donate them to the Metropolitan Museum of Art (the Met valued the sculptures at $200,000 at the time).

However, when it came time to remove the sculptures, Trump decided instead to destroy them. He said that removing the sculptures would set construction back 10 days and would become too costly of a project. Architectural conservationists were appalled.

“Evidently, New York needs to make salvation of this kind of landmark mandatory and stop expecting that its developers will be good citizens and good sports,” the New York Times said at the time.

By 2004, the building became world-famous when Trump shot scenes of The Apprentice inside the building. Over its history, the building has been home to famous tenants including Johnny Carson, David Merrick, Sophia Loren and Steven Spielberg

When Trump announced his candidacy for President of the United States, he did so from this building (and, yes, the famous video of Trump riding the escalator down slowly was taken here). Throughout the election season, then-candidate Trump also used the Fifth Avenue building as his headquarters. He would often deliver speeches, take meetings, or tweet his famous posts from this tower. 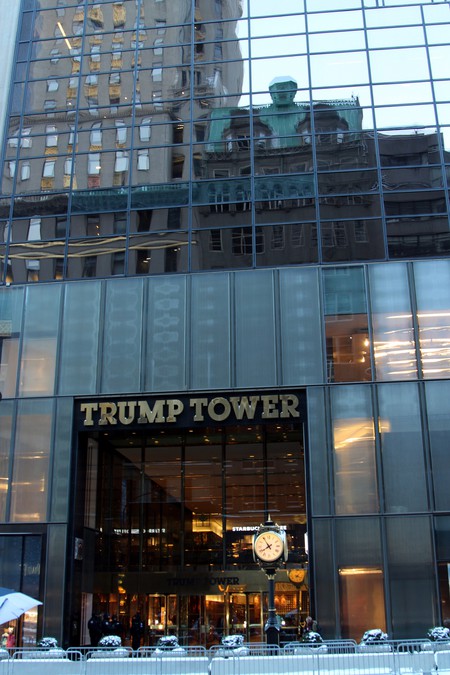 After winning the election, Trump stayed at Trump Tower. He remained largely hidden from public view, but politicians and celebrities were photographed coming to and leaving the tower for meetings.

In March of this year, Trump accused Obama of trying to wire-tap his tower in the months leading up to the election, although no evidence for this claim has yet been found.

Since the election, the tower has undergone a bit of renovation. First Lady Melania Trump will remain in the Midtown tower at least through the end of the school year with her son Baron. A report by CNN states that it costs New York taxpayers $1 million every day to keep the First Lady at Trump Tower instead of the White House – although the cost will be reimbursed by the federal government.