A Botanical ‘City Within A City’ Returns To Dazzle New York 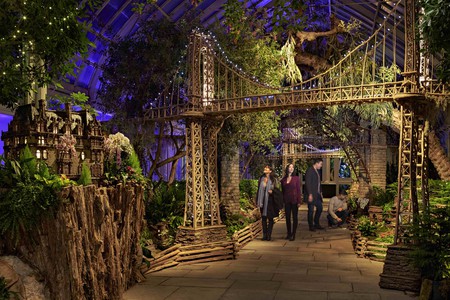 Each year the New York Botanical Garden presents a two-month-long holiday spectacle that features miniature replicas of New York City’s most famous buildings and structures – all meticulously hand-crafted from plant materials. While miniature trains circle through the whimsical landscape, visitors can gaze in wonder at the architectural intricacies of the mini-structures and rediscover a new love for New York. 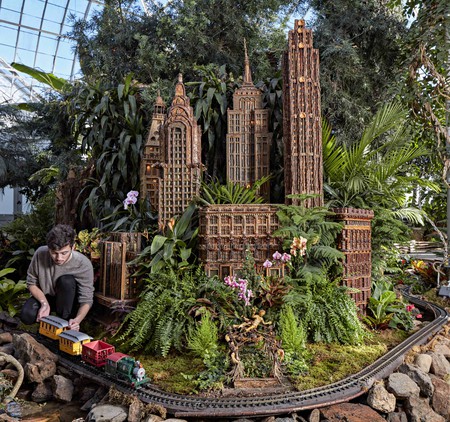 The Holiday Train Show began nearly 25 years ago when the fantastical architectural work of Paul Busse was discovered by a NYBG staff member. His company, Applied Imagination, constructs the entire show in Kentucky, and spends ten days in November setting it up New York. Thirty staff members build and install the show in the Haupt Conservatory, which includes 25 trains, a 30-foot replica of the Brooklyn Bridge, and 150 landmarks and structures.

Paul Busse and his team exhibit an astonishing attention to detail in their designs, most of which are realized with natural, plant-based materials, including twigs, seeds, moss, and leaves. The train tracks weave around the natural foliage of the gardens and the magical landscape is filled with ferns, orchids, moss, succulents, ponds, and waterfalls. A key raw material used by the botanical artists is eucalyptus seed pods, which are collected each year in the Haupt Conservatory, but other materials for structures include acorn wings, magnolia buds, dark shelf fungus, seagrass, and honeysuckle branch.

“The great thing about the holiday show is that it’s different every year,” Todd Forrest, the VP for Horticulture and Living Collections at The New York Botanical Garden, tells Culture Trip. “What’s amazing is how Applied Imagination ‘reimagines’ the space each year and how a building I may have not noticed (because it’s in a new location) looks brand new. The Brooklyn Bridge, for instance, is in an entirely new location this year. In the Palm Dome, the most luxurious space in the garden, the bridge becomes solid and ethereal. It clearly feels like the stone bridge we know, but it’s made of bark,” he says.

Along with four other bridges, the architectural wonders of the show include the 42nd Public Library, John D. Rockefeller’s forty-room villa Kykuit, Grand Central Station, Saint Patrick’s Cathedral, and more – all painstakingly crafted over several months from raw materials. The miniature replica of the Haupt Conservatory, made from lotus seedpods, cinnamon bark, cones from sugar pine trees, among other plant species, took ten botanical artists nearly five months to construct.

The show mixes nostalgia with nature, architectural complexity with fantasy, and American culture with universal wonderment. “There is a magic in seeing a model come together from the most minute found materials, ending as a finished structure with windows glowing with amber light, surrounded by a lush scaled landscape. Watching a train chug by for the first time only adds to the spell,” pens Cindy Johnson in the new book The Holiday Train Show. 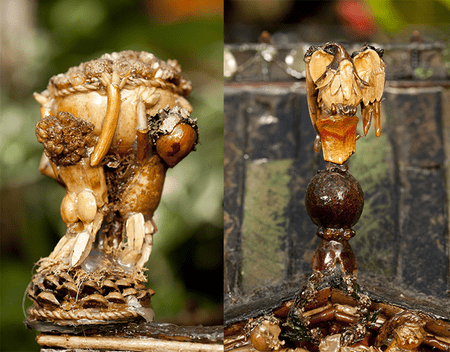 The show forces the viewer to notice the architectural details all around New York; details somehow ‘register’ when crafted from natural materials. “Holiday train structures both invite and bare scrutiny. As you get closer to the structures, you start to resolve those individual bits, like pine cones scales or grapevine tendrils. But when you step back, you see them collectively as beautiful renderings of historical buildings,” Todd Forrest tells Culture Trip.

“New Yorkers are famous for being head down and fully engaged in their business – many are not paying attention to all the details of their architectural surroundings. The train show encourages you to gaze closely upon these amazing buildings, to slow down and take a second look,” he adds. “And every year we hope that it reignites that love affair with New York.” 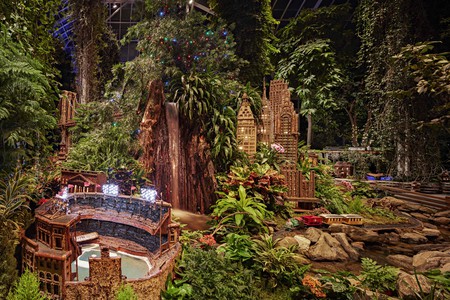