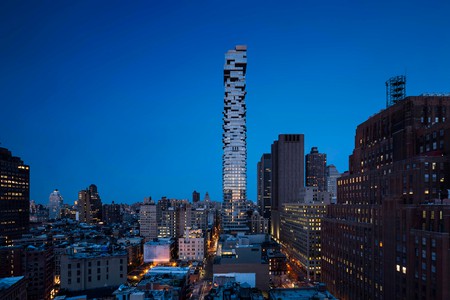 New York City is filled with award-winning skyscrapers and hidden historical gems. Here are a few of the structures you’ll appreciate best from the water.

For a sweeping tour of New York City’s architecture – minus the crowded streets, subway stops, and neck craning – check out the Around Manhattan Architecture Tour with Classic Harbor Line. Now in its ninth season, the summer boat tour brings architectural sightseeing to the next level with insight into NYC’s ever-evolving skyline from an American Institute of Architects (AIA) New York Chapter tour guide, and a little touch of luxury. Here are our favorite highlights from the tour.

Designed by a team led by Pritzker Prize-winning architect Norman Foster, 100 East 53rd Street’s slender form features a spectacular pleated-glass curtain wall that can be appreciated from virtually any point on the East River. Towering over the Manhattan skyline at 63 stories, the luxury residential building was designed to complement Mies van der Rohe’s neighboring Seagram Building, which opened in 1958. Foster + Partners’ luxury tower was completed in 2017. 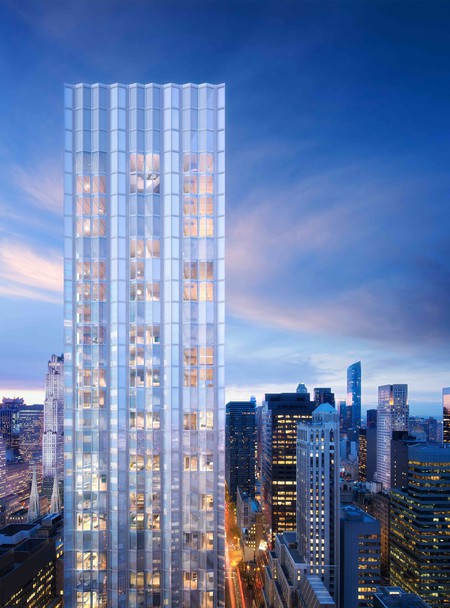 Designed by the Danish architecture firm Bjarke Ingels Group (BIG), VIA 57 West is an award-winning “residential superblock” located in Midtown. The residential building, which is known for its sustainable standards, features a 22,000sq ft garden inside the cutout of its unusual tetrahedron shape. Its atypical form and dramatic luxury have been intriguing additions to the skyline since 2016.

“While some have understandably dubbed this building the Pyramid or the Sail, the engineers actually quibbled over whether it was a trapezoid or a hyperbolic parabola,” says Joe Lengeling, an AIA tour guide. “Meanwhile, the architect, Bjarke Ingels, just saw through all of that and declared it to be a ‘courtscraper’ – a marriage between a courtyard building from Europe and a New York skyscraper.” 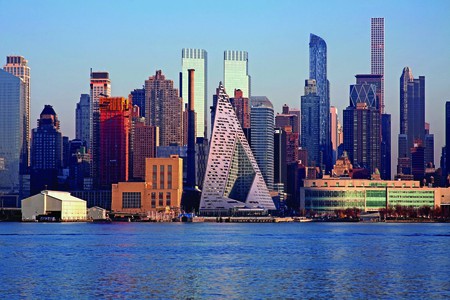 VIA 57 West | © Richard Berenholtz, Courtesy of The Durst Organization

At the onset of the Classic Harbor Line tour, one of the first buildings you’ll encounter is Frank Gehry’s IAC Building. Its curvaceous, tiered form is best appreciated from afar, particularly the undulating glass curtain wall. IAC’s exterior contains around 1,437 glass panels, the majority of which are cold-warped and bent so that each panel is unique. The supporting columns of the structure are also twisted, giving the building its signature shape.

“While the architect, Frank Gehry, and the owner, Barry Diller, conjured up images of sails out on the Hudson River, many observers quip that this translucent white building resembles an iceberg,” Lengeling says. “A difficult irony given that in 1912 the Titanic was originally scheduled to arrive just in front of the building at Chelsea Piers.” 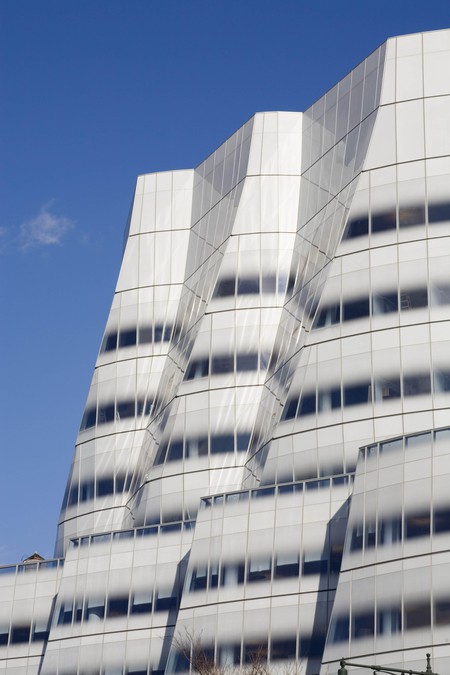 Also known as the Little Red Lighthouse, Jeffrey’s Hook Light is situated directly under the George Washington Bridge on the Hudson River. Because it’s difficult to see from land (especially if you’re not looking for it), the compact lighthouse is best seen by boat. First constructed in 1889 and subsequently made famous in Hildegarde Swift’s 1942 children’s book The Little Red Lighthouse and the Great Gray Bridge, Jeffrey’s Hook Light is now an NYC landmark. 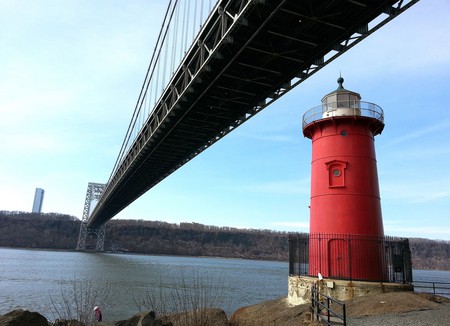 “Along the waterfront, New Yorkers seem to cherish the signage of our industrial past,” says Lengeling. “Witness the Colgate clock on the tip of Jersey City, the ‘Long Island, Long Island’ gantries, and of course the giant Pepsi-Cola sign at Long Island City. The big yellow Domino Sugars sign is being restored now and is scheduled to join this outdoor art gallery soon as the Domino Sugar site development emerges.”

The site also has a new 6-acre, waterfront public park designed by James Corner Field Operations, which just opened this summer. The park features salvaged industrial artefacts from the original Domino Sugar Factory and includes a 1,200ft esplanade, an elevated walkway, a taco restaurant and more. The park is open Monday to Sunday from 6am to 1am. 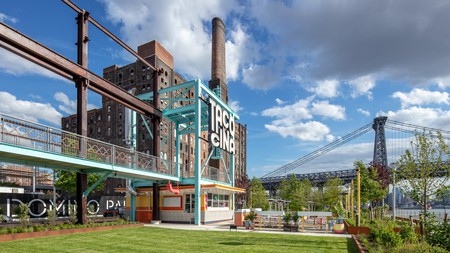 Opened at the turn of the 20th century, the Spuyten Duyvil Bridge is a lesser-known railroad swing bridge located between the Bronx and Harlem. It’s currently under reconstruction after incurring damage from Hurricane Sandy, but should be back in action by September 2018, carrying Amtrak trains between boroughs and upstate. 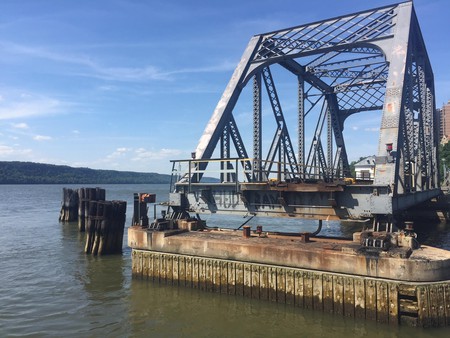 This 60-story glass tower, designed by Herzog & de Meuron, has dominated the skyline since 2016. 56 Leonard was conceived as a stack of individual houses, with each floor utilized as a private residence. The staggered yet cohesive design resembles a giant Jenga game in the sky with its series of shifting cantilevers.

“56 Leonard Street sounds like just another address until you experience this residential building from the vantage point of the water,”says Lengeling. “Almost everyone on the tours guesses the building’s moniker right away: the Jenga Building.”

This LEED-certified, 21-story high-rise—designed by Jean Nouvel—features a glass curtain wall containing more than 1,650 window panes, each of which is tilted at a different angle to produce a shimmering effect. Located in West Chelsea, 100 11th Avenue offers an eclectic mix of “grit and glamour” that offset the “soft, sail-like curves” of the neighboring IAC Building. 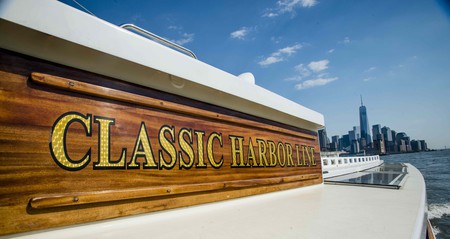 For more on Classic Harbor Line’s architectural tours, check out this article.