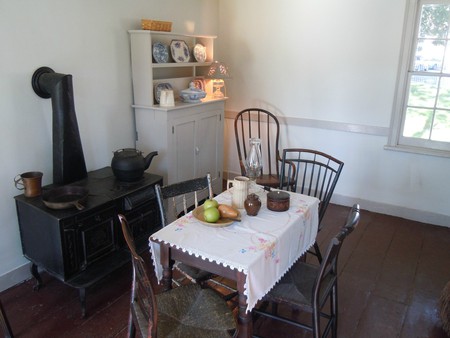 The streets, mountains, and rivers of New York State and New York City have inspired the words of countless writers, and with stunning scenery alongside a rich urban culture, it’s no wonder so many literary icons have called New York home. Thanks to the reputation of their work, some writers have had their homes preserved, which are now open for visitors for a peek into their owners’ everyday lives. We profile seven writers’ homes that you can visit across New York. 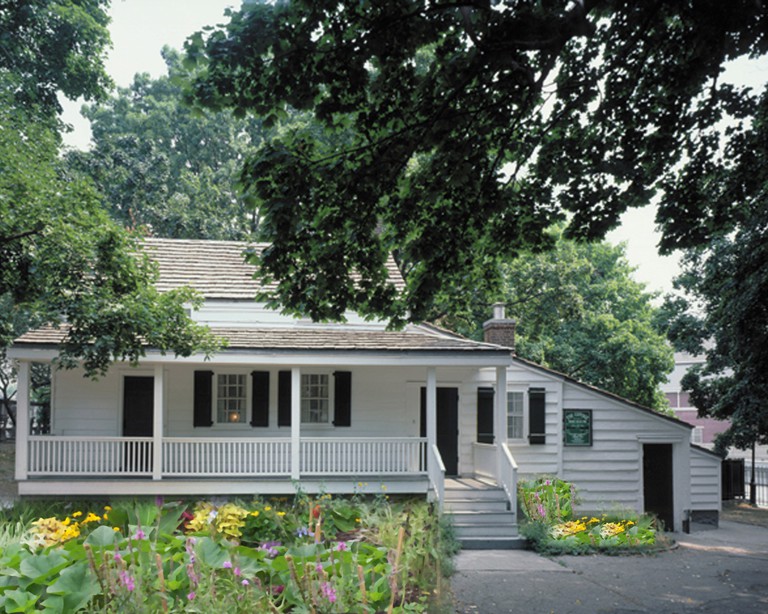 Edgar Allan Poe Cottage | Courtesy of The Bronx County Historical Society
Edgar Allan Poe inhabited many New York City addresses throughout the mid-19th century, integrating himself into the literary society of the time. A plaque commemorating one of Poe’s residences can be found at 85 West Third Street (now part of New York University), but to really see how Poe lived, you’ll have to venture north of Manhattan. After Poe’s young wife, Virginia, fell ill with tuberculosis, the couple moved away from the grind of the city to the fresh country air of Fordham Village, an area now known as the Bronx. In 1846, Poe would have been able to see clear to Long Island from the small wooden farmhouse, now called Poe Cottage, where he wrote such famous poems as ‘Annabel Lee’, and ‘The Bells’. Since 1874 admirers of Poe’s work have been visiting the cottage, though it wasn’t a museum until 1913 when it was moved from its original location into Poe Park. Today, the Bronx County Historical Society operates the property and offers educational tours and special programs for school groups and the public. 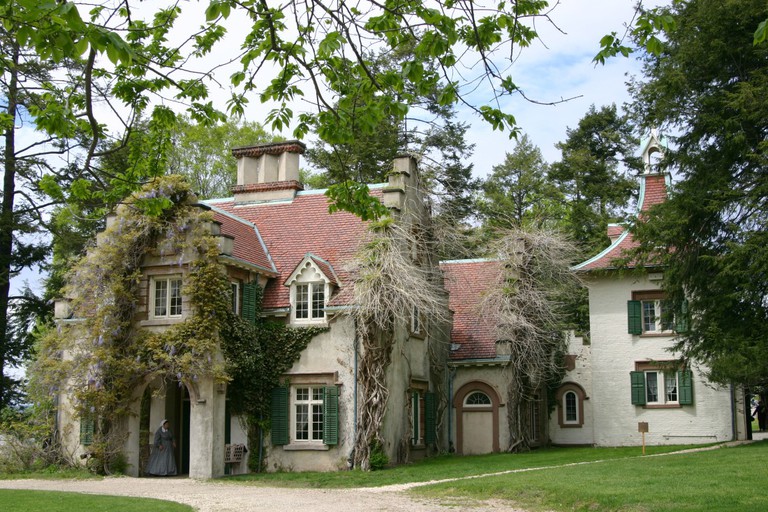 Sunnyside | © Karen M. Sharman
A walk around the grounds and through the house at Washington Irving’s Sunnyside feels like a walk through a fairytale. The storybook house reveals itself as you round a tree-lined path. Sunnyside, which The Legend of Sleepy Hollow author affectionately referred to as his ‘snuggery’, has many interesting architectural features. The exterior of the home, which is covered in exotic wisteria, boasts styles inspired by Spanish, Scottish, and Dutch architecture. Inside, there are window seat nooks that look out to the Hudson River and furnishings and items that sit in the same spot Irving left them. The nature surrounding the property was designed by Irving to reflect his romantic views. Visitors to Sunnyside can enjoy an informative tour led by a costumed guide and then ramble about the grounds for as long as they please and take in the spectacular views of the Hudson River. 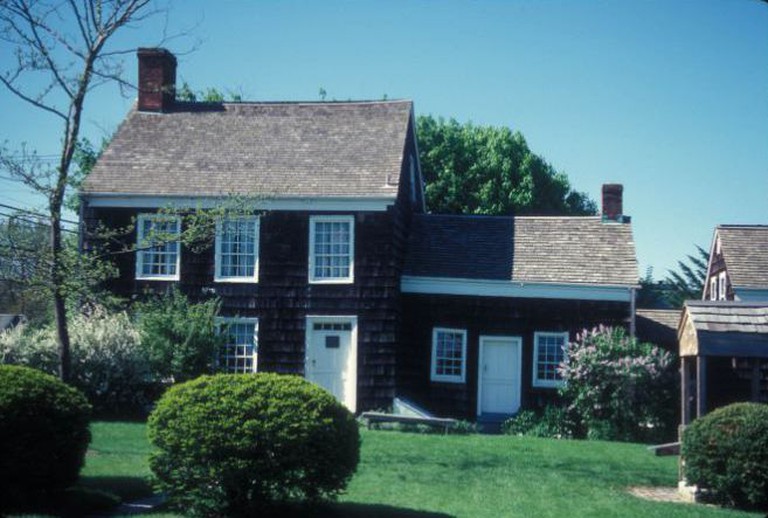 WALT WHITMAN HOUSE | © JERRYE & ROY KLOTZ MD/WikiCommons
Though Walt Whitman spent the later part of his life outside of New York, the American poet and journalist spent his formative years and his career on Long Island. In 1819, Whitman was born into a large rural family in a small farmhouse in West Hills, an area where his family had lived for over 125 years. In 1951, The Walt Whitman Birthplace was acquired by the Walt Whitman Birthplace Association (WWBA) – a group of poets, authors, professors, business people, and concerned citizens dedicated to preserving Whitman’s history. After extensive research and meticulous care, the birthplace has been restored to appear as it would have when the Whitmans lived there in the early 19th century. The WWBA offers many special programs for school children and the public including tours, reenactments, and other special events such as poetry readings and classes. Every year, the WWBA host a celebration for Walt Whitman’s birthday, and award winners of their annual student poetry contest. 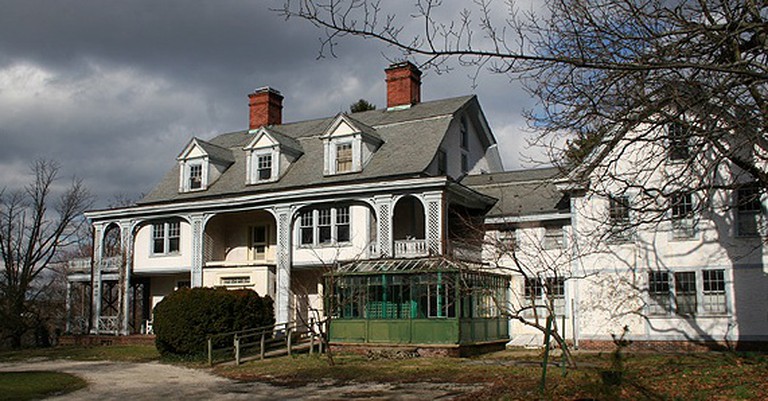 Cedarmere - Home of WC Bryant | © Ryssby/WikiCommons
Massachusetts transplant and poet William Cullen Bryant occupied this country estate from 1843 until his death in 1878. Bryant was a writer and editor at the NY Evening Post, and penned many poems such as ‘Thanatopsis’ and ‘To a Waterfowl’. Starting with a two-and-a-half story clapboard structure, Bryant renovated and expanded the home to three and a half stories with an extensive kitchen wing and dubbed it ‘Cedarmere‘ after the cedar trees that lined the pond. As a horticulturist and champion of land conservation, Bryant took great pride in the landscaping of his property and designed the gardens himself. This Roslyn home remained in the Bryant family until it was handed over to Nassau County in 1975. Today, visitors can explore the seven-acre property’s gardens and take a guided tour of the main house. The Friends of Cedarmere, a non-profit that maintains the gardens, offer performances, workshops, special exhibits, research programs, lectures, tours and other special events at the property. 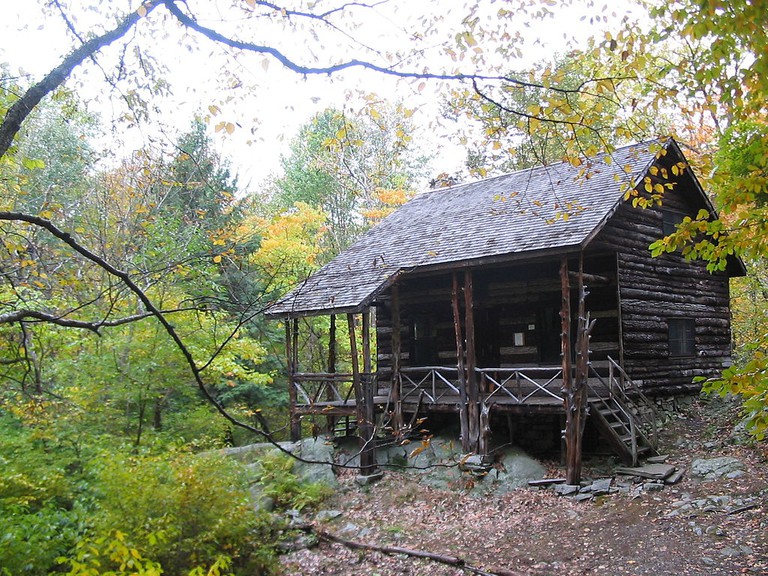 Slabsides | © WikiCommons
Nestled within the 200-acre John Burroughs Nature Sanctuary just west of the Hudson River, Slabsides served as a quiet retreat for the literary naturalist, John Burroughs. Burroughs constructed much of the two-story cabin himself, using bark-covered slabs from surrounding trees, in 1895. It was in this rustic West Park retreat that Burroughs wrote about the rugged and enchanting nature surrounding him and entertained the likes of President Theodore Roosevelt, conservationist John Muir, and automaker Henry Ford. Slabsides is now maintained and operated by The John Burroughs Association, an organization dedicated to preserving the ‘legacy, writing, and natural world of John Burroughs… by encouraging nature writing and enriching lives through nature’. In addition to preserving the cabin and surrounding sanctuary, the association provides annual literary awards, offers educational programs, and hosts special events. Guests are encouraged to visit Slabsides and to hike the four and a half miles of trails that wind through rocky ridges, waterfalls, wildflowers, and other natural features that Burroughs and friend Walt Whitman would have walked by over one hundred years ago. 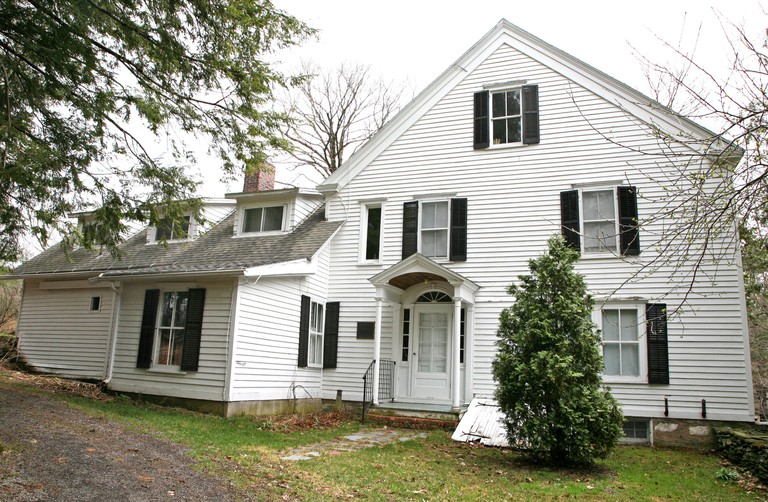 Steepletop, New York | Courtesy of the Millay Society
In 1925, Edna St. Vincent Millay, a Pulitzer Prize-winning poet and prominent figure of the literary scene in Jazz Age-Greenwich Village, moved out of the swing of city life to a 19th-century farmhouse in upstate New York. However, this move didn’t signal that Millay was settling down or changing her free-spirited flapper lifestyle. At Steepletop, named for the Steeplebush that grew on the property, Millay and her husband entertained many bohemian and artist types at the property’s swimming pool where skinny-dipping was encouraged, and at the poolside bar where the cocktails flowed unrestricted by prohibition. When quiet time was needed, Millay retired to her pine tree-sheltered writing shed where she wrote some of her most significant pieces. The poet also found solace in designing and maintaining the gardens of her 700-acre property, creating different areas such as a walled rose garden and rock garden of Siberian iris. Millay lived at Steepletop until her death in the house on the night of October 19th, 1950. Largely due to the care of her sister and The Millay Society, the home has remained almost exactly as it was the night of her death. Guided tours of the home are offered to the public and the grounds are open for strolls and picnics. The society also hosts other special events and a behind the scenes tour where visitors can catch a peek of rooms that are not open to the public.

Museum
Facebook
Email
Twitter
Pinterest
Copy link
Share
There’s no place like home for a museum dedicated to your life’s work, and for L. Frank Baum home was Chittenango, New York. Baum is the author of The Wonderful Wizard of Oz –the novel that inspired the classic Judy Garland film and other interpretations such as the novel and Broadway play, Wicked. In homage to Baum and his wonderful work, The International L. Frank Baum & All Things Oz Historical Foundation created a museum called All Things Oz Museum in his hometown. Though not housed in a former residence of Baum’s, the museum exhibits Oz memorabilia and personal items from Baum’s life. The foundation of volunteers that run the museum also hosts the annual Oz-Stravaganza! Festival which features The Wizard of Oz-related guests, entertainment, vendors, and more. Recently, the foundation acquired the Baum-Neal House, a Syracuse home that belonged to Baum’s sister, and is the place where he met his wife. The foundation is currently restoring the property and plans to open it as another Oz attraction where Baum’s life story will be told through his own letters and writing.
Give us feedback