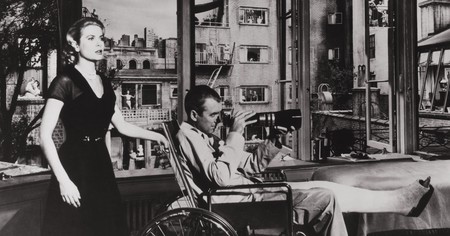 Probably beginning with Herald Square (1896), thousands of movies have been set in New York City. These 21 New York film locations can justifiably be called the best.

Billy Wilder’s sardonic romantic drama, a 1960’s Best Picture Oscar-winner, lacerates the sleazy corporate politics of an era when male workers treated their workplace as a pick-up joint. Insurance clerk C.C. Baxter (Jack Lemmon) has found that lending his Upper West Side brownstone apartment to his bosses so they can sleep with their female colleagues is the surest means of getting a quick promotion. Baxter begins to rue his decision when he discovers that the elevator operator (Shirley MacLaine) he loves has been having a ruinous affair with his adulterous boss (Fred MacMurray). Look for the scenes when Baxter catches a cold in Central Park (as Lemmon really did), meets a Brooklyn barfly (Hope Holiday) on Christmas Eve, and is upbraided by the doctor neighbor (Jack Kruschen) who thinks he’s a Casanova. The Apartment had a marked influence on Mad Men. 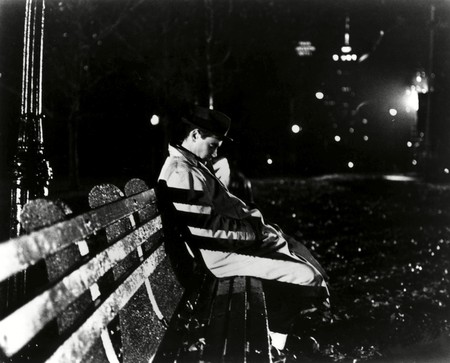 Jack Lemmon in “The Apartment” | © Moviestore/REX/Shutterstock

Written and directed by Joseph L. Mankiewicz, the 1950 Best Picture Oscar-winner skewered egoism and ambition among New York theater types at a time when there was intense rivalry between Broadway and Hollywood. Bette Davis stars as the ageing diva who hires a supposedly smitten fan (Anne Baxter) as her assistant, only to find the girl is intent on replacing her as Broadway’s ruling actress. Locations include the theater at 242 West 45th Street (then the Royale, now the Bernard B. Jacobs Theater), “21” Club, West 52nd Street, and Fifth Avenue. All About Eve is the only movie for which four actresses have been Oscar-nominated, but stars Davis and Baxter and supporting actresses Celeste Holm and Thelma Ritter all went home empty-handed. 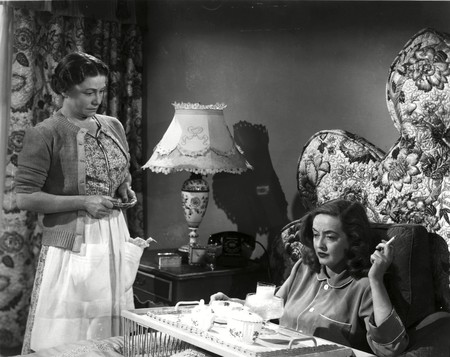 Spike Lee’s rueful drama mostly unfolds on the night before convicted drug dealer Monty Brogan (Edward Norton) starts a seven-year sentence in an upstate prison. It meshes together Monty’s ruminations, recollections, and a concluding fantasy of escape; he also indulges an explosive bathroom rant against New York City stereotypes. Though 25th Hour isn’t “about” 9/11, New York City’s collective PTSD is implicit in the movie’s pervasive anxiety, as evidenced by the shots of Monty and his friends (played by Philip Seymour Hoffman and Barry Pepper) looking down on Ground Zero before they go clubbing. Rosario Dawson, Anna Paquin, and Brian Cox co-star. 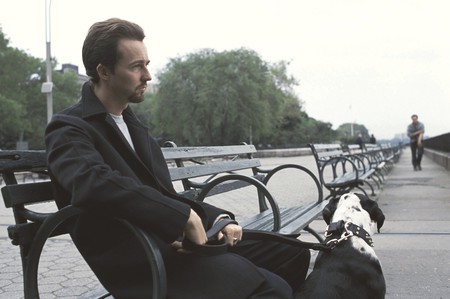 American flags flap bravely in the Manhattan breeze in Jane Campion’s neo-noir, another film exuding the post-9/11 mood of fear and vulnerability. Based on Susanna Moore’s feminist thriller, In the Cut gave Meg Ryan her best role – and elicited her best performance – as writing professor Frannie Avery, who begins a sexually intense affair with a police detective (Mark Ruffalo) investigating a prostitute’s murder in Frannie’s neighborhood. Jennifer Jason Leigh excels as Frannie’s lovelorn sister. Campion makes memorably atmospheric use of 7th Street, the Lower East Side, and especially the Little Red Lighthouse beside George Washington Bridge. 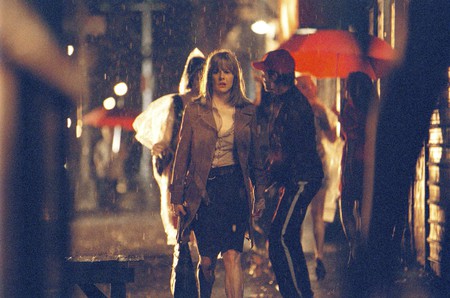 Meg Ryan in “In the Cut” | © Moviestore/REX/Shutterstock 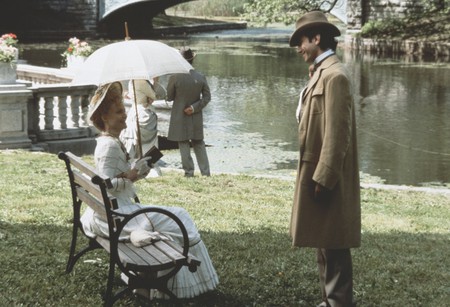 Alexander Mackendrick’s sour masterpiece nails the inherent viciousness of power-broking in New York journalism. Desperate to get his clients mentioned in the syndicated column written by the monstrous J.J. Hunsecker (Burt Lancaster), press agent Sidney Falco (Tony Curtis) agrees to break up the relationship between J.J.’s sister Susie (Susie Harrison) – on whom the columnist unhealthily dotes – and her jazz guitarist boyfriend (Martin Milner). Where does Sidney draw the line? Some of the best scenes take place in the Brill Building and at “21” Club, where J.J. ruthlessly holds court. 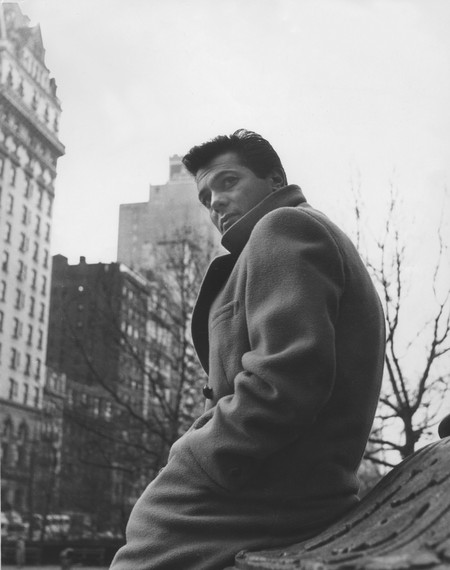 Simmering racial tensions in the summer heat lead to a white cop choking an African-American man to death, which causes a street riot and the burning down of a Bedford-Stuyvesant pizzeria. One of Spike Lee’s most important films – and still one of his best – Do the Right Thing was partially inspired by the racially prompted killing of Michael Griffith, a Trinidadian immigrant, in Howards Beach, Queens, in December 1986. 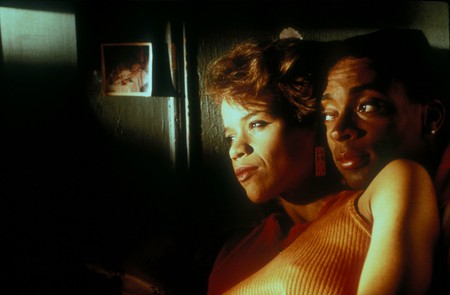 A celebrated Alfred Hitchcock thriller, Rear Window stars James Stewart as L.B. “Jeff” Jefferies, a voyeuristic wheelchair-bound photographer who realizes that one of his neighbors (Raymond Burr) has murdered his wife. Grace Kelly co-stars as Jeffries’ beautiful socialite girlfriend whose fussing around him intensifies his sense of impotence. The Greenwich Village apartment building Jeffries gazes on at “125 West Ninth Street” was modeled on the one at 125 Christopher Street, which still exists. Though Rear Window was filmed on Hollywood sets, it captures the unease engendered by compressed living in Manhattan. 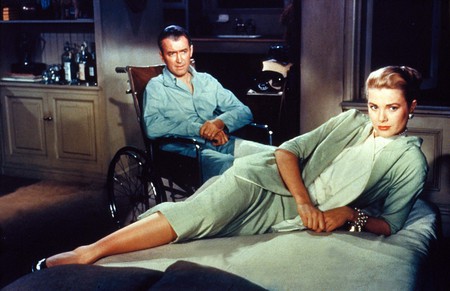 New York is, historically, a city of immigrants from different countries. Robert Wise and Jerome Robbins’ Romeo and Juliet reboot West Side Story – based on the 1957 musical – showed the depth of the cultural divides via the rumbles between the Sharks and Jets, respectively Puerto Rican and white street gangs. The setting was the Upper West Side’s old Lincoln Square tenement area, which was demolished to make way for the Lincoln Center complex in the early 1960s. Some of the filming took place where the West Side meets the East Side on 110th Street. 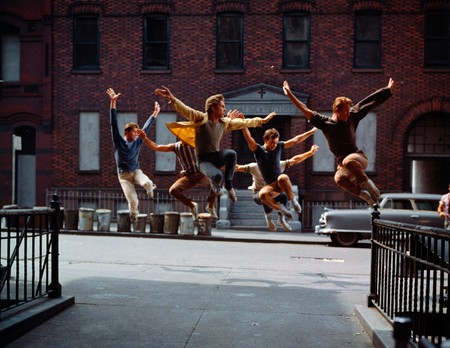 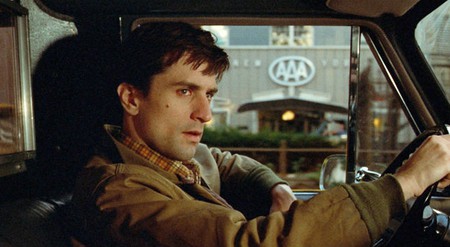 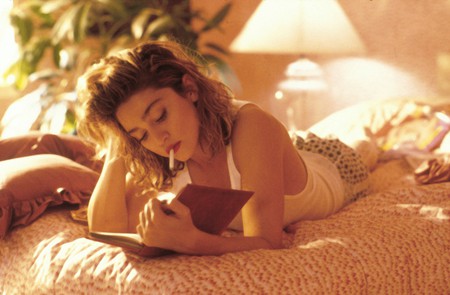 In this eternally hip comedy, Bill Murray, Dan Ackroyd, and Harold Ramis play the parapsychologists who save New York City from a ghost infestation and a 100-foot marshmallow man. Among the New York institutions captured in Ghostbusters were Columbia University, the New York Public Library, Columbus Circle, and the Waldorf-Astoria Hotel. Sigourney Weaver and Rick Moranis co-star. 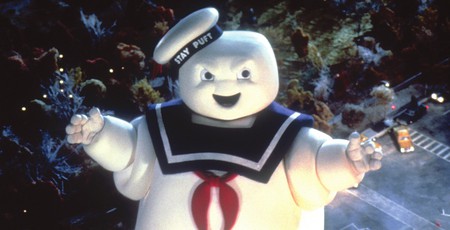 Partially shot at the Chelsea Hotel, Andy Warhol’s split-screen avant garde film allowed such Factory “Superstars” as Nico, Ondine, Brigid Berlin, International Velvet, and Mary Woronov to express themselves freely as they talk, rant, shoot up speed, or conduct other day-to-activities. Featuring a high dose of sadism and masochism, it’s both a genuinely experimental underground documentary and a provocative put-on. 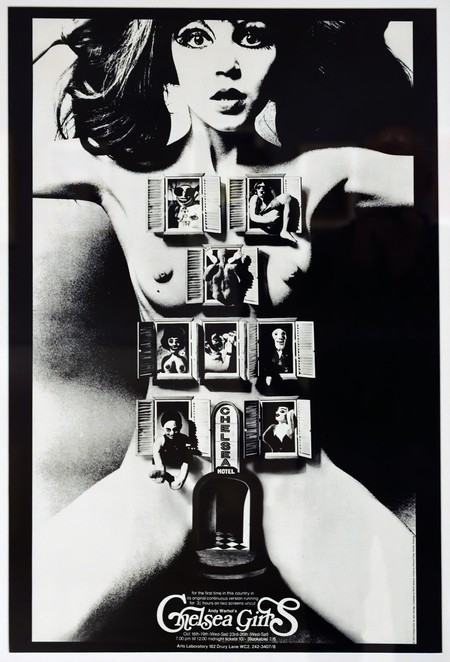 Delancey Street is a main thoroughfare in the traditionally Jewish Lower East Side. In director Joan Micklin Silver’s beloved rom com, based on a play by Susan Sandler, Izzy Grossman (Amy Irving) must decide whether to gravitate toward the world of non-Jewish intellectuals (symbolized by Jeroen Krabbé’s handsome author) or give a chance to the Jewish “pickle man” (Peter Riegert) found for her by a matchmaker. Dating for thirtysomethings in New York City is scarcely a bed of roses – whatever one’s ethnicity. 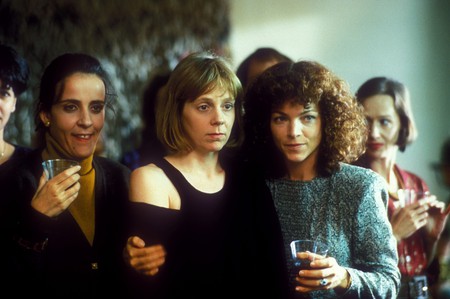 Mary Harron’s bloody satire, based on the novel by Bret Easton Ellis, targets the arrogance, hedonism, bland taste, and conspicuous consumerism of Wall Street yuppies, as personified by serial-killing investment banker Patrick Bateman (Christian Bale). There’s no better guide to the era’s trendiest restaurants and nightclubs – some of which have closed, some of which survive, and some of which never existed at all. 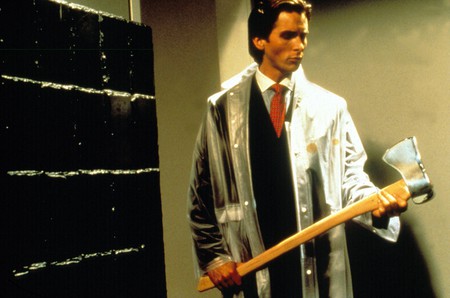 Often invoked as cinema’s greatest ode to the disco era, Saturday Night Fever is rooted in the desperation felt by a Brooklyn kid – John Travolta’s Tony Manero – who wants away from his dead-end job, his miserable family life, even his hapless friends. Bensonhurst, Bay Ridge, and the Verrazano Narrows Bridge provide backdrops for Tony’s struggle to avoid a soulless existence. Stayin’ alive is the name of the game. 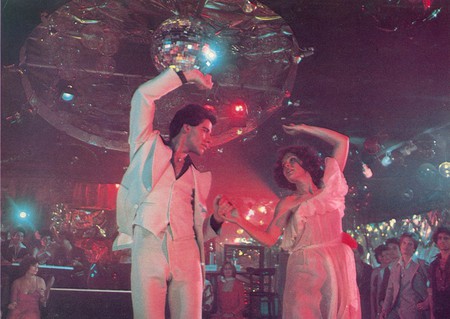 There’s no greater homage to Manhattan than the opening montage of Woody Allen’s bittersweet comedy. Scored to George Gershwin’s “Rhapsody in Blue,” its shots of uptown, midtown, and downtown inspire writer Isaac Davis (Allen) to wax virilely about his love for the city in his voiceover narration. The story that follows is a saga of romantic catastrophe – Isaac unwisely forsaking the 17-year-old (Mariel Hemingway) who loves him for a pretentious, neurotic intellectual (Diane Keaton) who’s still in love with Isaac’s married friend. 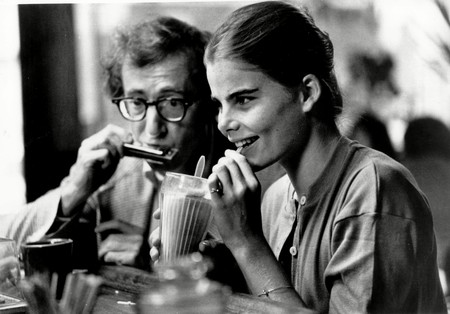 “Ah, I just love New York,” sighs Holly Golightly (Audrey Hepburn), the consummately stylish – and oddly virginal – call girl in Breakfast at Tiffany’s, director Blake Edwards’ loose adaptation of Truman Capote’s novella. If, at 5am, you see a young woman looking longingly at the jewellery in the window of the Tiffany’s Fifth Avenue store with a Danish and a cup of coffee in hand, you’ll know which movie’s she’s been watching.

Get the scoop on this classic flick and other movies set in New York on our curated film and TV tour – combining things to do and a hotel with film buffs in mind. 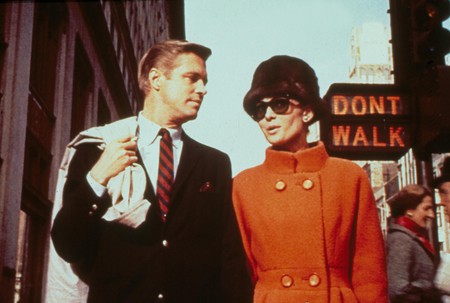 Michael Keaton plays Riggan Thomson, a fading Hollywood star trying his luck as a writer-director-leading man hubristically mounting a theatrical adaptation of a Raymond Carver story on the Great White Way. Alejandro G. Iñárritu’s acid Oscar-winning comedy does for Broadway and Broadway types what All About Eve did for them in 1950. The movie gives the impression it was shot in a single take, the funniest bit of which follows Riggan, dressed only in his shorts, as he goes on an enforced walk around a teeming Times Square.

The Greenwich Village folk scene in 1961 is the setting for Joel and Ethan Coen’s wintry comedy about talented singer-songwriter Llewyn (Oscar Isaac), who is hampered by his stubbornness and a self-destructive streak. The Coens nailed the ambience of the Village clubs, streets and tenements of the time. There’s also a vivid foray uptown and another to Washington Square Park where a married fellow folkie (Carey Mulligan) lambasts Llewyn for making her pregnant. 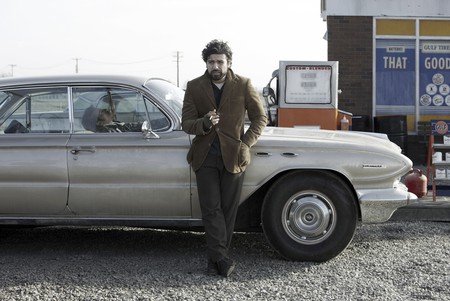 As bodies jostle on a New York City subway train, the grifter Skip McCoy (Richard Widmark) picks the handbag – an alarmingly graphic metaphor for sexual revulsion – of fellow passenger Candy (Jean Peters); the wallet he lifts from her contains microfilm of top secret US government information she is unwittingly carrying for her Communist spy ex-boyfriend. Samuel Fuller’s gripping Cold War film noir was mostly filmed in Hollywood, but it offers a genuine tang of Manhattan in the early 1950s thanks to artful use of back projection and second unit locations. These include the New York Public Library, Kent Avenue at North 6th Street in Williamsburg (standing in for the South Street area known to Fuller when he was a crime reporter), the Williamsburg waterfront, and the corner of Broome and Center streets in Little Italy. 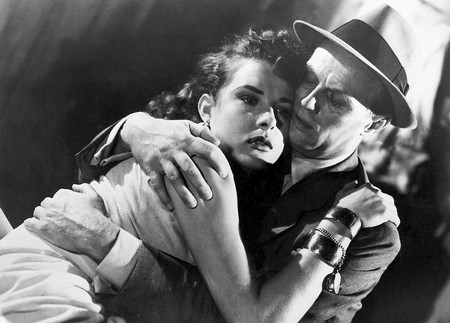