A Look at the 20 Bridges Swim Around New York City 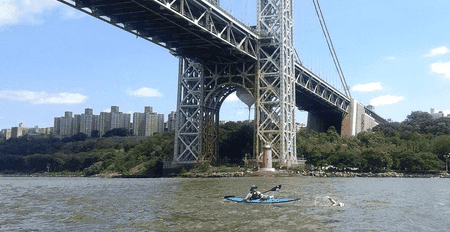 The 20 Bridges Swim is a swim around the island of Manhattan via its three rivers. Veteran Kris Rutford and first-timer Abby Bergman share their thoughts on the event.

Kris Rutford and Gary Antonick met just once. Little did Rutford know, that encounter would change his life.

Rutford and his college friend Bob Mizelle took turns swimming the English Channel in 1987 and 1988. During his go in ’88, Rutford met Antonick, who also swam the Channel that year. Antonick told Rutford of another distance swim that might be of interest: the 20 Bridges Swim.

Thirty years later, Rutford, 56, will swim around the island of Manhattan for the 22nd time after a three-year hiatus.

“The only time I met the guy and he changed my life,” says Rutford of Lincoln, Nebraska. 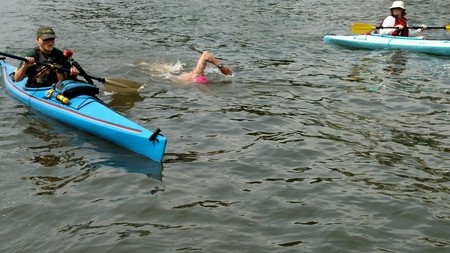 The 20 Bridges Swim is a 28.5-mile circumnavigation around the island of Manhattan via the East River, Harlem River, and Hudson River, under its 20 bridges. New York Open Water, which now hosts the event, conducts a series of four swims each summer composed of up to 15 participants. The feat is part of open-water swimming’s triple crown, along with the English Channel and Catalina Channel.

Completing that trifecta is why Abby Bergman is coming across the country from Los Angeles for her July 14 swim. The 22-year-old swam Catalina in 2016, the English Channel in 2017, and will complete her triple crown this summer.

“I like the challenge of it,” Bergman says. “I want to see how far I can push myself. I also love swimming. Some people don’t get that and ask, ‘How can you do that for hours?’ but I love the repetitive motion and getting into a zone.” 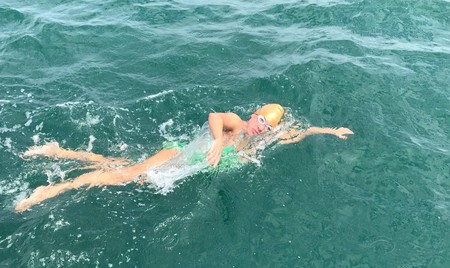 Participants from all across the world will descend on New York City for this open-water challenge, with swims taking place on June 30, July 14, Aug. 25, and Sept. 8.

Distance aside, each of the rivers provides its own unique set of challenges. The East River can be difficult depending on the tide and wind, while the Harlem River is warmer and more tranquil. The Hudson River proves to be the most difficult due to increased boat activity. 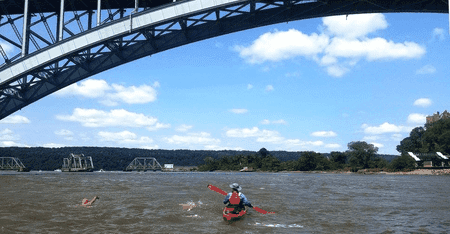 The 20 Bridges Swim is a 28.5-mile circumnavigation around Manhattan | © Jozef Koppelman

“It’s always a challenge,” Rutford says. “I took it for granted once and had a hell of a time getting around. … I’m older now, hopefully a little bit wiser, too.”

“It will be a mentally challenging swim,” she says. “I’ve never done a long swim like that in a river before.”