15 Things to Do in New York City This Christmas 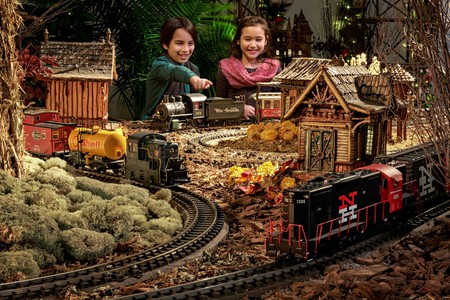 Come Christmastime, being in New York City is a gift in itself. From timeless Christmas traditions to gorgeously gaudy light displays to just plain weird winter events, there’s plenty to celebrate in New York this holiday season. Consider this our gift to you— here are 15 things to do in New York City this Christmas. 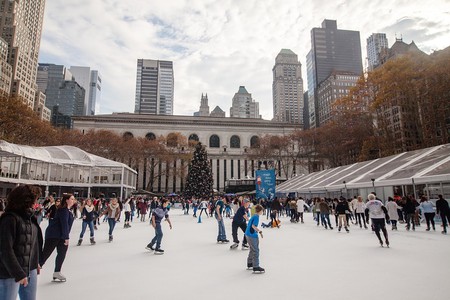 A saccharine seasonal tradition not even locals can resist, the Radio City Christmas Spectacular proves wholesome holiday fun never goes out of style. Watch American icons the Rockettes (36 of them, to be exact) take the stage along with three-foot-tall hats, winter-themed props, and more surprises which can only be described as spectacular. If you’ve been nice rather than naughty, old Chris Crinkle may even make a guest appearance. 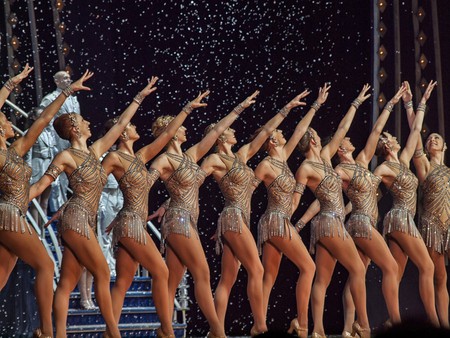 Since 1933, the Rockefeller Center Christmas Tree has been as crucial to Christmastime in the city as hot chocolate, outdoor ice skating, and (you love to hate it) packed stores. Towering above the city at 69- to 100-feet-tall and decked out with approximately 45,000 LED bulbs, the tree makes even the big bad city feel cozy. Top tip: this year’s lighting ceremony, featuring live performances, will take place on November 29. 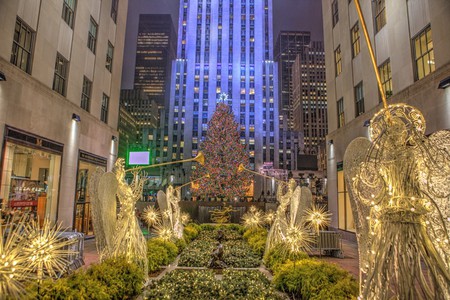 The Rink at The Standard, High Line

Count on the city’s coolest hotel chain to deliver an ice rink with an edge come wintertime. Promising to “warm your character and opinion, or your money back,” The Rink at The Standard, High Line features stylish ski lodge vibes via food items like Swedish meatballs and bread and cheese volcanos designed to be washed down with rum-spiked hot chocolate and mulled wine. Oh, there’s also ice skating to work off those calories—or not. 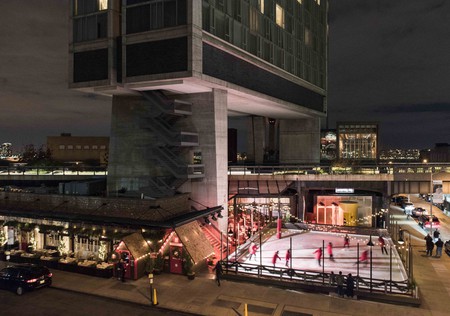 What began in the 1980s as a friendly competition between neighbors has evolved into a blinding blowout enjoyed by people from across the city. Ask any local where to find the best Christmas lights in New York, and they’ll point you away from mainstream attractions toward Brooklyn’s Dyker Heights. This off-the-beaten-path place has become a wintertime destination thanks to its residents’ over-the-top light displays, some of which are professionally done to a cost of over $20,000. 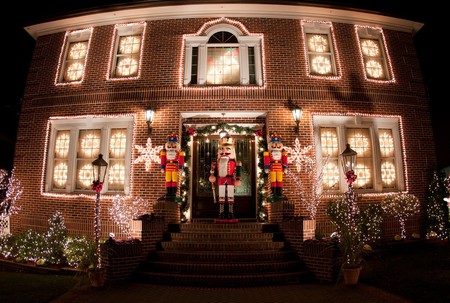 Have dinner at Rolf’s

Patrons come to Rolf’s for the schnitzel and stay for the restaurant’s dazzling (or should we say, dizzying?) Christmas decorations, which include hundreds of lights and décor on display starting in September. Over the past 40+ years, the German eatery in Gramercy Park has become the city’s most surprising Christmastime mainstay. Although, considering Rolf’s imported beer selection, wiener, jaeger and paprika schnitzels, and unpretentious atmosphere, the spot’s success isn’t so surprising after all.

Come wintertime, while the rest of the country does its holiday shopping, New Yorkers take time to window shop. Holiday window displays are a fixture of the city’s Christmas culture, transforming a snowy trek down Fifth Avenue into the season’s most magical stroll. While many stores take part in this tradition, we recommend the iconic Bergdorf Goodman, Barneys, Macy’s, Bloomingdales, and Saks Fifth Avenue in particular.

Kids (and kids at heart) will love this old-school attraction putting the ‘wonder’ in ‘winter wonderland.’ At the New York Botanical Garden’s Holiday Train Show, model trains whiz through a nearly half-mile display comprising 150 landmarks, such as the Brooklyn Bridge, Rockefeller Center, and the Empire State Building. Even more magical? All of these figures are constructed from bark, leaves, and other materials found in nature. 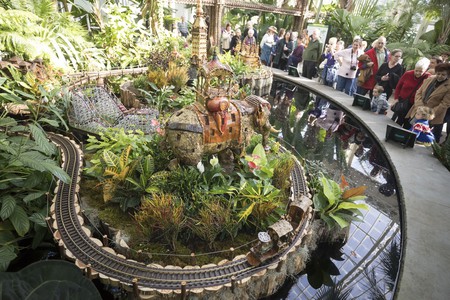 As you may have gathered by now, Christmas in the Big Apple calls for big decorations. One of the city’s most famous (and photographed) holiday decorations is Sixth Avenue’s ornament installation. Each year, humongous Christmas ornaments find their way outside of Rockefeller Center and other Midtown addresses, much to the delight of tourists, photographers, and Instagram enthusiasts. 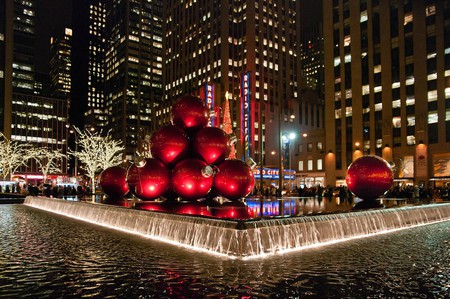 Wondering where a real New Yorker gets their holiday shopping done? For the answer (and some ‘only in New York’ finds), head to Brooklyn Flea’s holiday market in trendy Industry City. The winter edition of the city’s favorite flea market will feature 50 vendors, 10 Smorgasburg eateries, beer, wine, and cocktails, and the perfect presents for everyone on your list. 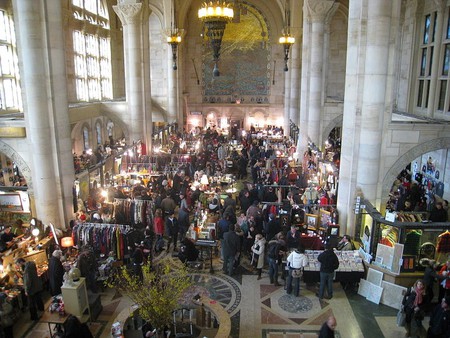 A year-round attraction, New York City’s Empire State Building can be seen in a new light (literally) during the Christmas season. Since 1976, the famous skyscraper has changed its tower lights in recognition of various occasions throughout the year, such as the opening night of the Radio City Christmas Spectacular. With its LED light system capable of displaying a whopping 16 million colors, the icon presents dazzling light shows observable from around New York City. 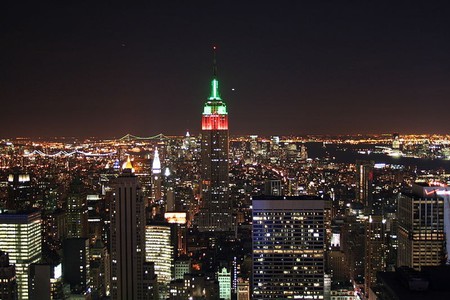 This winter, enjoy your drink with a Christmas twist at the season’s most merry (and madcap) bar crawl. Don your best Santa suit for SantaCon NYC 2017, a viral event blurring the lines between naughty and nice. At this beloved holiday blowout, you’ll get the chance to mingle with other Kris Kringles as you parade from bar to bar, raising spirits (and eyebrows) along the way. 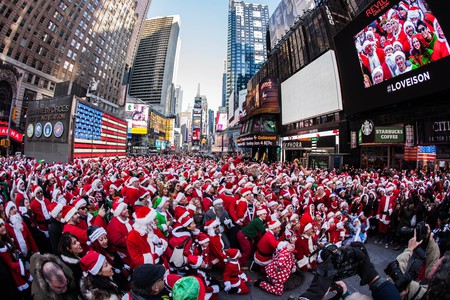 Think science is stuffy? This quirky Christmas tradition at the New York Hall of Science (NYSCI) will change your mind—and stimulate your appetite. At NYSCI’s Gingerbread Lane exhibition, you’ll explore a gingerbread village (the largest from 2013 to 2015 according to Guinness World Record) comprised entirely of edible homemade gingerbread, royal icing, and candy. Expect plenty of sweet photo-ops and a difficult time following the exhibition’s ‘no touching’ rule.

Not your parents’ caroling experience, this international holiday tradition blends classic Christmas fun with contemporary technology to create the most stunning symphony of the season. Since 1992, Unsilent Night has brought its brand of musical merriment to 101 cities, including New York, Brussels, and beyond. This year, you can join the promenade of participants carrying boom boxes, smartphones, and other music broadcasters, all playing one of four different tracks which together form a cohesive Christmas piece. 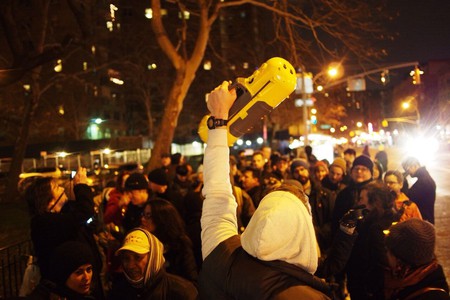 Image courtesy of Unsilent Night
Give us feedback