10 Works By Keith Haring You Should Know 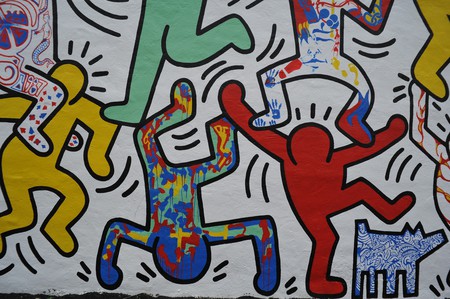 As one of the most iconic figures of the New York City art scene in the 1980s, Keith Haring’s highly recognizable works are both visually mesmerizing and socially significant. Depicting the artist’s unique rendering of social and political issues such as sexuality and war, Haring’s work stands at the intersection of graffiti and pop art, and it created a contemporary genre of its own. We profile ten essential works by this legendary NYC-based artist.

In this vinyl ink painting on vinyl tarpaulin, Haring brings us his iconic human and dog depictions, painted in black and set against a yellow backdrop. Themes of sex, birth, and death are present in this chaotic work, as one figure gives birth to a child, and others meet an untimely end, eaten by a dog and falling through a black hole.

This vinyl ink painting bearing a traditional street art aesthetic depicts a central figure in clear distress, flanked by an upside-down heart and the atomic symbol, headlined with the words ‘USA 1982.’ By the time Haring painted Untitled, he had established friendships with fellow contemporary artists such as Kenny Scharf and Jean-Michel Basquiat, both of whom had a clear aesthetic and social influence on Haring.

Untitled was one of several collaborations between Haring and artist LAII. This acrylic on canvas work bears several iconic symbols associated with Keith Haring, including barking dogs, running figures, and pyramids. Central to the canvas is a space ship, wreaking havoc on everything surrounding it. This busy and chaotic piece merges elements of graffiti and fine art. 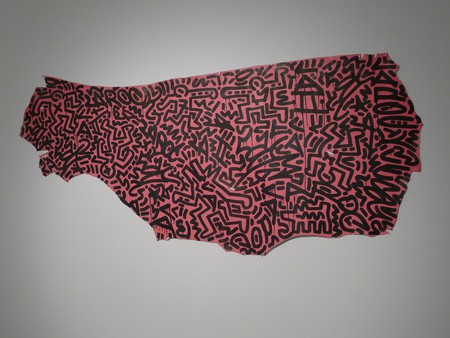 One of Haring’s most implicit works, Untitled (1983) speaks to the spirit of the age in the 1980s when pop culture was booming in the United States. In a decade of blind consumerism, Haring depicts a crucified figure dying on a television screen that’s placed at the center of its own cross in front of an audience that both worships and celebrates the television as an object, as well as the image it’s projecting. Communicating the idea that media is slowly, torturously killing the masses, Untitled is among Haring’s most socially significant works.

One of Haring’s few acrylic on muslin paintings, Untitled (1984) serves as another depiction of the artist’s disgust with the media. At the center of the painting is a human-like creature with a computer for a head, manhandling various smaller human figures around it. The nature of this artwork is intended to be discomforting, as the central figure itself is also poked and prodded by large hands emerging from the top of the frame. 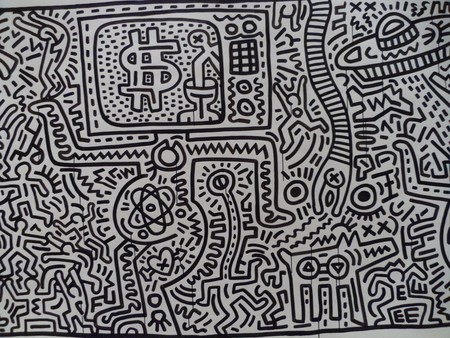 Haring worked in a variety of mediums, from canvases to street art, sculpture, ceramics, and body paint. By the early 1980s, Haring had developed a friendship with iconic pop artist Andy Warhol who introduced him to Jamaican singer, model, and actress, Grace Jones. Warhol believed Grace Jones’s body to be Haring’s perfect canvas, as she embodied Haring’s commonly revisited ideals of both ‘primitive’ and pop culture. Thus, Warhol arranged for his friend Robert Mapplethorpe to photograph Grace Jones painted by Keith Haring, adorned with a tall headpiece (also designed by Haring) and rubber jewelry by David Spada.

Created in collaboration with Andy Warhol, Untitled (1985) is a synthetic polymer, dayglo, and acrylic painting on canvas, designed to look like the front page of the New York Post. Next to a characteristically Warhol-esque photograph of pop singer Madonna is one of Haring’s iconic human-like figures, painted over a headline reading, ‘PREZ ON WARPATH.’ Untitled (1985) perfectly captures the aesthetics and legacies of both icons, who were equally important to the art world (and beyond) at the same time.

Haring often worked in black and white, occasionally employing primary colors such as red and yellow in his works. Untitled (1986), however, is one of Haring’s most colorful paintings, and one in which he strays from his typical primary color palette. This work, in acrylic and oil on canvas, signifies a departure not only from monochromatic colors but also from Haring’s usual symbols of moving figures and dogs. Rather, Untitled (1986) depicts a Picasso-like face at the forefront of a conglomeration of shapes, serving as one of his more abstract works. 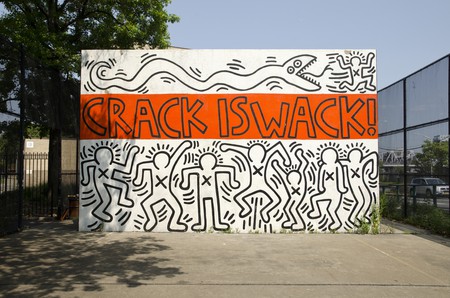 One of Haring’s most famous works is a public mural painted on a handball court on 128th Street and 2nd Avenue. Painted in 1986, Crack is Wack was a direct response to the crack epidemic that swept New York City in the 1980s. The mural was never commissioned nor did the city grant Haring permission to paint it, but Haring executed the piece as a personal warning. The mural still exists today, protected by the City Department of Parks. 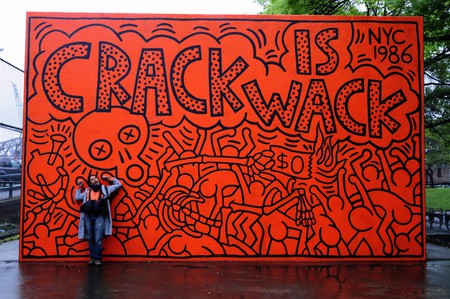 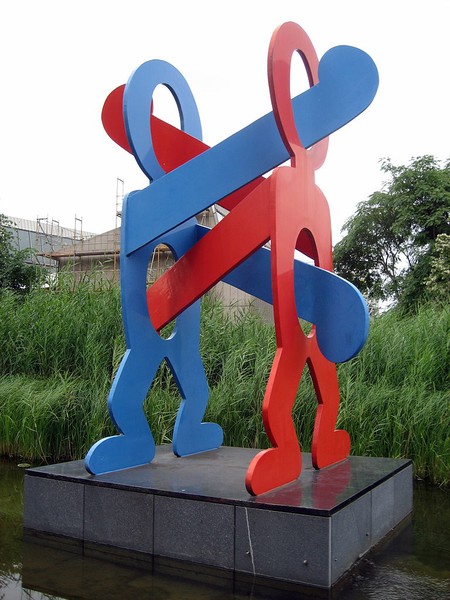