Things to See and Do in Hell's Kitchen, New York City

Hell's Kitchen keeps the pulsing energy of Midtown Manhattan, while enjoying a vibe that is more local and laid-back | © John Piekos / Getty Images

Known for its colorful characters, international eateries and Off-Broadway shows, Hell’s Kitchen is a New York City neighborhood that deserves a closer look. Whether you’re looking for a hidden gem Thai restaurant or a base-thumping gig at Terminal 5, here are Culture Trip’s top recommendations.

New York City is a melting pot of cultures, and perhaps nowhere is that more apparent than the Hell’s Kitchen neighborhood. The pulsing energy from nearby Times Square is palpable here, but the vibe is far more local and laid-back. Its main thoroughfares – 9th and 10th Avenues, between West 34th and West 59th Streets – are veritable parades of luxury condos and theaters, as well as bars and restaurants. Expect cuisine from nearly every corner of the world, whether that’s Cuba, Japan or Ethiopia, plus a truly creepy haunted house. Here are the top spots that give Hell’s Kitchen its energy and character.

Chow down at El Burrito Box

Bar, Mexican
Facebook
Email
Twitter
Pinterest
Copy link
Share
Map View
It’s remarkable that such a small hole-in-the-wall houses such unforgettable food. Amid the Hell’s Kitchen lunch rush, you can count on El Burrito Box to be overflowing with patrons for good reason. As if complimentary homemade chips and salsa are not enough of a draw, their fat, loaded burritos offer a different blend of ingredients that prove quite refreshing compared to the chains. Though mostly a spot for take-out, those lucky enough to snag a barstool can enjoy some good 9th Avenue people-watching while savoring every last bite.

Grab a hot dog at Rudy's Bar and Grill 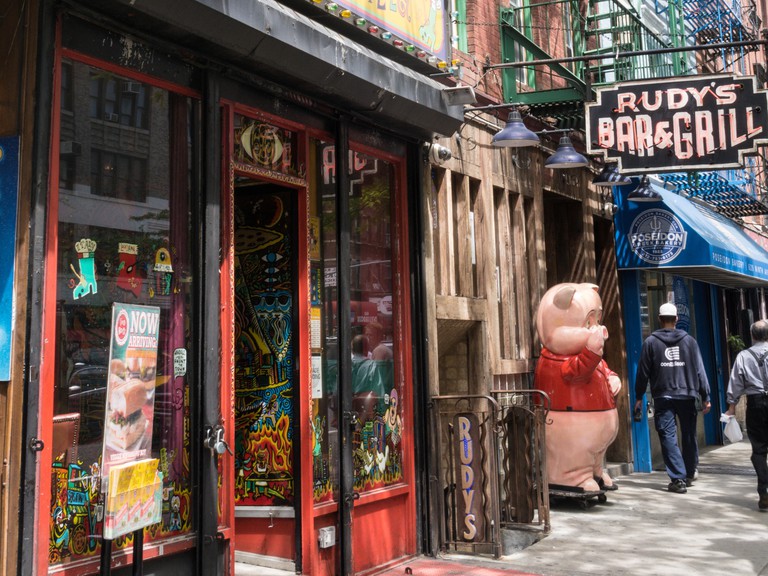 © Patti McConville / Alamy Stock Photo
Rudy’s offers its patrons complimentary hot dogs with each drink order. Formerly a speakeasy that has since been frequented by some of New York’s most famous residents, this dive is easy to spot for its iconic pig statue, which has served as the bar’s vigilant bouncer for two decades. Rich with history, booze and hot dogs, Rudy’s Bar is a must for travelers and New Yorkers alike.

Bar, Pub Grub, $$$
Facebook
Email
Twitter
Pinterest
Copy link
Share
Map View
With a beer list sent from the heavens, it’s no wonder this beer hall on 9th Avenue gets its name from the Viking place of eternal rest. Beer lovers will swoon at the wall-to-wall taps, serving up the best brews for all seasons. Valhalla takes bar food up a notch as well, with savory sliders and buffalo wings packing a unique kick. It amplifies the average bar experience by putting an emphasis on quality flavors. Beer fans from far and wide will all tell you: this bar is nothing short of paradise. 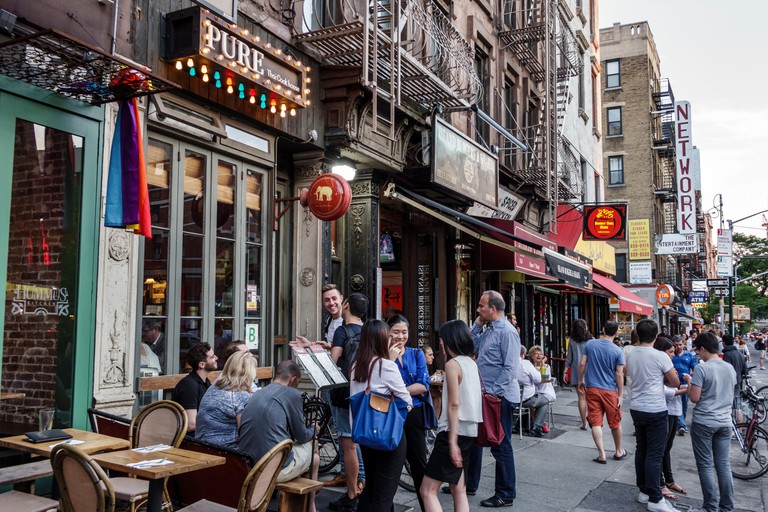 In a stretch of Thai restaurants, Pure Thai Cookhouse is without a doubt one of the surest bets. The ambience of this tiny gem has an authentic charm that is sometimes absent from many other spots in the neighborhood. Along with their quiet, tasteful aesthetic, Pure’s number one priority is flavor – and they deliver. Make sure you try the Ratchaburi crab served with homemade pork noodles, passed down from a family recipe. They don’t take reservations, so get there early for dinner.

Bar, American
Facebook
Email
Twitter
Pinterest
Copy link
Share
Map View
Once you get past the seemingly endless crowd ordering drinks, Bar Nine will show you a good time. The space includes a few classic arcade games, pool tables, a photo booth and Skee-Ball. But it’s most famous for its live music, every night of the week. Head down on Fridays and Saturdays to catch the Dueling Piano Show featuring Donnie Kehr of Jersey Boys. This ain’t no Frank Sinatra sing-a-long; expect everything from rap to country music. If you want to see what we’re talking about, it’s best to reserve a place in advance.

Catch a gig at Terminal 5 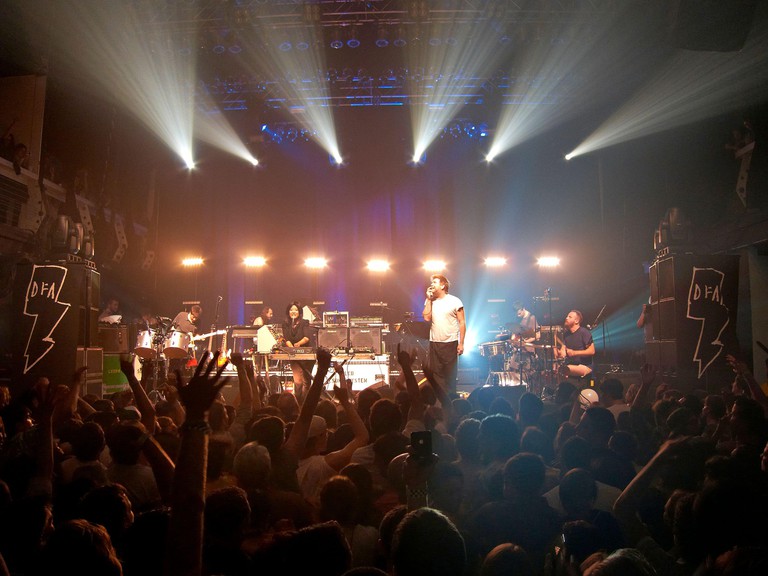 © John Muggenborg / Alamy Stock Photo
Many New Yorkers seem to have a love/hate relationship with this Hell’s Kitchen’s venue. Nearly all of us have endured a night or two here that we have surely never forgotten. From sold-out shows that barely afforded space to dance in front of the stage, to rubbing shoulders with famous faces, Terminal 5 is something of a rite of passage in our city. With three staggering floors, it is easy to find space to get your swerve on or just hang by one of the many bars.

This art gallery (and its studio space in Queens’ Long Island City) provides a platform for artists with mental illness to exhibit their work. Displays range from fiber art, exploring the themes of dreams and transience, to graffiti-style spray paint on board, inspired by the grit and energy of New York City streets. Note: it’s open every day except Mondays. 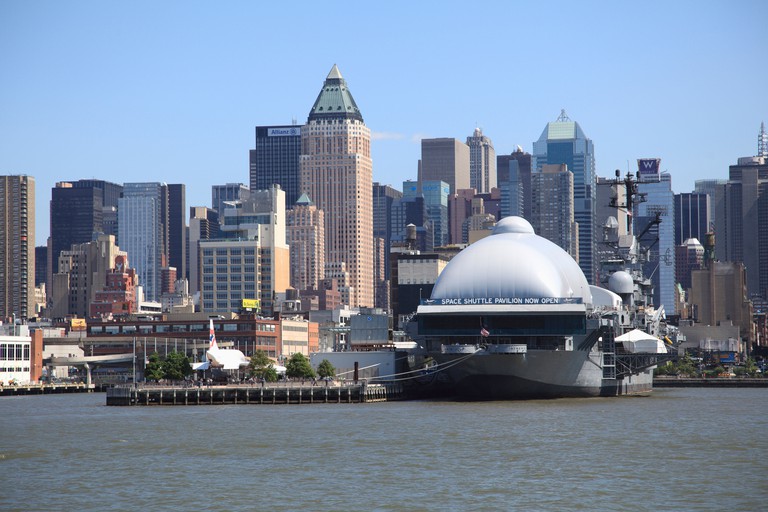 © robertharding / Alamy Stock Photo
Head to the waterfront and you’ll find an enormous aircraft carrier permanently docked at Pier 86. The USS Intrepid fought in World War II as well as the Vietnam War; now, it’s a museum. Climb aboard to learn more about American military history, as well as snap photos of the Concorde and the Space Shuttle Enterprise. You can even clamber inside Growler, the only US guided missile submarine open to the public. Guaranteed to be a good afternoon for families and military history buffs.

Venture into Bane Haunted House, if you dare

Amusement Park
Facebook
Email
Twitter
Pinterest
Copy link
Share
Map View
Just going by the numbers, Bane Haunted House is the biggest and baddest haunted-house attraction in the city, with more than 100 live performers and nearly 40 terrifying rooms spread over 40,000sqft (3,715sqm). The super-committed actors, the labyrinthine design and the climactic ending confirm this spectacle’s fear factor. Expect to get separated from your group, crawl through a “morgue” and get stuffed in an upright coffin. If you can’t handle it, yell mercy to be escorted out (without a refund).