New York City’s international importance can be experienced through its public spaces, with numerous outdoor sculptures dotting nearly every neighborhood. From statues and monuments to major landmarks, we profile ten must-see outdoor sculptures in New York.

A universal symbol of freedom, the Statue of Liberty personifies both New York City and the United States. This colossal neo-classical landmark, located on Liberty Island, is perhaps the most iconic statue in New York. “Lady Liberty,” as she is affectionately referred to, has welcomed immigrants to New York City since 1886, when she was presented by France as a symbolic gift from the Old World of Europe to the New World of America. Sculptor Frederic August Bartholdi was inspired to create a monument to Liberalism, embodied by the Roman goddess Libertas, who bears a torch and a tablet upon which is inscribed the date of the American Declaration of Independence: July 4th,1776. 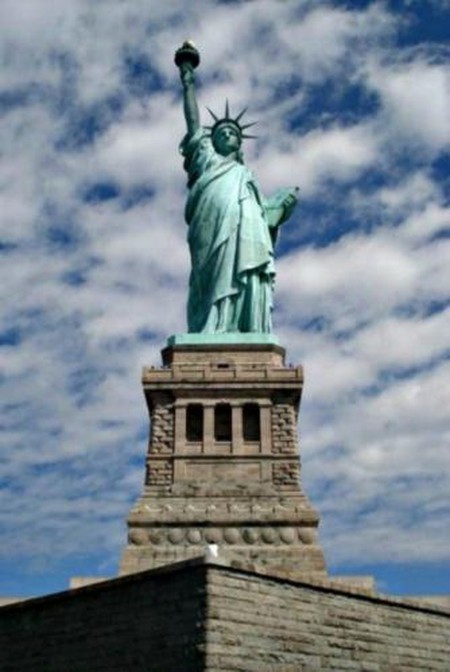 Also known as The Bull of Wall Street, this sculpture is located near Wall Street at the crossroads between Broadway and Bowling Green Park. The bull symbolizes the aggressive nature of capitalism and represents the hope of a “Bull market” – a term referring to positive growth and prosperity in the financial industry. Charging Bull was sculpted in 1987 by the Italian-American sculptor Arturo Di Modica following a stock market crash, and was dedicated to “the strength and power of the American people.” 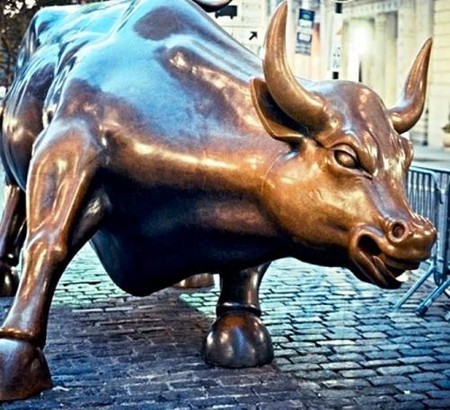 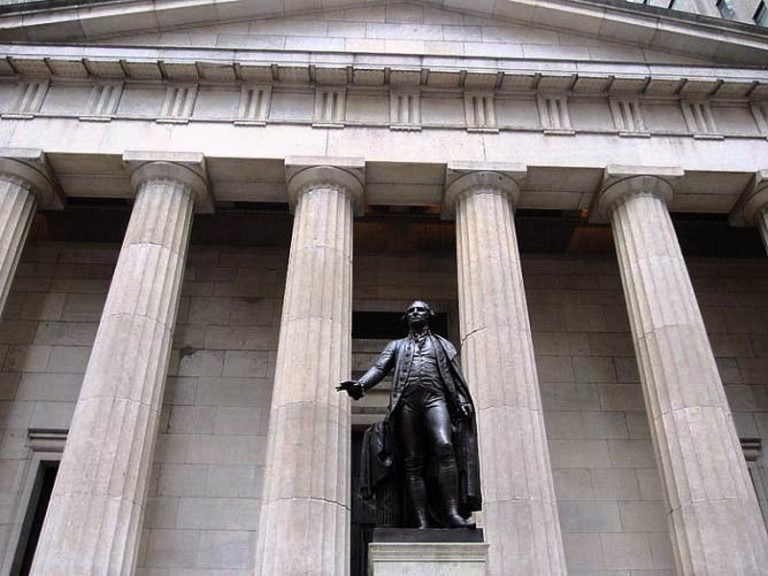 George Washington | © Another Believer/Wikicommons
America’s first President and Founding Father, George Washington, is immortalized by this bronze statue located on the steps in front of Federal Hall in the Financial District of Downtown Manhattan. The statue was created by John Quincy Adams Ward in 1883 in commemoration of Washington’s first inauguration as President in 1789. At that time, Federal Hall was the seat of the nation’s first government while New York City was the first capital city of the newly formed United States after the colonists met in nearby Philadelphia to declare independence from Great Britain.
Open In Google Maps
New York City, New York, USA
Give us feedback 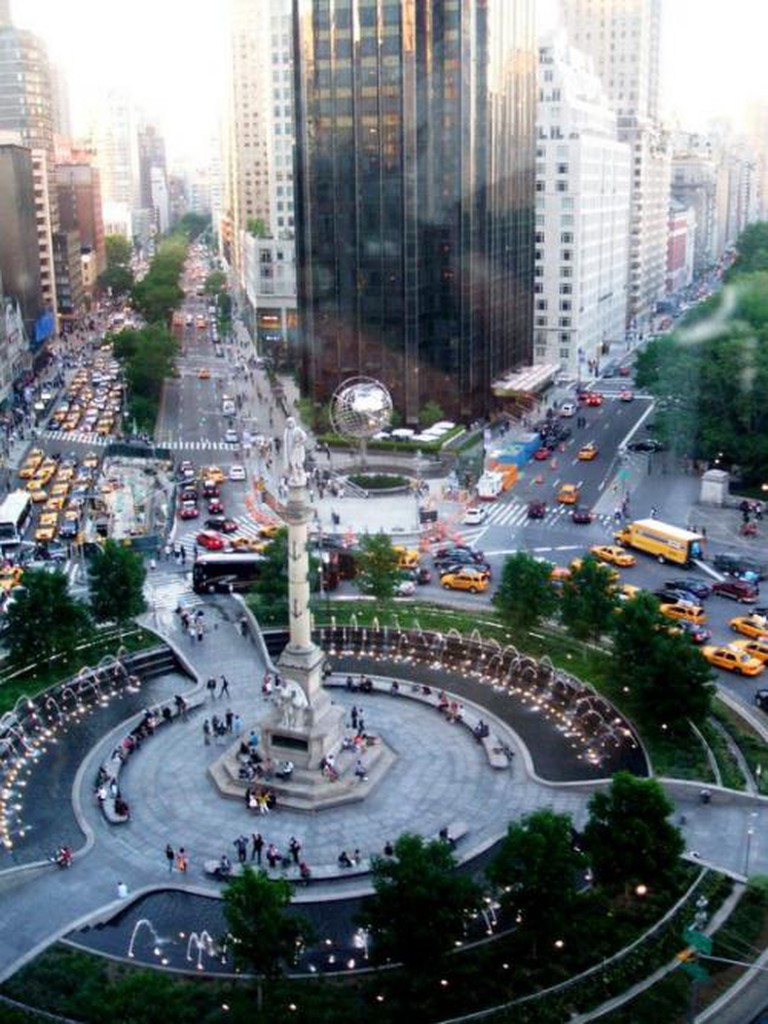 Christopher Columbus courtesy of Wiki Commons
At the south-western corner of Central Park South is “kilometer zero” – the point from which all official distances in NYC are measured. At the center of Columbus Circle and 59th Street stands Christopher Columbus atop a giant column. The monument was created in 1892 by the Italian sculptor Gaetano Russo and erected for the 400th anniversary of Christopher Columbus’ “discovery” of the Americas.
Open In Google Maps
New York City, New York, USA
Give us feedback 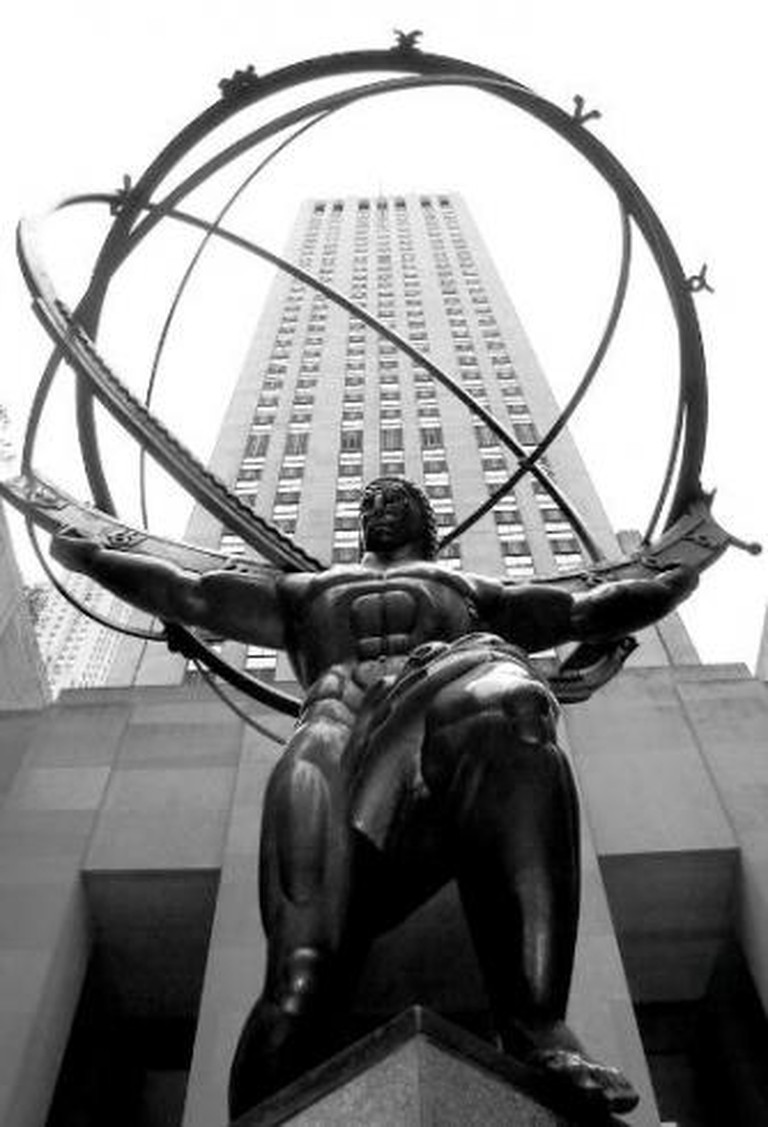 Atlas | @ Kristian Kafozov
Just in front of Rockefeller Center and across from Saint Patrick’s Cathedral is the famous bronze statue of Atlas. This Art Deco sculpture depicts a massive man “holding the heavens” on his back. The legend from Ancient Greek mythology was formed into a statue by Lee Lawrie in 1937. His sculpture has become a symbol of the objectivist movement and has been associated with Ayn Rand’s 1957 philosophical novel, Atlas Shrugged.
Open In Google Maps
45 Rockefeller Plaza, Manhattan New York, New York, 10111, USA
+12123326868
Give us feedback 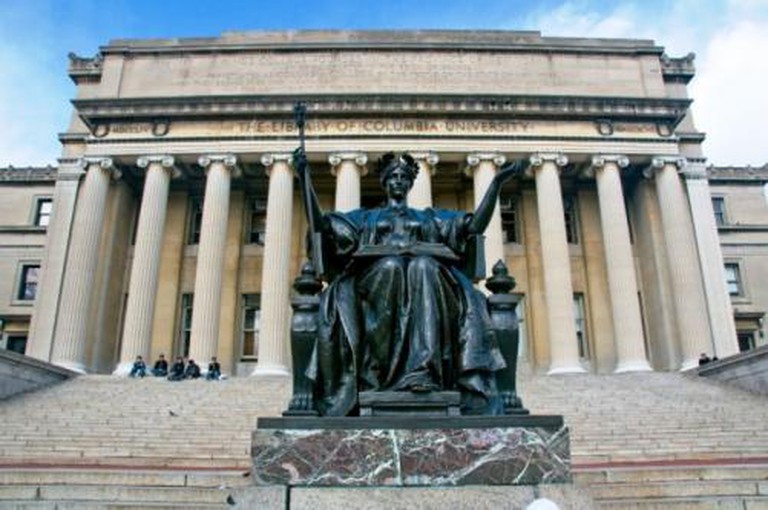 Alma Matter | Courtesy of the Public Domain from Panoramio.com
In the heart of the Columbia University campus sits Alma Mater,overlooking this historic Ivy League institute in Morningside Heights. This sculpture of the Greco-Roman goddess Athena was created by Daniel Chester French in 1904, situated on the steps leading to the Low Memorial Library as a symbol of the University. The statue is synonymous with the character of Columbia who is named after Columbus and has come to personify the USA. Also perceived be the same woman as Lady Liberty, this sculpture is a top attraction for academics and tourists alike in NYC.
Open In Google Maps
New York City, New York, USA
Give us feedback

Visiting Uptown Manhattan’s Morningside Heights neighborhood, you may notice a distinctively relaxed atmosphere characterized by parks and university buildings that make up its ‘academic acropolis’. The neighborhood is home to Columbia University as well as the famous Cathedral of Saint John the Divine. Located in the People’s Garden on West 111th Street is the Peace Fountain, constructed by Greg Watt in 1985 to celebrate the triumph of good over evil. Although it is associated with Christianity for its close proximity to the Cathedral, it is also surrounded by the Greek Socrates, Jewish Einstein, Hindu Gandhi, and Agnostic John Lennon, who is accompanied by a quote from the lyrics of his song ‘Imagine’. 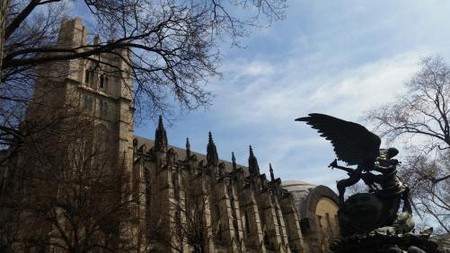 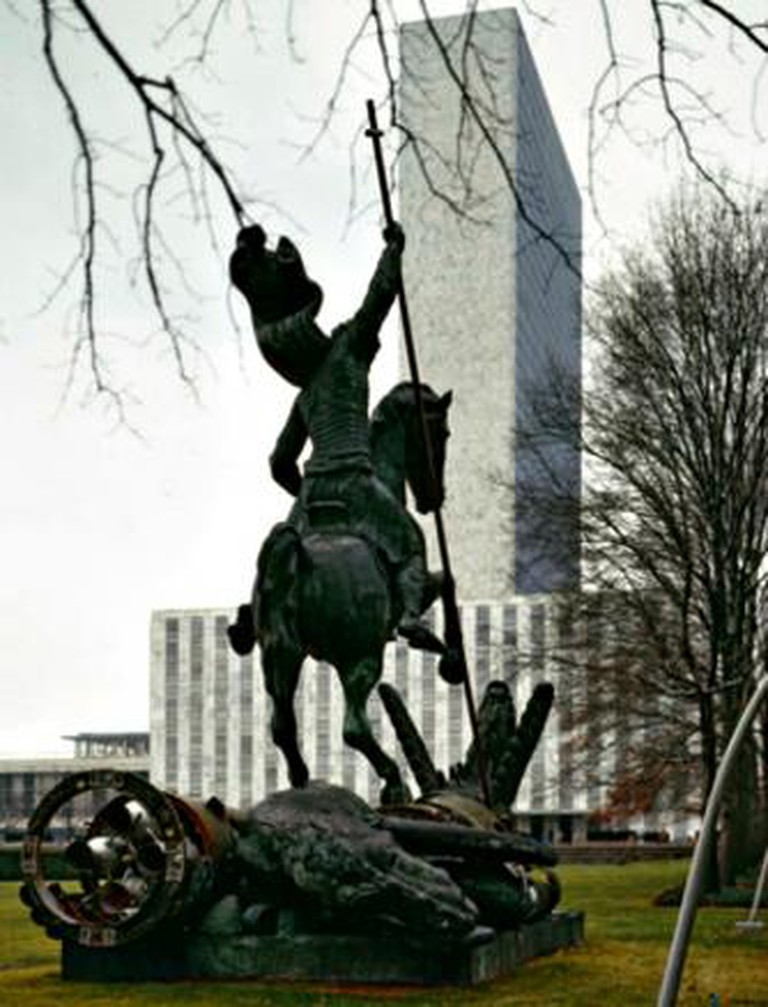 Good Defeats Evil | Courtesy of UN Multimedia
This apocalyptic-themed sculpture represents the triumph of man’s will to do good over evil, presented by the Soviet Union in 1990 on the occasion of the 45th anniversary of the founding of the United Nations. Zurab Tsereteli’s sculpture depicts Saint George the Dragon Slayer above a dragon created from fragments of Soviet SS-20 missiles and American Pershing nuclear missiles that were destroyed under the terms of the Intermediate-Range Nuclear Forces Treaty of 1987. This sculpture is found in front of the UN and has become an important symbol of nuclear disarmament.
Open In Google Maps
450 East 48th Street, Manhattan New York, New York, 10017, USA
Give us feedback 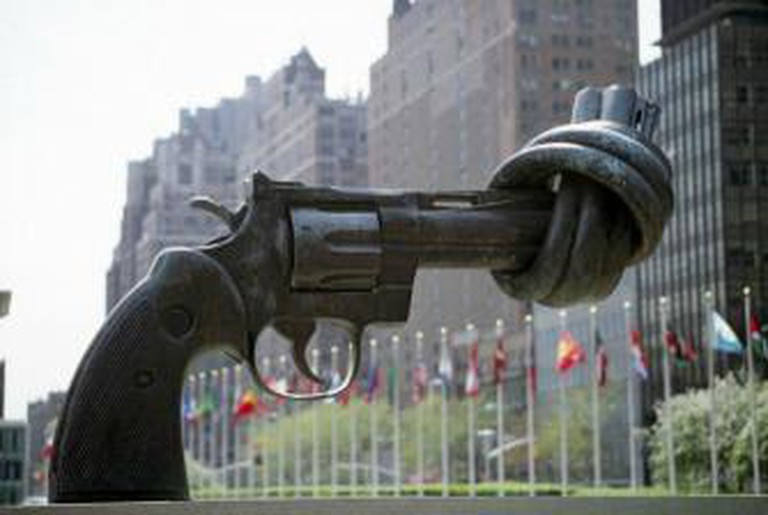 Non-Violence/ Knotted Gun | Courtesy of UN Multimedia
Inside the six blocks of UN-administered international territory on the East River are several eye-catching artworks, While waiting on line to enter the headquarters, you will see the Knotted Gun, a bronze sculpture of an oversized Colt Python 357 Magnum revolver with a knotted barrel and the muzzle pointing upwards. It was created by Swedish sculptor Carl Fredrik Reuterswärd in 1985 after the murder of singer, songwriter and peace activist John Lennon. There are currently 16 copies of Non-Violence throughout cities in Europe, Asia and Africa and it remains a famous global artistic symbol of world peace.
Open In Google Maps
New York City, New York, USA
Give us feedback

In the heart of Queens is a massive sculpture of the Unisphere, located in Flushing Meadows-Corona Park. This sculpture is a spherical steel representation of the Earth, which was commissioned to celebrate the beginning of the Space Age for the 1964-1965 World’s Fair in New York. The Unisphere officially represents the theme of global interdependence and was dedicated to “Man’s Achievements on a Shrinking Globe in an Expanding Universe.” However, it can also represent NYC as a multicultural microcosm of the nations of the world. 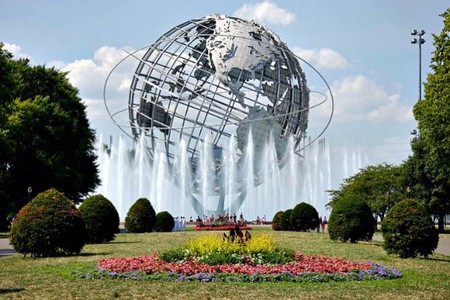 Unisphere | © Flapane/Wikicommons
Give us feedback