10 NYC Hip-Hop Albums You Should Know 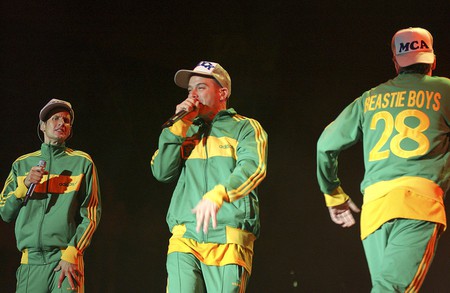 The Beastie Boys at Voodoo 2004 | © Nicholastbroussard/WikiCommons

In the early 1970s, a musical revolution occurred in the South Bronx. It was all party-oriented back then — DJs keeping dance beats and MCs pumping up the crowd. But this revolution was borne out in time to become the bastion of American musical innovation for the last quarter of the 20th century and through to today — hip hop. In the last century, New York was practically synonymous with hip hop, housing the leading artists of the genre’s golden age (from the mid 1980s to early ’90s), and the East Coast rap renaissance of the mid-1990s. And with the new Beast Coast movement, artists like Joey Bada$$ and The Flatbush Zombies are bringing the tradition back home.

Paid in Full is the epitome of old school hip-hop: a DJ/MC duo delivering funky beats, raps on how to ‘move the crowd’, and plenty of scratching. But it took that game to new heights. Rakim brought an unprecedented level of sophistication to his lyrics, particularly through a pioneering use of internal rhyme schemes. He delivers quick, complex rhymes with a tactical, measured flow, precisely fitting both the word and the beat. On top of that, pretty much all Rakim talks about is how good he is at rapping. And since he’s so good, you can’t help but spend the whole album nodding your head in agreement. Meanwhile, Eric B. is on the cut, revolutionizing the way producers layer samples to create music, and occasionally taking over with thrilling scratch-solos.

When two of the coming decade’s best lyricists join forces to make a politically-charged debut album, it requires a listen. When that album exhibits great musicality and an impressive stylistic range, it requires a spot on this list. Mos Def and Talib Kweli teamed up to do something truly different: create a socially-conscious and philosophically-nuanced hip-hop album. With the help of great hooks and Mos Def’s soulful voice, they produced an album that is electric and compelling with no gun bars, misogyny, or hate speech. Both have an uncanny ability to craft social-message lyrics that do not feel preachy, forced, or cheesy. And their ideas are truly deep — authentic philosophical meditations on a level that few other lyricists have achieved.

If you don’t listen to Slick Rick with a smile, you’re doing it wrong. As the most theatrical act on this list (which includes a Broadway musical), Slick Rick is a true hip-hop performer — spinning elaborate, humor-laden tales through effortless rhymes and soulful tunes. Rick’s simple rhyme schemes, singsong cadence, and colorful vocal inflections give his music a whimsical, cartoonish aesthetic. In this way, Slick Rick is like the Dr. Seuss of hip-hop, and Great Adventures is a storybook of his comical alter ego. Now, there is a troubling amount of off-handed misogyny in the album (don’t listen to ‘Indian Girl’ or ‘Treat Her Like a Prostitute’), but the notable songs that have aged so well demand a spot on this list.

No one can defeat the Wu-Tang sword style. Enter the Wu-Tang Clan is one half of the most glorious rap battle shellacking in history — the other half would be anyone who tries to stand up to the Wu, for no one could hold a candle against all nine members at the height of their powers. This album is the Avengers of rap music — a group of superheroes, each using their unique powers to create an entity with enduring strength. From ODB’s wild style to GZA’s linguistic density and the irresistibly satisfying quality of Method Man’s voice, every member provides an essential contribution to a larger whole. The masterful album is then neatly tied together through the theme of the Kung-Fu-clan, and supported by RZA‘s heavy beats and eerie film samples.

MF Doom is a genre of his own. But rather than marvel at all of the idiosyncrasies and innovations of the prolific British-born, NY-raised rapper/producer — eclectic sampling, sound-collage aesthetic, wiley humor, and reference-laden, pun-packed lyrics — let’s talk about the masterful concept of his greatest work. An anagram of MF Doom, MM.. FOOD revolves around food, from samples of cooking shows and mouth noises, to lyrics about beer and coco bread con queso. The theme of food is then tied in with the story of Doom, the ultimate rap villain, told through diverse and hilarious film and TV samples. MF Doom’s unique aural patchwork blends with his absurdist humor — like a hip-hop Frank Zappa — to create a fascinatingly unified work.

Anyone who doesn’t think Hamilton qualifies as a hip-hop album ought to read Questlove’s views on the matter and then consult Billboard’s Rap Albums chart, which the album topped. Hamilton is a sprawling, two-and-a-half hour hip-hop opera. Even aside from the political brilliance of its analogy between the founding fathers and contemporary victims of white oppression, the album is an enormous musical accomplishment. Miranda constructed wildly complex rhymes that are impeccably tied to the story, blended hip-hop-related genres for narrative effect, and seamlessly weaved tons of musical and lyrical motifs throughout the entire album. It is for all these reasons that Hamilton earns its spot as the best hip-hop album to have come out of New York over the past decade.

Paul’s Boutique may have been the first hip-hop album that forced you to actively listen. This is mostly credited to the work of the Dust Brothers — the album’s LA-based production duo. But the NY-based Beastie Boys are also responsible for the sound, and they embrace the Dust Brothers’ dense and eclectically sampled tracks, even incorporating samples into their rhyme schemes. It turns out to be the perfect companion to the Beastie Boys’ reference-heavy lyrics which they perform with a collage-like delivery. Even more, the album has a tendency to suspend the music’s rhythmic propulsion and take it in unexpected directions — creating a far more dynamic and artistically interesting listening experience. Look no further than their 12-minute, nine-part B-Boy stew that closes the album.

Illmatic is the most well-balanced hip-hop album ever made. Nas’ debut shocked the east coast rap scene. His lines were jam-packed with dazzling, multi-syllabic internal rhyme schemes (much like his idol, Rakim), truly profound poetry, and a sense of narrative focus. Arguably no other rapper has been able to weave together meaningful content with formal inventiveness as well as Nas does on Illmatic. Tasteful production choices give the album an iconic sound, like a soundtrack to Nas’ portrait of his city and upbringing. In the end, Illmatic is a hip-hop bildungsroman — a portrait of the artist’s childhood culture, and his maturation within it. And it is a masterpiece.

Biggie is the quintessential rapper of the people, and Ready to Die is his masterful portrait of his life. It is cinematic in essence — opening with the heartbeats of his birth, ending with those of his death, and sketching out his character and experiences with each track in between. And this cinematic agenda is perfectly suited by the album’s colorful, slickly-arranged samples. More important than all of this narrative depth and style, though, is the man himself. An effortlessly captivating lyricist with an electric flow, Biggie is 1990s east-coast-rap-style personified. His plosives pop like percussion, firing off rhymes in quick succession with an informal and wholly ‘in the pocket’ vibe. His is the expression of ’90s Brooklyn life, in all its honest glory.

It Takes a Nation of Millions to Hold Us Back (1988), Public Enemy

Not merely the greatest New York hip-hop album, Nation of Millions might be the greatest hip-hop album — full stop. This album was unprecedented on so many levels. Musically, it sampled more aggressively and experimentally than anything that had come before it. Rhythmically, Chuck D’s flow was faster, knottier, and punchier than any MC before him. And lyrically, the album was politically charged, talking about real issues and expressing the real feelings of righteous anger for black Americans of the time (and, importantly, still today). However, the beauty of Nation of Millions is that the whole adds up to something greater than the sum of its parts. Aggressive and dissonant samples combine with Chuck D’s rhythmic force and politically-charged lyrics to create a unified aural assault — an agit-rap manifesto.