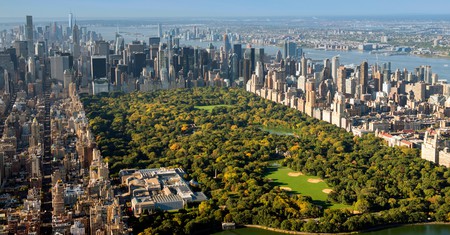 This guide breaks down some of the most frequented New York neighborhoods so you can experience the real New York and get a feel for how these enclaves flavor the city.

Boasting a population of over 8 million, New York City is one of the most popular places to drop anchor. But what’s it really like in the metropolis known as the Big Apple? From beatniks to Broadway, each neighborhood is rich in its own cultural history based on the people who work and play here, not to mention the nuanced landscape, architecture and attractions you’ll find in each hood.

In New York, one of the most walkable cities on the planet, you can get from one neighborhood to another on foot or by hopping on the super accessible New York City subway system if you don’t feel like hailing a taxi. The following will help you catch the vibe of these much-frequented and beloved New York neighborhoods, no matter how you plan to traverse the city. Before you know it, you’ll be so savvy when it comes to New York, you just might be mistaken for a local. 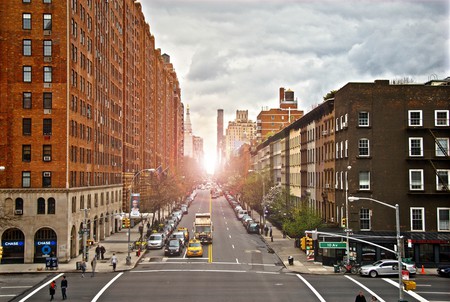 What was once a hub of industry has become one of Manhattan’s most cultivated cultural havens. On the west side of downtown Manhattan, Chelsea remains a swanky neighborhood for its proximity to the popular High Line, an elevated outdoor attraction with spectacular views and intriguing historical background. Chelsea also encompasses the seriously chic Meatpacking District, where you’ll find luxury shopping, fine dining and posh nightlife. Most known for its concentration of art galleries, Chelsea is a super walkable hood and home to New York’s contemporary art scene. Other neighborhood attractions include Chelsea Market, an upscale food court that sells artisanal and small-batch offerings as well as produce from New York’s upstate farm region. Also find Chelsea Piers, a sports and entertainment arena that boasts laser tag, a skateboard park, bowling, swimming, golf and more. Chelsea, New York, USA 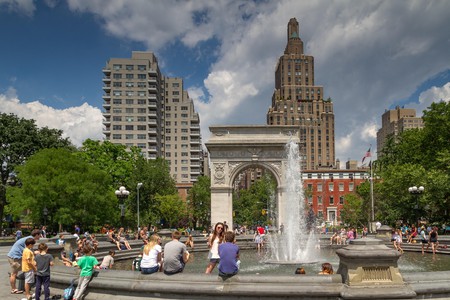 Brownstones and bars line the streets of Greenwich Village, known as the center of New York’s bohemian movement in the 1960s. This neighborhood is brimming with music and literary history and was a pioneering enclave for gay rights in the 1970s and ’80s. Today, the culture of one of its most famous thoroughfares, Bleecker Street, epitomizes the melange of trendy shopping, delectable dining and iconic nightlife that makes Greenwich Village one of New York’s most vibrant hoods. Greek Revival townhouses and hidden alleys add to the charming character of the landscape architecture, while Washington Square Park remains a social hub with historic roots. Greenwich Village, New York, USA 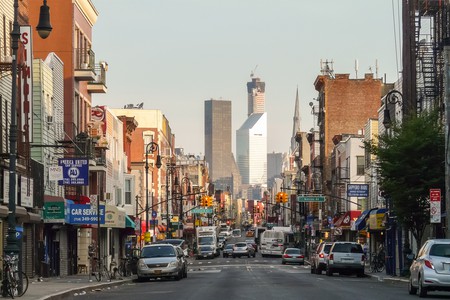 Greenpoint’s Manhattan Avenue leads towards – but not to – Manhattan’s skyscrapers; the East River lies in between | © WitGorski / Shutterstock 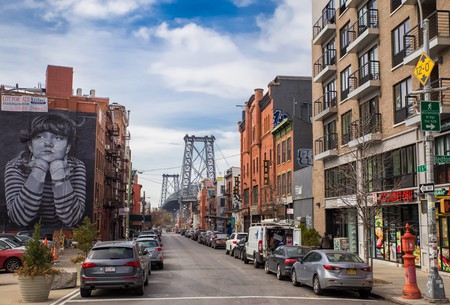 Home to some of the city’s trendiest nightlife, art, shopping and dining as well as providing excellent views, Williamsburg combines nouveau real estate with the hippest in youth culture. What started out as an artists’ enclave has turned into the city’s latest endeavor for waterfront real estate development, although you still might find an industrial loft apartment standing amid the swank luxury condominiums. Boozy brunches, offbeat thrift stores and clubs that boast internationally known DJs and dance parties keep the neighborhood replete with the young and trendy, while parks and art attractions round out the neighborhood’s culture. Known internationally for its cutting-edge fashion sense, Williamsburg is a place where anything goes, and its street style embodies the neighborhood’s laissez-faire attitude. Williamsburg, New York, USA 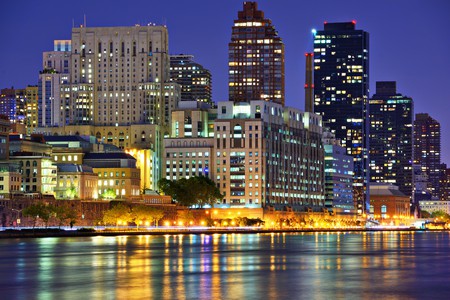 The Upper East Side is the embodiment of haute Manhattan culture, with borders along Central Park, the city’s most extensive and ornate park; Fifth Avenue, a stretch of luxury shopping; and the historic East River. The area, which comprises smaller neighborhoods like Carnegie Hill, Lenox Hill and Yorkville, extends from 59th Street to 96th Street. Beaux Arts mansions that date back to the 19th century as well as French Renaissance-style townhouses characterize the architecture, along with luxury condominiums and homes of international tycoons. North of Grand Army Plaza at the southeast corner of Central Park, you’ll find Museum Mile, home to some of New York’s most famous museums. In addition to five-star hotels, fine dining and high-end shopping experiences, find elite private schools, breathtakingly historic homes and industry leaders who set the bar for New York glamour and glitz. Upper East Side, New York, USA 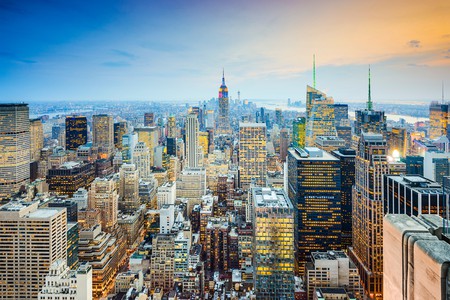 Midtown Manhattan, or the area between 31st Street and 59th Street, is peopled by hoards of tourists and office folks on the grind, so it tends to be crowded most of the day. But the neighborhood is also home to New York landmarks like the Empire State Building, the Chrysler Building, the headquarters of the United Nations, Rockefeller Center and Times Square, which explains the throngs of people. Nestled in the midst of all this fast-paced industry is the city’s famed theatre district, also known as Broadway. Fine dining experiences and luxury hotels help make Midtown a destination worth visiting despite its densely populated avenues. Midtown, New York, USA 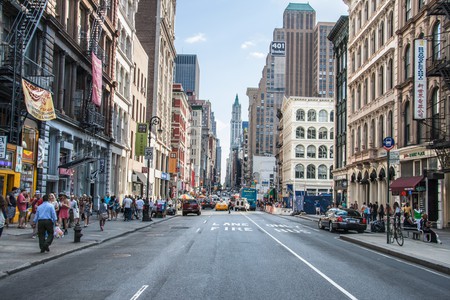 Broadway, north of Canal Street in SoHo, is home to many trendy shops and restaurants | © Bruno Ferrari / Shutterstock

SoHo is for the boho-chic, the fashion-forward and the in-the-know New Yorker. What used to be the most popular artist hangout spot back in the 1960s and ’70s has turned into the fashion capital of the city. Its popularity has seen up-and-coming artists out and brought celebrities in with proper NYC rent prices. However, you can still find New Yorkers shopping at the newest boutiques, drinking espressos in small cafés and gossiping at some of the city’s best bars and restaurants. SoHo, New York, USA 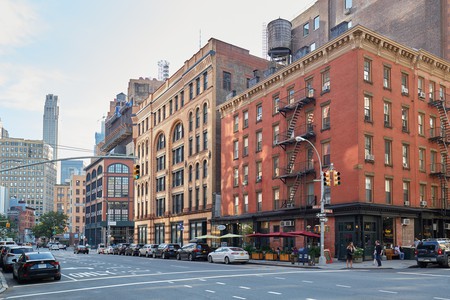 Industrial loft apartments, cobblestone streets and waterfront views define the landscape of Tribeca, a neighborhood known for art, fine dining and trendy shopping as well as being the hub of fashion and film events. The neighborhood known as the “triangle below Canal Street” also includes green outdoor recreational spaces like Hudson River Park and Washington Market Park. Home to the Tribeca Film Festival, a yearly event held in the spring, as well as recent host to New York Fashion Week, Tribeca has been reinvigorated after the 9/11 attacks, which devastated Lower Manhattan at ground zero. You’ll also find the 9/11 Memorial Museum in proximity to this neighborhood. Tribeca, New York, USA 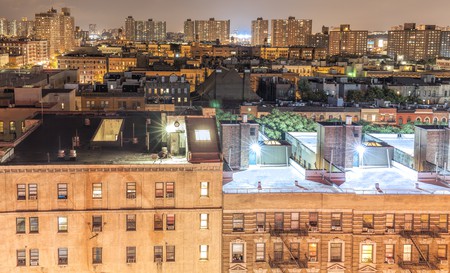 No NYC neighborhood has a richer cultural history than Harlem, seen here at night | © Maciej Bledowski

Harlem is world-famous for being a hub of African American heritage, and the neighborhood’s jazz clubs, soul-food restaurants and the iconic Apollo Theater remain as cultural testaments. Bordered by the Harlem River and the East River, the neighborhood occupies Upper Manhattan from about 96th Street to 155th Street. You’ll find several parks including Morningside Park, Jackie Robinson Park, Marcus Garvey Park and St Nicholas Park, each with its own stretches of greenery, as well as farmer’s markets, playgrounds, pools and other outdoor recreation activities. Brownstones and townhouses predominate, as do newly developed luxury apartment buildings that speak to the hood’s recent gentrification. Shopping is centralized along 125th Street, where you’ll find a melange of mom-and-pop shops as well as department stores and tons of fine dining. Harlem, New York, USA