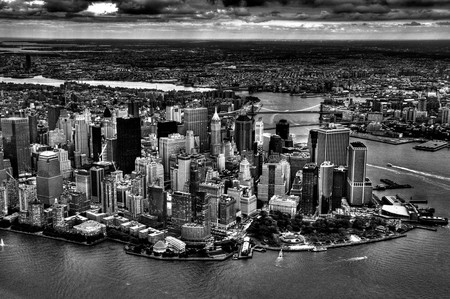 The most interesting people in the world often make New York City their home, so it’s no wonder that cinema frequently centers on famous people who are also New Yorkers. We look at ten must-see biographical films that feature the lives and exploits of a variety of notable, and often notorious, New York City residents.

With the country slowly recovering from the aftermath of the 2007 financial collapse, the film industry has latched onto Wall Street as an ideal movie location, ripe with plenty of essential dramatic elements —especially corruption, avarice, debauchery, and unchecked greed. The Big Short proves that sometimes even the probable good guys exhibit little to no conscience when it comes to robbing people blind. After eight fund managers and market analysts unravel the inevitability of a massive real estate collapse, they bet on the disaster rather than exposing it — ultimately earning millions of dollars for themselves and for their small groups of investors. The Big Short boasts a stellar cast, including Christian Bale, Steve Carell, Ryan Gosling, Brad Pitt, Marisa Tomei, and Melissa Leo.

In 1974, high wire artist Philippe Petit traversed the distance between the two 1360-foot World Trade Center towers via tightrope. The unauthorized performance, eight years in the making, garnered the Frenchman-turned-New Yorker much notoriety — but also got him arrested, though the charges were later dropped. The Walk, shot in IMAX 3D, offers dizzyingly gorgeous panoramas of the pre-9/11 skyline, largely from the perspective of a razor thin high-wire installed by Petit and his crew of motley helpers, secretly conjoining the Twin Towers a quarter mile above ground. Actor Joseph-Gordon Levitt convincingly channels the determination and skill of Petit, against the backdrop of Robert Zemeckis’ brilliant and acrophobia-inducing direction.

Actor, director, and co-writer Don Cheadle uses the late 1970s as the starting point for his current biopic about Miles Davis, opening the film with the jazz legend languishing in his Manhattan penthouse, a victim of serious drug addiction. But a chance glimpse of one of his old album covers sends the ailing Davis into a flashback to the 1950s. Cheadle’s tour-du-force performance in Miles Ahead perfectly captures the late jazzman’s raspy voice and unique mannerisms, and it includes a series of convincingly appropriate live performance scenes that wisely feature actual Miles Davis recordings, rather than opting for musical recreations. In an interesting twist, Ewan McGregor co-stars as a fake reporter purporting to be writing a feature story about Davis for Rolling Stone magazine.

On its surface, Pollock purports to recount the life and death of the pioneering abstract expressionist painter Jackson Pollock. However, at its core, it is primarily a love story — the tragic love story of a tormented alcoholic and the woman who not only loves him, but cares for him, protects him, advocates tirelessly for his artwork, and sacrifices her own promising art career in the interest of nurturing Pollock’s genius. In other words, it is as much an account of the dedicated perseverance of artist-in-her-own-right Lee Krasner as it is a tragedy about her volatile, reclusive, and always unpredictable husband, Jackson Pollock. The movie features veteran actors Ed Harris and Marcia Gay Harden, supported by Val Kilmer, John Heard, and Amy Madigan.

Edward R. Murrow is generally regarded as one of the greatest broadcast journalists of all time. His 20-year career in both radio and television news reporting is most famously remembered for the See It Now television series and its 1954 special broadcast, ‘A Report on Senator Joseph McCarthy,’ which called into question the radical accusations of the House Un-American Activities Committee. Good Night, and Good Luck concentrates on this particular period of Murrow’s career, but it is also a movie about the entire New York-based CBS News staff. The film uses actual news footage of Senator McCarthy and was shot in black and white in order to augment the film’s strong sense of authenticity. The cast includes Jeff Daniels, Davis Strathairn, Robert Downey, Jr., George Clooney, Frank Langella, and Patricia Clarkson.

A Guide to Recognizing Your Saints (2006)

Likely the best New York City-based biopic you have never heard of, A Guide to Recognizing Your Saints is based on a memoir of the same name written by film director Dito Monteil, who also wrote and directed the film. The stellar cast includes Shia LeBeouf, Robert Downing, Jr., Dianne Weist, Channing Tatum, Eric Roberts, and Chazz Palminteri, among others. A Guide to Recognizing Your Saints, which graphically chronicles growing up rough and tumble in Astoria, Queens during the 1980s, is gritty, honest, and as real as it gets without actually having been there and walking alongside the young Dito and his rowdy friends.

At the heart of New York City’s glamorous image lies the fashion industry, and no film better captures fashion’s cannibalistic nature than The Devil Wears Prada, loosely based on the life of legendary Vogue Editor-in-Chief, Anna Wintour. Academy Award winner Meryl Streep, in one of her most noteworthy performances, captures perfectly the dehumanizing perils of full immersion in the business of vanity. The stellar cast is rounded out with Oscar winner Anne Hathaway as the editor’s newcomer assistant, along with Stanley Tucci and Emily Blunt as her skeptical co-workers.

Before it was a hit Broadway musical, the premiere of the original movie version of Newsies, largely yawned off by critics, proved to be a box office disappointment. However, once released on home video, the film rightfully gathered a large and enthusiastic cult following. The story is loosely based on Maurice Cohen and Louis ‘Kid Blank’ Ballat, two enterprising newspaper boys who, back in 1899, headed up a largely successful labor strike against newspaper moguls Joseph Pulitzer and William Randolph Hearst. Featuring music by Alan Menken and J.A.C. Redman, along with the athletic choreography of Kenny Ortega, Newsies is an outstanding dramatic musical, made all the more appealing by virtue of the considerable talents of actors Christian Bale, Robert Duvall, and Ann-Margaret.

Make no mistake, Man on the Moon is not a funny movie, but it is instead a dramatic biopic about Andy Kaufman, a tragic figure who also happened to be a highly controversial comedian. Actor and popular funnyman Jim Carrey earned a Golden Globe for his disturbingly accurate portrayal of the troubled comic. Also featuring Danny DeVito, Courtney Love, and Paul Giamatti, this squirm-in-your-seat film was helmed by the veteran director Milos Forman.