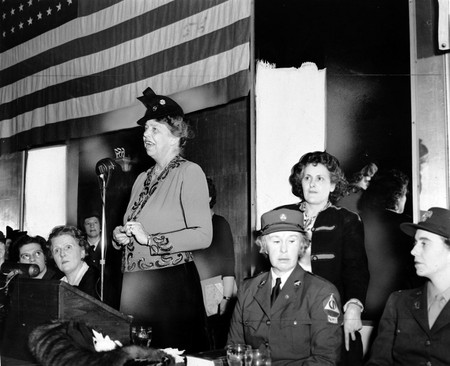 Eleanor Roosevelt speaks to a war-time audience while Rose Pesotta and others listen. | © Kheel Center/Flickr

Women’s History Month is in full swing! In celebration, we give you a short list of ten prominent, powerful, and influential New York women, both past and present. These incredible women have not only shaped history, but have paved the way for women today.

Eleanor Roosevelt was undoubtedly one of the most iconic and inspirational women in American history. First Lady to the United States and the wife of President Franklin D. Roosevelt, Eleanor Roosevelt was deeply involved in issues regarding human rights, women’s rights, children’s causes, and poverty. She had her own newspaper column titled ‘My Day’, where she discussed major social and political issues and events. Even after she and FDR left the White House, Eleanor Roosevelt continued her work with social justice, and became chair of the UN’s Human Rights Commission, where she helped write the Universal Declaration of Human Rights.

Dubbed the ‘First Lady of American Journalism’, Dorothy Thompson was a powerful inspiration to subsequent female journalists. Thompson was a strong proponent of women’s rights, and gave several speeches on women’s suffrage. She began her career by making her way to Vienna as a foreign correspondent during World War I. She then went on to become the Bureau Chief of the New York Evening Post. In 1936, she started her own column, ‘On the Record’, which was read by millions. Throughout her career, Thompson vehemently spoke out against Hitler and his reign of terror, urging the world to stand up and fight against him.

Born in the South Bronx to Puerto Rican parents, Sonia Sotomayor grew up idealizing law through the television show Perry Mason. From a young age, she new that she wanted to be a judge. In 1980, she graduated from Yale Law, passed the bar, and worked her way up the ladder by working litigation cases in a private practice. She was also a board member of the Puerto Rican Legal Defense and Education Fund, the New York City Campaign Finance Board, and the State of New York Mortgage Agency. In 1992, she became a U.S. District Judge, and in 2009 she became the first Latina Supreme Court Justice.

Dorothy Parker was a beloved journalist, civil rights activist, poet, and storyteller. Born in 1893, she grew up on Manhattan’s Upper West Side. Despite her tragic childhood, she sold her first poem at 14, and went on to become an editor at Vogue at the age of 22 before working at Vanity Fair. In the 1920s, she founded famed literary circle the Algonquin Round Table, a highly intellectual group that was well-known for their quick wit and sharp tongues. In the 1940s she moved to Hollywood to become a screenwriter, where she wrote screenplays like A Star is Born. She was ultimately blacklisted in the Hollywood community for her suspected involvement with Communist Party. Her famous works include Enough Rope, Here Lies, and her play, Close Harmony. 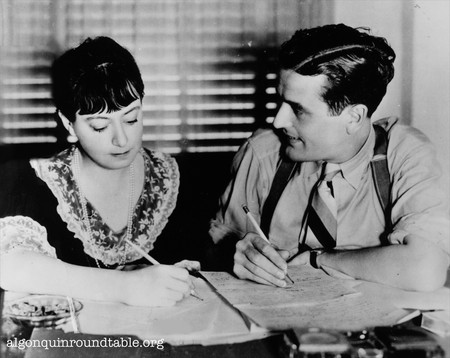 Before becoming the first African American Congresswoman in 1968, Shirley Chisholm received her Master’s from Columbia University and became a teacher. An avid supporter of children’s rights, she served as an educational consultant in New York City’s Bureau of Child Welfare. She went on to serve seven terms in the House of Representatives, and made further history as the first African American woman to run for the Democratic nomination in 1972. 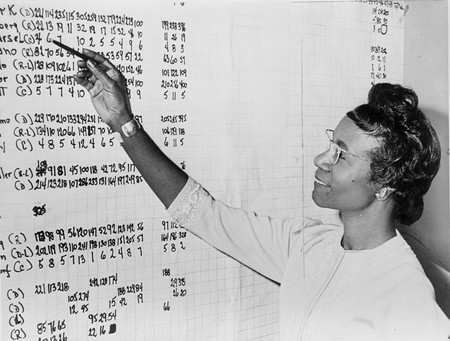 It’s safe to say that Grace Hopper has accomplished a lot in her 85 years. She studied math and physics at Vassar College, and received her Master’s in Mathematics from Yale University. While later teaching at Vassar, she became one of the first women to receive a Ph.D. in Mathematics. When World War II hit, Hopper joined the U.S. Naval Reserve, where she became Lieutenant in 1944. She learned to program a Mark 1 computer, and worked with Mark 2 and Mark 3 computers. In 1952, she and her team created the first computer language, and at age of 60, she was called back to duty to create a common computer language for the public. She became Rear Admiral before retiring in 1986.

While not much is known about Mary Edmonia’s early life, it is said that she was the first African American and Native American sculptor. She attended Oberlin College where she discovered her talent for drawing. After being accused of poisoning two white students, she was captured and beaten by a mob. She managed to flee to Boston, when the charges against her were dropped. It was there that she met Edward A. Brackett, who mentored her in the art of sculpting. After creating a bust of Colonel Robert Shaw, she received enough funds to sail to Rome, where her fame grew exponentially. Her artistic themes revolved around religion, but she also created busts of American leaders.

A trailblazer for women in aviation, Eileen Collins was the first woman to pilot a space shuttle mission. Her pilot training took place at Oklahoma‘s Vance Air Force Base, where she was one of the only women in attendance. Several years after receiving her pilot’s license, she flew cargo planes for military and humanitarian efforts. She made history in 1995 on the shuttle Discovery, as the first woman to pilot a shuttle. In 1999, she became NASA’s first female shuttle commander for the Colombia. She has been listed in the Encyclopedia Britannica as one of 300 Women Who Changed the World, and has been inducted into the National Women’s Hall of Fame. 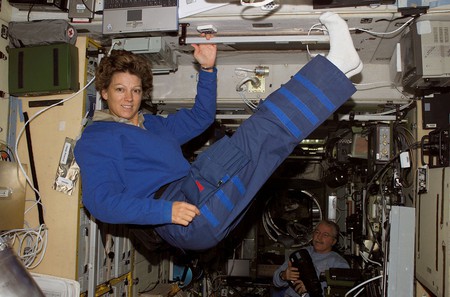 Debi Thomas discovered her love for the ice at age five. By the time she was ten, she was already training under Alex McGowan, who coached her to the Olympics, where she became the first African American to win a non-novice title in the U.S. Figure Skating Championships. In 1988, she brought home the bronze medal, becoming the first African American to win a medal in any winter sport. She retired in 1992 to attend medical school, later becoming an orthopedic surgeon. In 2000, she was inducted to the U.S. Figure Skating Hall of Fame.

When Lady Gaga emerged onto the scene, she became quickly recognizable for her catchy pop music and rather unconventional aesthetic. Today, Lady Gaga is one of the world’s most notable celebrities, having found major success in both the television and music industries. In 2014, she dabbled in jazz with Tony Bennett, moving away from her traditional sound. She performed ‘Til It Happens to You’ at the 88th Annual Academy Awards – a song featured in the 2015 documentary The Hunting Ground, which dove into issues of sexual assault and rape on college campuses. Aside from her success as a performer, Lady Gaga has been a powerful advocate of gay and women’s rights, using her stardom as a means of speaking out for the voiceless. 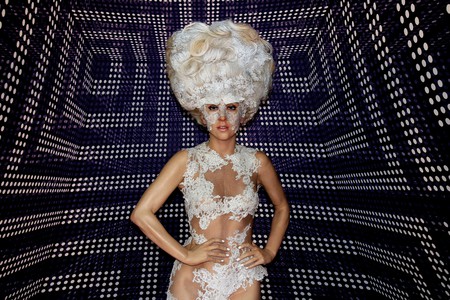 Rachelle is currently a senior at St. John’s University, pursuing a degree in Journalism. She hopes to be able to stay in the city and go to grad school. In her spare time, she enjoys taking random trips to Manhattan and Brooklyn, trying new restaurants, and watching Netflix.