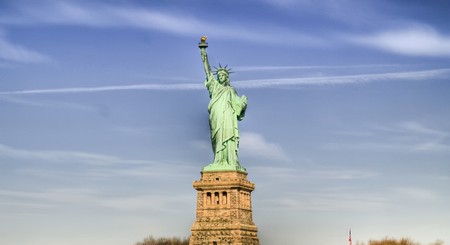 With all of the hustle and bustle involved with navigating New York City, it’s easy to overlook the many points of historic beauty that line streets and dot parks. Statues and monuments can be found all over NYC, from huge landmarks such as the Columbus Circle monument to the picturesque sculptures that line 5th Avenue on the Upper East Side. Here are our top picks. 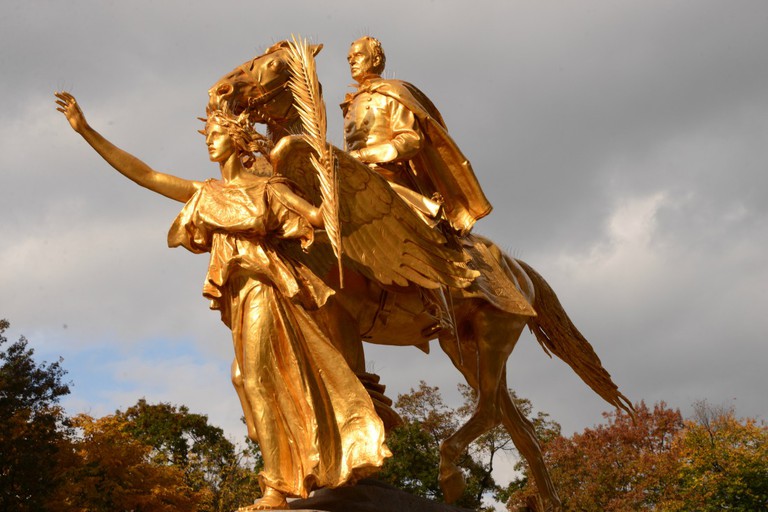 General Sherman Statue Central Park | Courtesy of the Central Park Conservancy
Riding valiantly on his trusted steed, William Tecumseh Sherman is immortalized in gold leaf at the Grand Army Plaza. New York City-based sculptor Augustus St. Gaudens created this magnificent work to commemorate the Civil War hero in 1903. The piece was constructed in two major cities: New York and Paris. General Sherman sits confidently atop his horse, while the personification of peace guides his path. Over the years, the Central Park Conservancy has worked tirelessly to preserve the monument, adding gold leaf back to the statue and coating it with protective pigmented waxes. 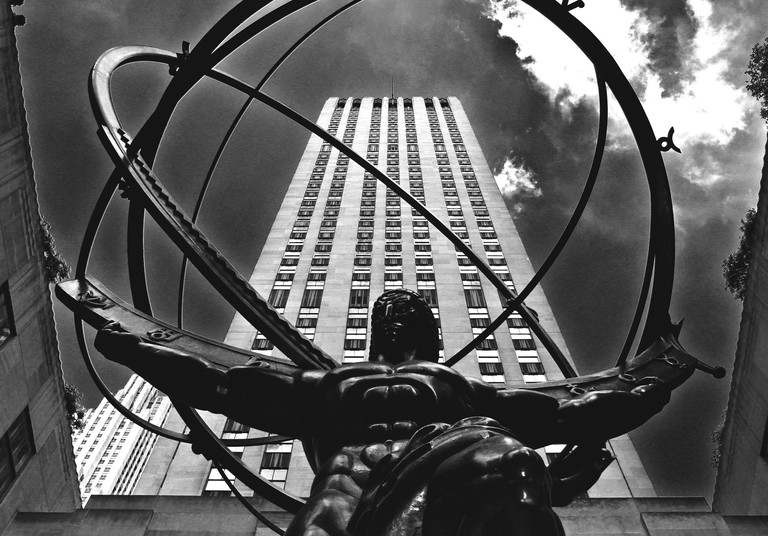 Atlas | © Je suis Eli/Flickr
Standing 45 feet tall in front of Rockefeller Center, the Titan Atlas can be seen carrying the weight of the world. As the Greek myth goes, carrying the world on his shoulders was his eternal punishment for revolting against the Olympian gods. The bronze statue of this demigod was a collaborative project by Lee Lawrie and Rene Paul Chambellan in 1937. Lawrie envisaged and designed the art deco statue, while Chambellan modeled for the sketch. Atlas is one of many works of art that can be found at Rockefeller Center. 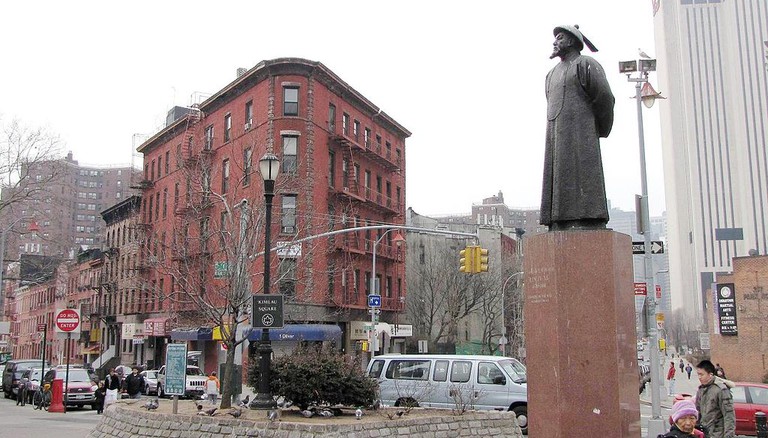 Ling Caik-su | © LuHungnguong/WikiCommons
Lin Zexu has been a Chinatown star for almost two decades with his statue overlooking Chatham Square (also referred to as Kimlau Square) in Chinatown since 1997. The Fujian Qing Dynasty official stands on a pedestal with the inscription ‘Say No to Drugs’ in both English and Chinese. Perhaps this appears unconventional at first glance; however, it makes perfect sense given Zexu’s reign. Lin Zexu banned opium in China, kickstarting the 19th century’s Opium War. His monument was sculpted by Li Wei-Si. 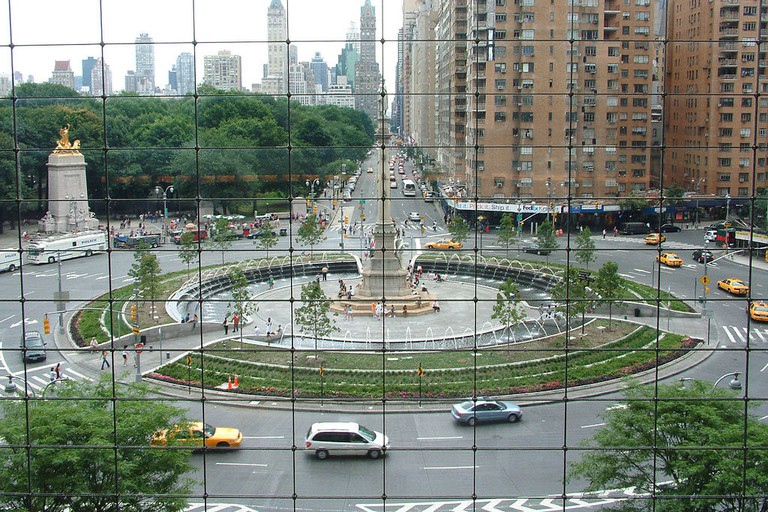 ColumbusCirclefromTimeWarnerCenterNYC20050807 | © Choster/WikiCommons
Marking the epicenter of Columbus Circle at 59th Street is a 76-foot-tall monument to the notorious explorer Christopher Columbus, who ‘sailed the ocean blue’ in 1492. Columbus stands tall at the very top of a pedestal that overlooks a roundabout below, just at the foot of Central Park South. At the bottom of the monument stands the Genius of Exploration: a male angel scanning a globe. This Carrara marble monument was sculpted by Gaetano Russo, and it was erected in 1892 to honor the 400th anniversary of Columbus’s trip to the New World. Of course, this work wouldn’t be complete without Columbus’s famous ships: the Niña, Pinta, and Santa María, all of which are sculpted at the base of the monument. It is accompanied by a piece depicting Columbus and his men walking onto their ‘newly discovered’ soil. 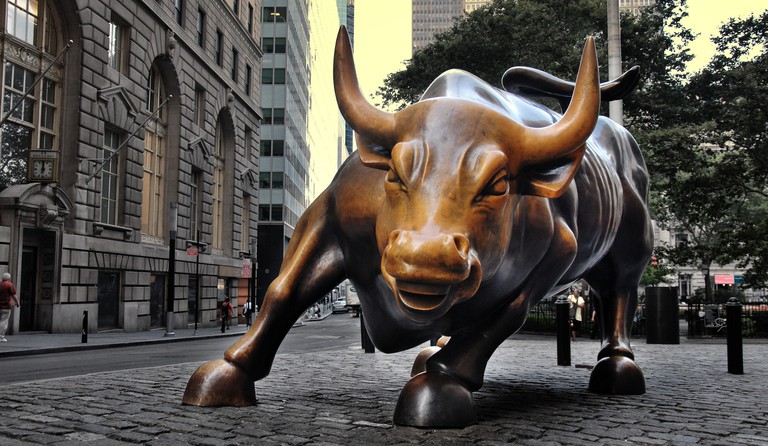 Charging Bull - New York City | © Sam valadi/Flickr
This iconic bronze sculpture is also known as the Bowling Green Bull, located in the Manhattan Financial District. Created by Italian artist Arturo Di Modica, this piece serves as a symbol for the inhabitants of the area. Like a bull, America is determined to succeed and overcome obstacles, so this piece embodies the perseverance of New Yorkers. The sculpture was initially placed at the New York Stock Exchange on December 15, 1989 under the NYC Christmas Tree. It caused quite a stir, later being removed by the NYSE. The Charging Bull eventually found its permeant home at the Bowling Green.

The Joan of Arc Memorial 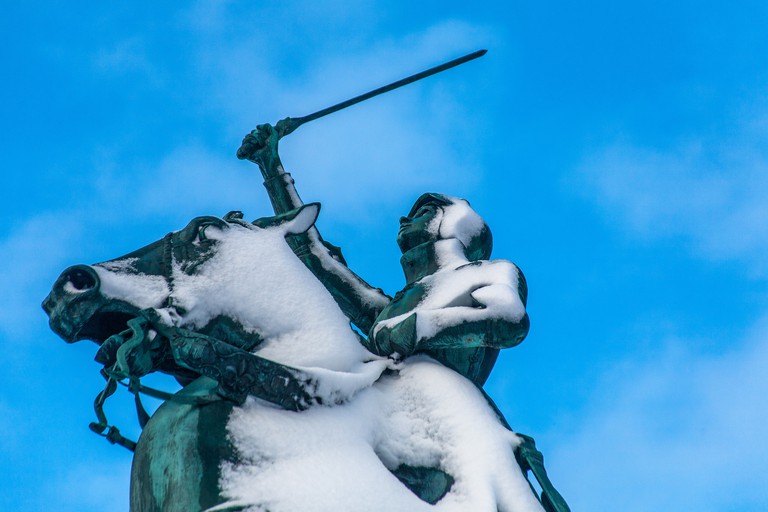 Joan of Arc Monument | © Paul VanDerWerf/Flickr
French heroine Jeanne La Pucelle (also known as Joan of Arc) is gallantly sculpted in bronze in Manhattan’s Riverside Park. Dressed in armor and equipped with a sword, Saint Joan rides her horse to freedom. The New York Joan of Arc Monument Committee, formed in 1909, commissioned young artist Anna Vaughn Hyatt Huntington to sculpt the piece. Joan of Arc sits on a John Van Pelt pedestal comprised of Mohegan granite and blocks of limestone from the tower in Rouen, France, where she was confined. Completed in 1909, this monument illustrates her determination and the legacy she left behind. 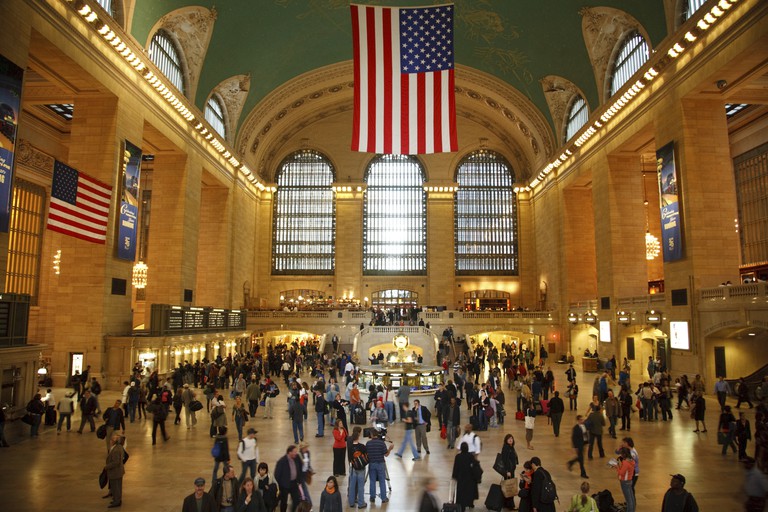 © Maciej Dakowicz / Alamy Stock Photo
This statue towers over the Grand Central Terminal entrance, and it’s easy to overlook as you rush to and from the station. It features Mercury in his winged hat to represent speed, Hercules representing strength, and Minerva representing wisdom. These figures watch over the thousands of commuters who enter and exit the station, daily. Just under Mercury is the largest Tiffany clock in the world, at 13 feet in diameter. This massive piece was designed by French sculptor Jules-Felix Coutan, and it took seven years to construct. To include a piece of Americana, Coutan installed a large eagle under Mercury. 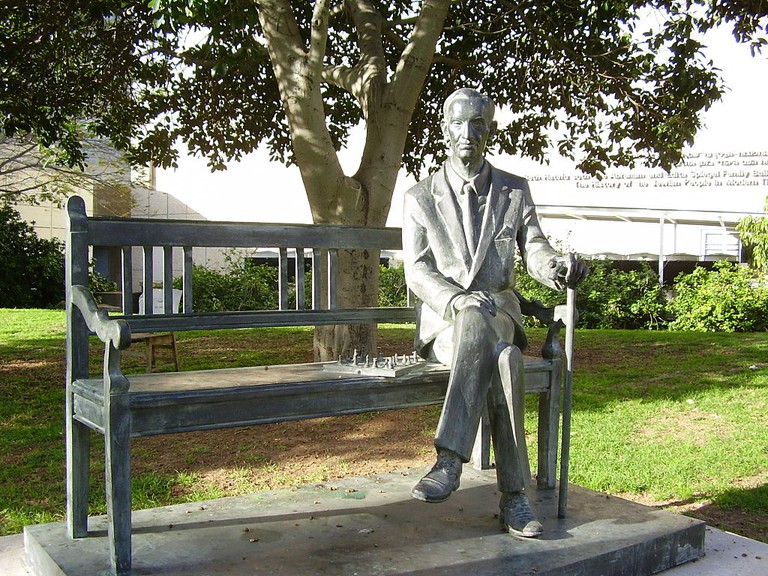 Jan Karski Statue in Tel Aviv University | © dr. avishai teicher User:Avi1111/WikiCommons
World War II warrior Jan Karski is eternally celebrated in Manhattan for his honorable actions. As a Polish liaison officer, Karski risked his life to inform the US about the Nazi concentration camps in Europe. Right outside of the Polish Consulate, Karski peacefully sits on a park bench with a cane in hand. As an expert chess player, it is only fitting that he is accompanied by a chess board. This monument was showcased in November 2007 on Poland’s Independence Day. The street on which he sits was renamed Jan Karski Corner. 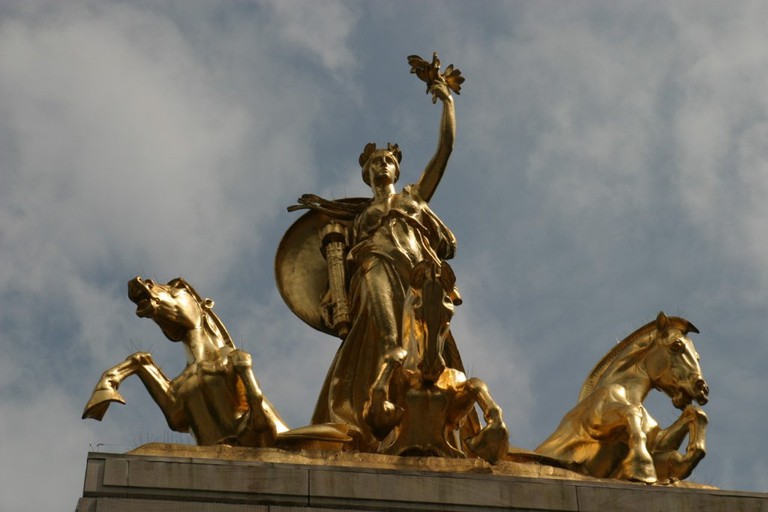 Maine Monument at Merchants' Gate of Central Park | © D_M_D/Flickr
Located at the south end of Central Park, the Maine Monument features Columbia Triumphant as she rides her seashell chariot led by three sea horses, symbolizing the naval strength of the USA. Sculpted by Attilio Piccirilli, it was cast in 1912 using metal from the USS Maine guns that had survived. At the base of the monument one can find marble statues representing Courage, Fortitude, Justice, Peace, and Victory, as well as the Atlantic and Pacific Ocean. Harold Van Buren Magonigle served as the architect behind the project. The entire monument is a memorial for the 260 American sailors who lost their lives in the 1898 USS Maine ship explosion in Cuba; their names can be found on the pylon.

Unofficially referred to as ‘Grant’s Tomb’, the General Grant National Memorial commemorates the 18th President of the United States, Ulysses S. Grant. The tomb is where Grant was laid to rest, and it was completed in 1897 in Riverside Park. The tomb and memorial have been under the management of the National Park Service since 1958, and this memorial remains a highly-visited New York City landmark today.