10 Emerging NYC Photographers You Should Know 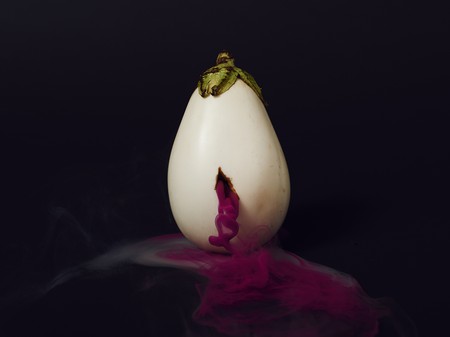 The Secret Lives of Fruits and Vegetables | © Maciek Jasik

New York City is considered an epicenter of art, mainly because it’s the source of so much life. It’s no surprise that photographers come from far and wide to find inspiration in this thrilling scene, and these extraordinary artists capture the character and personality of the city through models and objects. We profile ten contemporary NYC photographers you should know.

Alyssa Noda is originally from Tokyo, but now calls NYC her home. Her portraits are the antithesis of the city’s craziness: they are dreamy and ethereal. Her subtle colors convey a peacefulness that most New York City inhabitants rarely experience. A deep dive through her Instagram account will leave your craving the pockets of nature that New York residents look forward to stumbling upon, amongst the skyscrapers and alleyways.

Andrew Herzog describes himself as a ‘designer and thinker and human.’ The title of ‘thinker’ comes out loud and clear in this photographer’s work. His images are well thought-out, intelligent and even a bit snarky. They are often accompanied by quirky commentary on culture and his surroundings, which are equally amusing and thought-provoking, and which remind the viewer of the ever-present ‘human’ photographer.

Cindy Trinh is a New York-based photographer and photojournalist who seamlessly brings together art and social justice. Her images portraying Asian-Americans working in Chinatown personalize daily life, seeking to complicate stereotypes. Her widely popular blog, Activists of New York, draws attention to many of the socio-political conversations and demonstrations currently active in the city, by putting focus on the individuals involved.

On a Dreamy Summerjam | © Helga Traxler

Helga Traxler is originally from Linz, Austria, and has resided in New York City since 2012. Her work sits squarely in between fashion and art with color schemes, and on-trend graphic presentations playing an integral role to each image. Her images are fun and youthful, showcasing the individual beauty of her models and her own delightful personality and style. Her clients include The New York Times, Der Zeit, Dash Magazine, and so on, and she has been featured in solo and group shows in Austria, Portugal, the Czech Republic, and the USA.

Shelby Edwards and James Lee Whitney are the Brooklyn-based duo behind Little Drill. The tagline on their website, ‘Have Fun, Get Weird’ captures the essence of their imagery. Citing pop art, modern design, coastal cities and Saved By the Bell as their inspirations, it is clear how they came into their unique style. Vibrant graphics give their subject matter quirkiness, and their creative titles instantly bring a wide smile to the viewer.

The Secret Lives of Fruits and Vegetables | © Maciek Jasik

Born in Poland, Maciek Jasik has the unique ability to create beautiful mystical imagery. His portraits not only capture the complex beauty of his models but also, dare we say it: their souls. His series, ‘The Secret Lives of Fruits and Vegetables,’ show out-of-this-world depictions of simple everyday objects in a paranormal situations. Upon closer examination, they look almost as though they are coming to life before your very eyes. His clients include Refinery29, GQ, Wired, The New York Times, New York Magazine, and many more.

May Lin Le Goff has been a resident of NYC since 2010. Born in France and raised in Singapore, she moved to NYC to complete her BFA at the School of Visual Arts. These cultural influences have had a huge effect on her creative identity, and contributed to her deep appreciation of fashion imagery. The vibrant colors and impeccably styled models, juxtaposed with a unique level of disorder, make her images immediately identifiable and captivating.

It is hard to imagine Tara Rice as anything other than a photographer; growing up with a father who was a professional photographer and lab owner for almost 30 years, we see where she gets her talent. Tara refers to Brooklyn as home, but spends most of her time traveling to remote parts of the world photographing the wide range of cultures and people she encounters. Tara’s images allow the viewer to get a glimpse into a lifestyle unimaginable to most New Yorkers, as well as the unique personalities behind the models. Tara was recently included in Photo Boite’s ’30 Under 30 Women Photographers 2016,’ and you can see her work in Makeshift Magazine, Tiny Atlas, GOOD Magazine, and many more.

Will Ellis is a Brooklyn-based photographer, the author of Abandoned NYC, and the creator of AbandonedNYC.com. His passion for documenting urban environments has led him to discover some of the most amazing abandoned spaces throughout the five boroughs. His work provides some additional history of the space (for those history buffs out there). Will’s images show the buildings in a range of disarray, but allow the viewer to imagine what the space looked like in its heyday. Check out the Abandoned NYC website for great places to explore.

Ysa Pérez was born in Rochester, NY – the birthplace of Kodak. Since graduating from Rochester Institute of Technology she has promoted the use of film in her personal and commercial work, often choosing 35mm or 120mm over the standard digital camera. Her clients include American Apparel (where she is also a model), Adidas, Nylon, Bloomberg Businessweek, Steve Madden, and more.