Your Guide to Brooklyn's Park Slope in the Movies 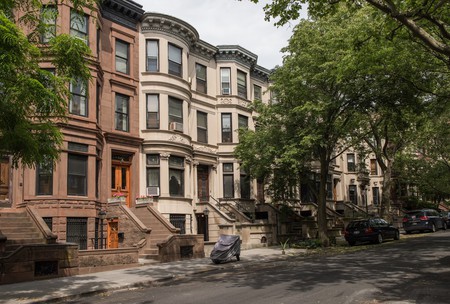 One of the most desirable neighborhoods in the country, architecturally rich Park Slope has appeared in numerous films and TV series.

With its historic brownstones, tree-lined streets, locally owned shops and family-friendly vibe, Park Slope sometimes feels like the setting for Sesame Street. But the picturesque Brooklyn neighborhood has served as the backdrop for an impressive array of movies that are definitely not geared to the pre-school set. They include films directed by John Huston, Francis Ford Coppola, and Martin Scorsese.

Colonized by Dutch farmers in the 17th century, Park Slope began to evolve as a residential community in the mid-1800s. By the late 1890s and early 20th century, the neighborhood’s many brownstones and limestones, Romanesque townhouses, and Victorian Gothic mansions attracted upper-class New Yorkers in search of an idyllic urban retreat. 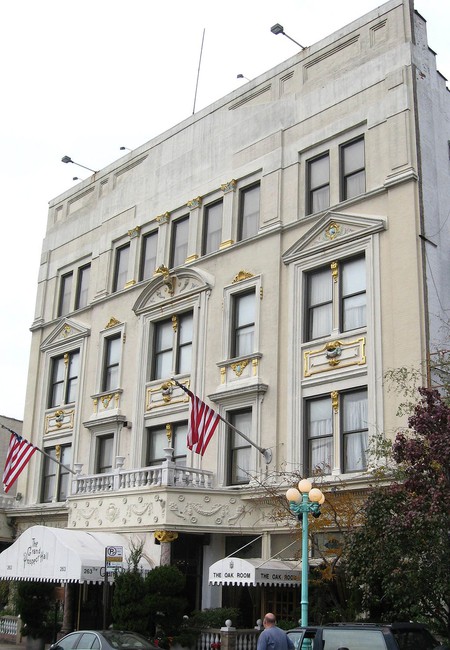 Nowadays, Park Slope, which is roughly bounded by Prospect Park to the east, 4th Avenue to the west, Flatbush Avenue to the north, and Prospect Expressway to the south, is home to professionals and their families who appreciate its small-town charm.

Since the neighborhood boasts the largest historic district in Brooklyn, film producers in search of old-time authenticity and architectural character gravitate there.

Grand Prospect Hall (263 Prospect Avenue), the Victorian banquet hall built in 1892 and reconstructed in 1900 following a fire, played a small part in the early days of motion pictures. In 1908, the Crescent Motion Picture Company began business in the ornate French Renaissance-style building.

Though the company shuttered when competitor Thomas Edison threatened legal action, Grand Prospect Hall continued to play a role in the entertainment industry. An early advertisement for the venue promised “high-class motion pictures and vaudeville.” The performers hosted by the hall over the years have included Mae West, Bob Hope, Ginger Rogers and Fred Astaire, and Lena Horne. 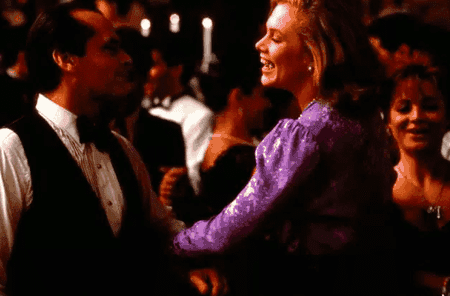 On film, the Grand Prospect Hall’s oak-paneled beer hall is the setting for the high-spirited night-club scene in Coppola’s The Cotton Club (1984), in which the tuxedo-clad Williams Brothers (Gregory Hines and Maurice Hines) wow the crowd with their singing and tap dancing along the maple parquet floors. 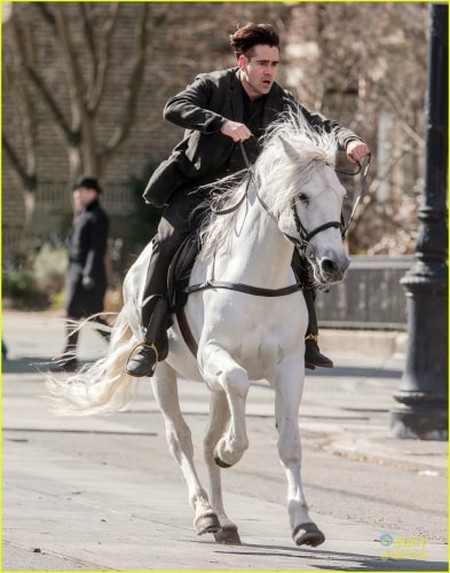 The house of Henry Herman (Danny Glover), the dapper accountant who seeks to marry into the family in The Royal Tenenbaums, was filmed nearby at the Brooklyn Society for Ethical Culture (53 Prospect Park West).

A few blocks away, you’ll find the the Montauk Club (25 8th Avenue), a private social club founded in 1889. Designed by famed New York architect Francis H. Kimball, the club house and its Venetian gothic architecture, carved mahogany woodwork, and stained glass windows can be sighted in a number of recent TV series, including Boardwalk Empire, The Knick, Gotham, and The Good Wife. In recent years, the upper floors of the club have been carved into condos. 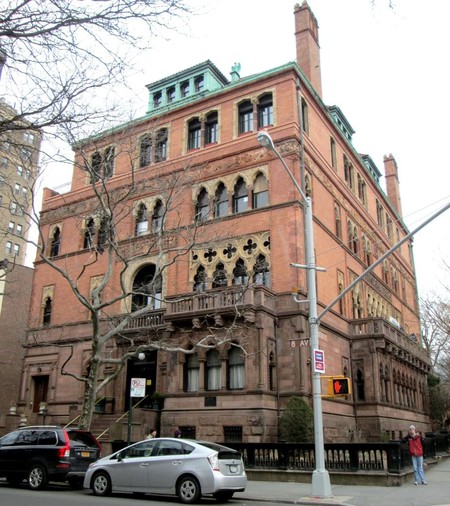 Across the street at 17 Montgomery Place, you’ll find the brownstone where Amanda Popper (Carla Gugino) lives in the 2011 family comedy Mr. Popper’s Penguins, starring Jim Carrey as a businessman who inherits a colony of penguins.

Head down Montgomery toward 8th Avenue. Peek ahead towards the stretch of 8th Avenue between Carroll and President and you can almost picture Daniel Day-Lewis on horseback in the snow as Newland Archer in Scorsese’s Edith Wharton adaptation The Age of Innocence (1993). The scene was shot on the block; Scorsese did further filming in Prospect Park. 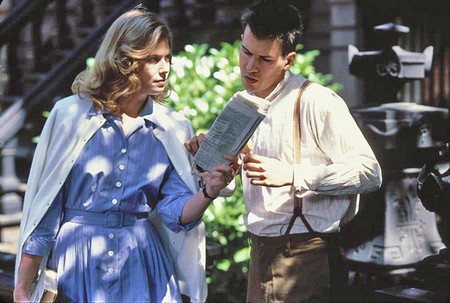 Turn left onto Carroll Street. The brownstone at number 787 is the home of the family (including parents played by Tom Cruise and Miranda Otto) that has a tearful reunion after surviving an alien invasion in Steven Spielberg’s War of the Worlds (2005).

Then walk down Carroll to 7th Avenue and turn left. The independent Community Bookstore at number 143 was the setting for a scene in Baby Mama, the 2008 romantic comedy starring Tina Fey and Amy Poehler.

From there, it’s a short stroll to Francis Xavier Rectory at 225 6th Avenue. The Roman Catholic church, which was founded in 1886, passes as a Russian church in the 2004 film John Wick, starring Keanu Reeves. It’s also where a young Colin Sullivan (Matt Damon) serves as an altar boy in Scorsese’s 2006 crime drama The Departed. 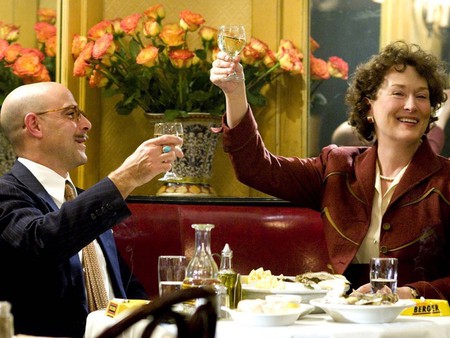 Continue walking down Carroll and you’ll find the location of the former Café Moutarde (239 5th Avenue), which stood in for the Parisian café where Julia Child (Meryl Streep) and her husband Paul Child (Stanley Tucci) dine in Julie & Julia (2009), based on the memoir by Julie Powell. The French bistro closed years ago and is set to re-open soon as a Korean BBQ place.

You can’t talk about Park Slope without mentioning real estate and the same is true for many films set there.

The exteriors of Enders’ building were filmed at 51 Prospect Place, near 6th Avenue, an area that back in 1970 was experiencing urban blight. 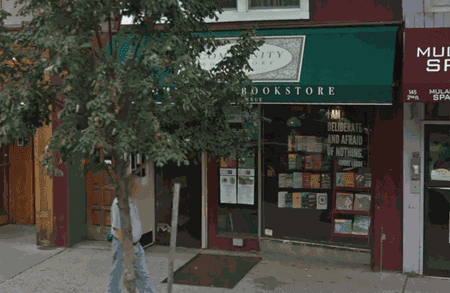 Gentrification also looms large In The Squid and the Whale (2005), Noah Baumbach’s semi-autobiographical comedy-drama about two boys, Walt (Jesse Eisenberg) and Frank (Owen Kline), trying to cope with the divorce of their self-involved literary parents Joan (Laura Linney) and Bernard (Jeff Daniels) in 1986.

When the parents split, Joan keeps the brownstone at 167 6th Avenue at Saint Johns Place while Bernard complains about having to move across Prospect Park (“Is that even Brooklyn?” asks Walt).

Bernard gripes about how expensive the neighborhood has gotten as he circles the block for the umpteenth time, growing increasingly agitated in his quest for an elusive parking spot. (The neighborhood is sometimes called “No Park Slope.”)

Current Park Slope residents can relate to his parking woes, but they might scoff at his complaints about real estate prices circa 1986. The family home in the film hit the market in 2017 with an asking price of $5 million. 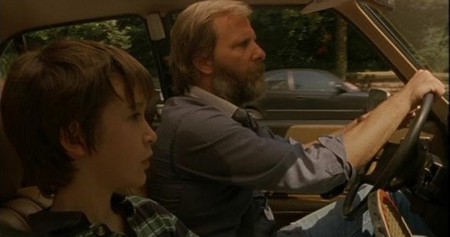 Parking hell: Owen Kline and Jeff Daniels in ‘The Squid and the Whale’ | © Samuel Goldwyn Films

Perhaps the neighborhood’s greatest jewel is the historic movie house at 188 Prospect Park West by Bartel Pritchard Square. The building originally housed the Sanders Theatre, which opened in 1928 and closed in 1978, after which it remained vacant for a decade. Since then, it’s changed hands several times.

It was most recently The Pavilion, which closed in 2016. Now undergoing a $10 million renovation, the theater is slated to reopen this year as a new branch of the independent Nitehawk Cinemas. No doubt the new theater, which will retain the original’s art deco details, will sometimes show films that were shot in the surrounding cinematic neighborhood.