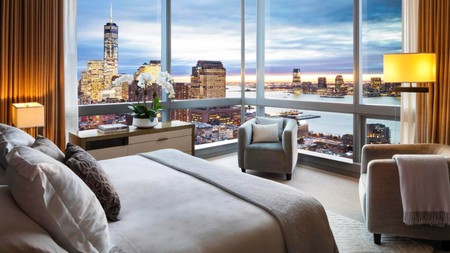 Enjoy sweeping views of Manhattan and the Hudson River from the luxurious rooms at the Dominick | Courtesy of The Dominick / Booking.com

This beloved New York City neighborhood gets better with age, and no trip to the Big Apple is complete without a visit. Better yet, make it your home base in one of these beautiful hotels in Greenwich Village, bookable on Culture Trip.

In Lower Manhattan, bordered by Broadway and the Hudson River, Greenwich Village is historically the most bohemian spot in New York City. It’s been the backbone of many creative movements, from the beat poets of the Sixties to the catalyst of LGBTQ rights at Stonewall – a Greenwich Village gay bar that was the site of the 1969 riots. With its diverse mix of musicians, artists, NYU students and chess players from all walks of life, Greenwich Village is always a unique adventure. Staying nearby also puts you in a good position to reach Chelsea, SoHo, East Village, West Village and the High Line – if you can drag yourself away from the performers in Washington Square Park, the neighborhood jazz clubs (including the legendary Blue Note) or the world-famous comedy clubs. 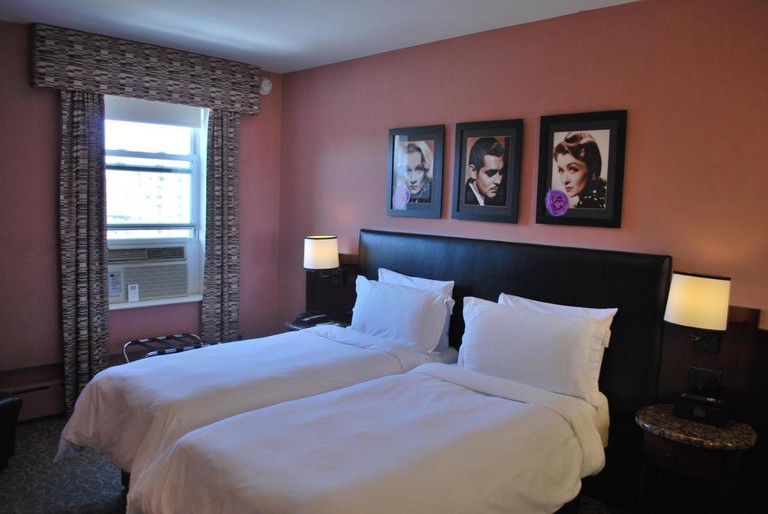 Courtesy of Washington Square Hotel / Booking.com
This historic, eight-story Greenwich Village hotel is about as close to the marble arch at Washington Square Park as it gets, and receives bonus points for having hosted music and literary giants such as Bo Diddley and Ernest Hemingway. Today, NYU parents and travelers are drawn by the original art deco architecture, and easy access to Lower Downtown. Simple rooms are on the small side and come with retro C.O. Bigelow bath products and bathrobes. The restaurant offers a weekend Sunday jazz brunch and a regular menu of sandwiches, salads and gazpacho whizzed together out of fresh tomatoes and herbs from the rooftop garden. 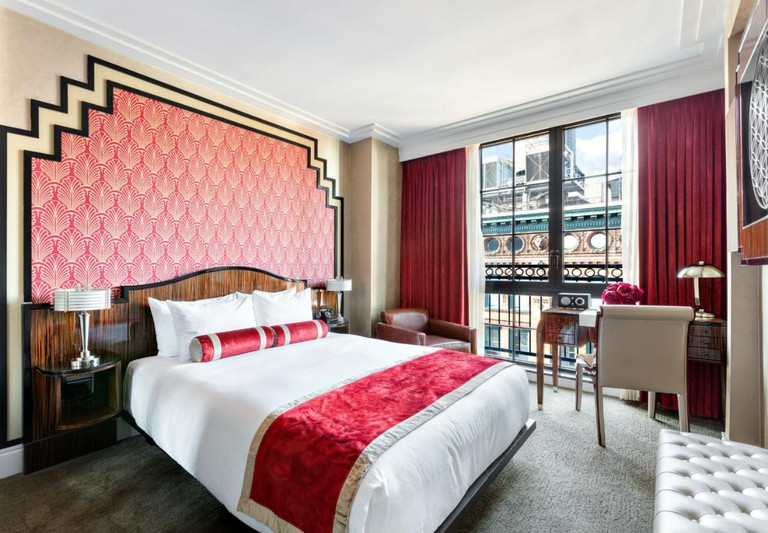 Courtesy of Walker Hotel Greenwich Village / Booking.com
Part Georgian, part art deco, this friendly boutique hotel in Greenwich Village is a hidden gem in the heart of the action. There are 113 rooms with rich design and bold colors – some with balconies (ask for a higher floor and prepare yourself for outstanding views). The lobby has homey areas for enjoying afternoon tea or cocktails and features live music on weekends. The restaurant, Society Cafe, serves market-to-table cuisine highlighting ingredients from the Union Square Greenmarket – try the wholewheat pizzas or skirt steak from premium beef producer, Creekstone Farms. Ask the front desk about guest discounts at nearby attractions. 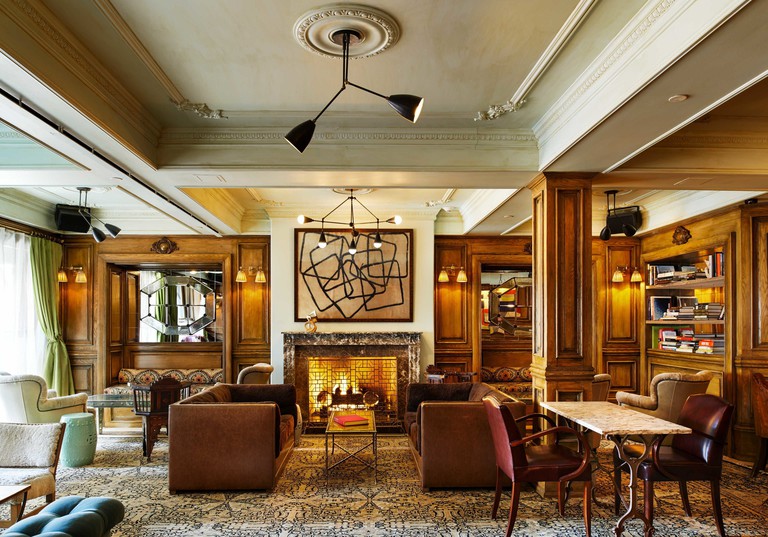 Courtesy of The Marlton Hotel / Expedia
The Marlton’s stately entrance on 8th Street exudes history – it was once a temporary home for Beat Generation creatives such as novelist Jack Kerouac (who wrote two works of fiction here) and students of the New School. The rooms at this Greenwich hotel are unabashedly small (revealed in the motto: small rooms, big ideas) but perfectly formed, with French-inspired flourishes such as crown moldings and herringbone floors. On the main floor there’s an espresso bar with a communal table for working, plus a popular cocktail bar and garden-like restaurant, Margaux, serving house-made pastas such as squid ink bucatini. The lobby is home to one of the city’s most beloved fireplaces, next to which you can sip a hot drink on a cold winter’s night (if you’re lucky enough to snag a seat). 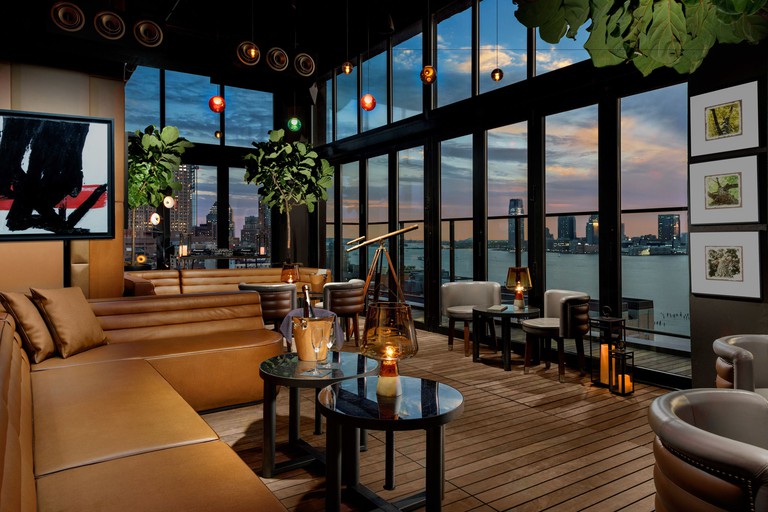 Courtesy of Hotel Hugo / Expedia
This sleek hotel near Greenwich Village is technically in SoHo, just a short walk from the action. Rooms are nicely decorated with mid-century modern furniture and maritime touches – some have spacious work desks with views of the Hudson River. No matter where you sleep, you’ll get plenty of river views on the 20th floor, as the large rooftop has two distinct areas: an enclosed cocktail lounge called Bar Hugo with regular music and craft cocktails, and a Havana-style cantina with views of Lower Manhattan, where you’ll get mojitos and street tacos. If that’s not enough, the ground level has a farm-to-table restaurant, perfect for a hearty breakfast. 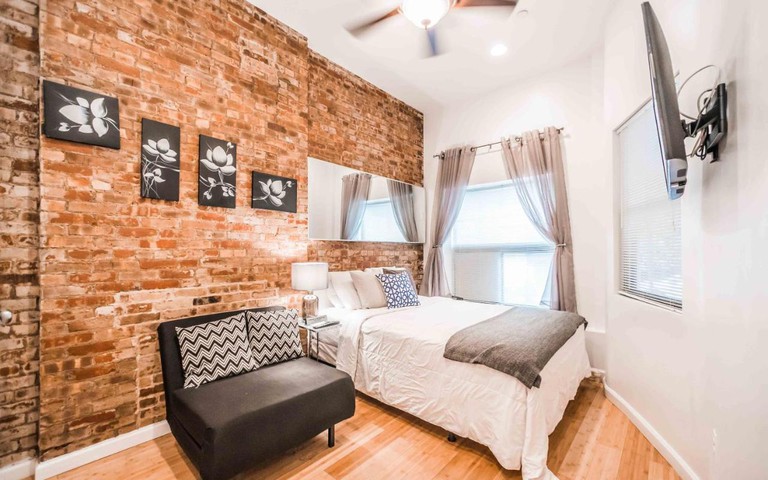 Courtesy of Chelsea Inn Hotel / Booking.com
Not to be confused with the much bigger Chelsea Hotel, this little neighborhood place is tucked away on 17th Street. From there it’s a short walk to Greenwich Village and the elevated High Line, as well as hundreds of art galleries, vintage shops, restaurants and boutiques. Compact rooms have simple decor – some with exposed brick walls – and come in four sizes, starting with adjoining rooms that share a bathroom (great for families). All others have ensuite bathrooms, and there’s even a bunk option. 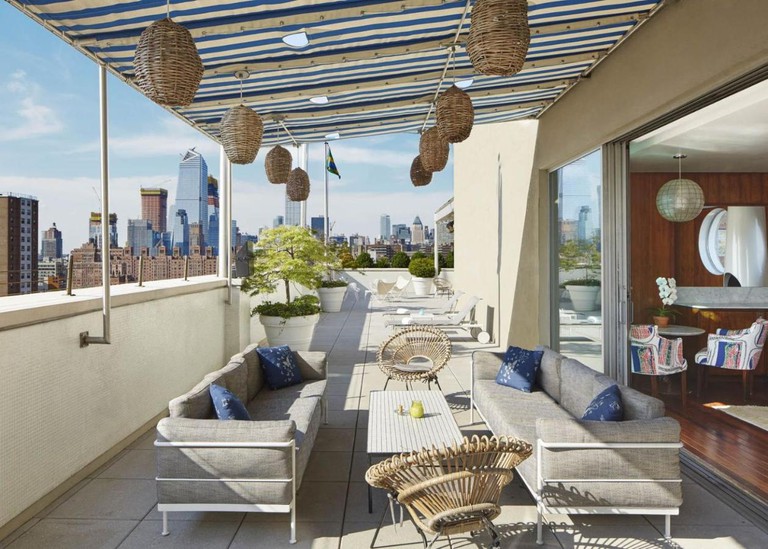 Courtesy of The Maritime Hotel / Booking.com
This hotel across from the Chelsea Market is hard to miss, with its porthole windows emulating a luxury ocean liner. In the 1960s, the property functioned as the headquarters of the National Maritime Union, hence the motif. Not surprisingly, the maritime decor pervades, with dark-wood furnishings and navy blue and white accents. Rooms come with luxury amenities and, of course, annular windows. You can browse through shelves of books in the handsome lobby before dinner at the neighboring steakhouse; or, head downstairs to TAO Downtown – where you’ll be greeted by the Quan Yin Buddha and a 300-seat dining room serving Asian comfort foods including barbecue duck fried rice and chicken wing lollipops. 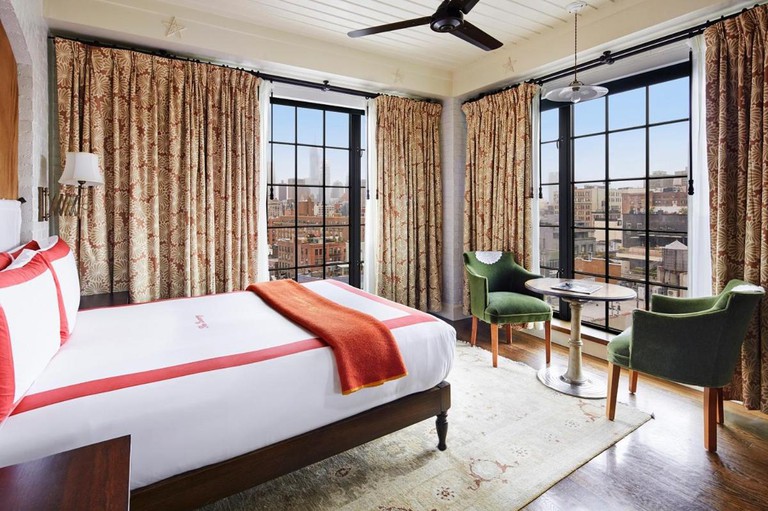 Courtesy of The Bowery Hotel / Booking.com
This swanky hotel in the Lower East Side has timeless, nostalgic appeal thanks to its richly decorated lobby, made even more homely with a roaring fireplace. The fabulous, loft-like rooms have marble bathrooms and complimentary copies of The New York Times. Have drinks at the lobby bar, or stay for dinner at the popular restaurant – Gemma – which serves rustic Italian cuisine such as ​​chitarra cacio e pepe (pasta with cheese and pepper – a recipe that dates to Ancient Roman times) in an ambient setting that looks straight out of Tuscany. Grab a bicycle and check out the neighborhood, including the cemetery next door. There are rumors the hotel could be haunted, but that doesn’t seem to bother the regular celebrity guests. 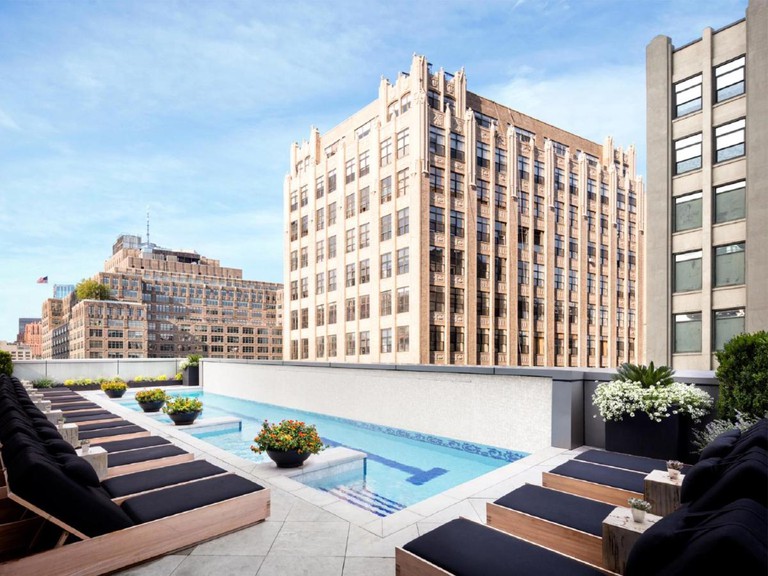 Courtesy of The Dominick / Booking.com
For uptown luxury in a downtown location, there’s the former Trump SoHo, which switched hands in 2017 to become the Dominick. The modern tower offers plush hotel rooms and suites featuring floor-to-ceiling windows that let in incredible views of the Manhattan skyline. Other perks include spacious bathrooms with Italian marble, Nespresso machines and leather-topped desks. The grandiose lobby is sure to impress, while common spaces are great places to work. The Vestry restaurant is run by top chef, Shaun Hergatt, who highlights local producers. During the summer months, El Ta’koy serves Hawaiian-style street food on the seventh floor, which also has a seasonal outdoor pool and cabanas. Just above, on the eighth floor, is a fitness center with Peloton bikes and personal trainers for hire. 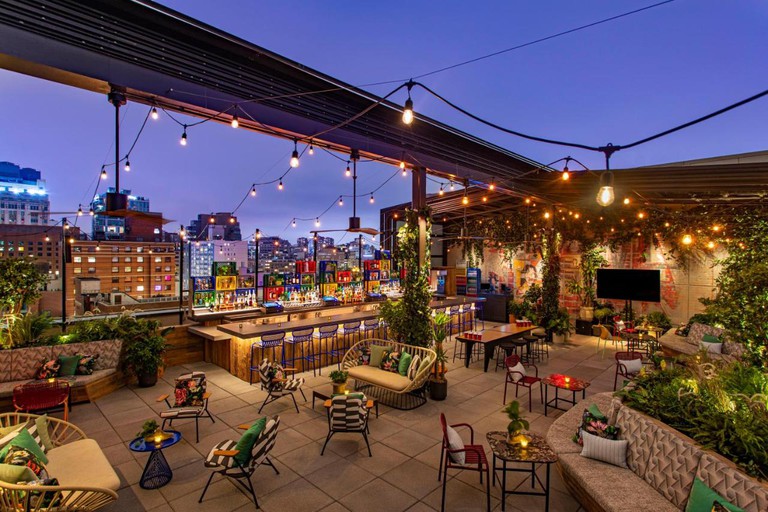 Courtesy of Moxy NYC East Village / Booking.com
This East Village hotel is a relatively new addition on the scene, designed by the Rockwell Group. There are 286 tech-savvy rooms with industrial-style touches, large windows and rain showers, while common areas offer co-working spaces, cultural programming, and four bars and restaurants overseen by the hospitality maestros at Tao Group. The standout is Cathédrale, a French-Mediterranean restaurant overshadowed by an enormous, wire-mesh ceiling sculpture by Edoardo Tresoldi. Unique menu items include the potato chip omelet with caviar and crème fraîche. There’s also a lobby cafe, an underground lounge and a rooftop – plus a fitness center with weekly classes. 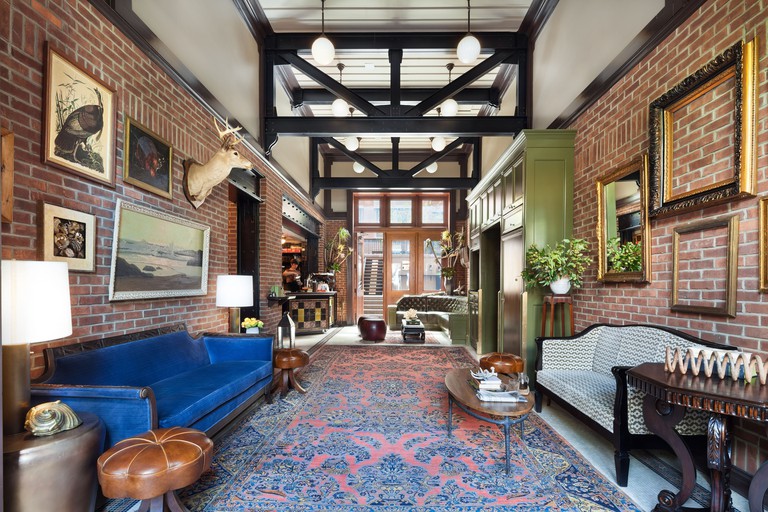 Courtesy of The High Line Hotel / Expedia
This upscale 60-room boutique hotel near Greenwich sits in a collection of gothic-collegiate brick buildings that date to the 1800s, including the Refectory – a popular place for stylish events (ask for a tour). But it’s hardly old school, given the paperless checking in facility on iPads in the lobby. Rooms have hardwood floors and antique furnishings, while common spaces offer high-grade Intelligentsia coffee (inside) and champagne and cheese and charcuterie (outside). There are also quieter areas to bask in some solitude – not to be taken for granted in NYC – such as the interior cloistered gardens. When you’re suitably refreshed, grab one of the Shinola bicycles and hit the town, or head to nearby Chelsea Piers Fitness with your free guest pass.

Looking for other places to stay near Greenwich Village? Book into one of the best hotels near Manhattan Bridge, or treat yourself to a luxury Manhattan hotel, bookable on Culture Trip. Inspire your NYC itinerary with the top things to do in Chelsea, or the must-visit attractions in Midtown. Don’t miss the best brunch spots near Times Square.