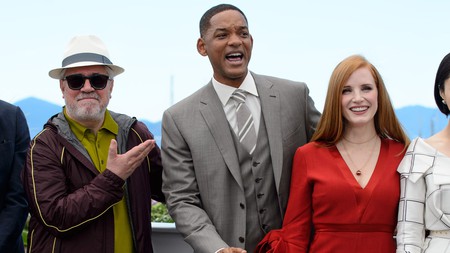 The Cannes Film Festival started today with a veiled debate about nothing less than the future of cinema. At the opening press conference, jurors Pedro Almodóvar and Will Smith took opposite positions on how the streaming revolution is altering consumers’ viewing habits.

The Spanish director vehemently defended traditional movie-going. The Hollywood star put up a spirited defence of Netflix, which bypasses theatrical exhibition by streaming its drama series and other programs directly to viewers’ homes.

The dispute between Almodóvar and Smith (pictured top, with fellow juror Jessica Chastain) occurred because the festival appears to have regretted admitting two Netflix productions, Joon-ho’s Okja and Noah Baumbach‘s The Meyerowitz Stories, to this year’s main competition.

Incensed because neither of these films will be released theatrically in France, local theater owners have protested their inclusion in the festival’s 70th edition. To mollify them, the festival last week announced that all future competing films would require distribution in French theaters. 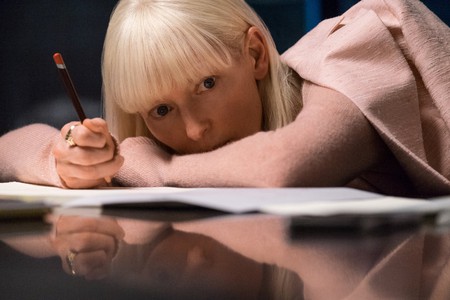 This would slow Netflix’s revenue stream in France, because a film cannot be streamed there until three years have elapsed after its theatrical release. Variety has reported that France’s National Film Board rejected Netflix’s plan to arranged limited theatrical release schedules for Okra and The Meyerowitz Stories before streaming them on a set date.

Almodóvar, this year’s Cannes Jury President, read a passionate statement in favor of theatrical screenings for all Cannes films:

“What I prefer is these films not only to be seen in 190 countries but always to be seen in a big screen. That is really what I am concerned about,” he said. “Digital platforms are a new way to offer work, which in itself is good and enriching, but these new forms should not try to remove existing forms, like movies.

“They should not alter the habits of viewers and I think that’s the debate now. For me, the only solution is that the new platforms should respect and obey the existing rules that are already adopted and accepted by the existing networks, in the vision of them. And I think this is the only way to make them survive.” 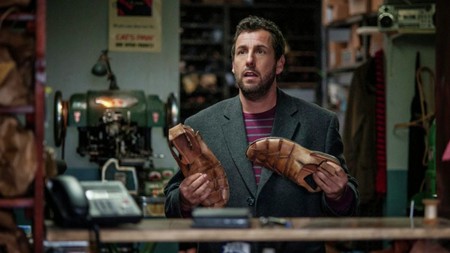 Almodóvar added that he could not see the Palme d’Or, Cannes’ top prize, or any other festival prize, “being given to a film and then not being able to see this film on a large screen. But this does not mean that I am not open and I do not respect and celebrate the new technologies and the possibilities that they offer us. I do acknowledge them, but as long as I am alive, I will be fighting for one thing that I’m afraid the new generation is not aware of: the capacity for hypnosis of the large screen for a viewer.

“I think what what really determines the first viewing of a film for every spectator is the size of the screen on which you see it. The size should not be smaller than the chair on which you’re sitting and it should not be part of your everyday setting. You must feel small and humble in front of the image that is here to capture you.”

Having recently completed filming on Netflix’s Bright, a $90 million futuristic fantasy, Smith was unlikely to agree wholeheartedly with Almodóvar. The pair share the same birthday, September 25, but the 48-year-old Smith, a onetime television star, is 19 years younger than Almodóvar and the father of three millennials. Understandably, he appreciates multi-platforming more than a dyed-in-the-wool cinéaste like the Madrid auteur.

“I have a 16-year-old and an 18-year-old and a 24-year-old at home, and they go to the movies twice a week and they watch Netflix,” Smith said at the press conference. “There’s very little cross between going to the cinema and watching what they watch on Netflix. In my home…Netflix has absolutely no affect on what they go to a movie theater to watch.

“They go to a movie theater to be humbled in front of certain images, and there’s other films that they prefer to watch at home,” Smith added. “It’s not as if they would’ve gone to the cinema if it wasn’t on Netflix. It’s two completely different forms of entertainment. In my house, Netflix has been nothing but an absolute benefit, because they get to watch films that they never even would’ve seen.

“Netflix brings a great connectivity for them to the world. They get to see movies that aren’t on a screen within 8,000 miles of them,” Smith continued. “And now they get to find those artists and they look them up online and they make contact. There’s this whole underground world of artists that gets born from that kind of connectivity. It’s done nothing but broaden my children’s cinematic, global comprehension.”

The Netflix controversy shouldn’t be taken as a sign that Cannes is wilfully resistant to television drama as an art form or unaware of the appeal of long-form storytelling to major filmmakers.

Two big names who have directed Palme d’Or-winners are being given festival showcases this year for the latest editions of their high-profile TV series: David Lynch with Twin Peaks (made for Showtime) and Jane Campion with Top of the Lake (which will air on the SundanceTV channel and Hulu after premiering on BBC Two in the UK).

“We’re open, curious,” Cannes’ artistic director Thierry Fremaux told Variety. “I’m not a big fan of series myself, and I don’t quite understand all the hype about the Twin Peaks series, but we at Cannes prize fidelity and generosity towards auteurs whom we value and have forged a long relationship with. Cinema remains a singular art, and we want to emphasize this, while keeping our eyes open on the world that surrounds it.”