Why Social Media is Telling You to #DeleteUber 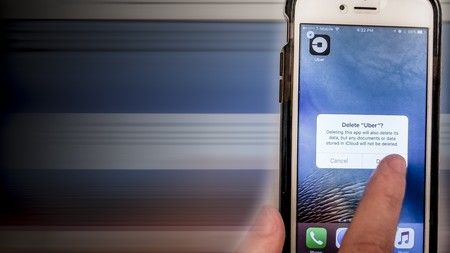 #DeleteUber was trending all weekend in the U.S., following the company’s response to protests against Donald Trump’s travel ban.

Uber, the ride hailing app used all over the world, is no stranger to controversies. However, the company’s latest PR disaster has led to a campaign on social media encouraging users to delete the app and deactivate their accounts.

On Saturday, the New York Taxi Workers Alliance encouraged its members to stay away from JFK airport for an hour, to protest Trump’s travel ban on people from certain Muslim countries. Uber has been criticized as drivers continued to pick up passengers from the airport, and after the protest was over, removed surge pricing from the area.

Many people on Twitter have been posting screenshots of them deleting Uber from their phones, along with their reasons why.

I’ve used .@uber for years. No more. Their CEO is colluding with Trump and has chosen not to decry the ban.

Uber’s CEO Travis Kalanick has already been under fire for agreeing to be a member of Trump’s Strategic and Policy Forum. Kalanick did call the travel ban “unjust” in a Facebook post, and offered support to Uber drivers who were affected by the policy. “At Uber we’ve always believed in standing up for what’s right. Today we need your help supporting drivers who may be impacted by the President’s unjust immigration ban,” Kalanick wrote in a separate blog post. Uber’s rival Lyft announced it would be donating $1 million to the American Civil Liberties Union, the organization which secured a temporary halt against the travel ban order. “Banning people of a particular faith or creed, race or identity, sexuality or ethnicity, from entering the U.S. is antithetical to both Lyft’s and our nation’s core values,” Lyft’s company co-founders wrote in a letter to users.

The technology industry, which has been slow to denounce Trump at times, has spoken out en masse against Trump’s draconian measures. Netflix CEO Reed Hastings said the ban was “so un-American it pains us all.” AirBnB co-founder Brian Chesky offered free housing to those stuck outside the U.S. and unable to get home, while Apple chief executive Tim Cook told his employees the ban was “not a policy we support.”

Reports suggest Trump’s next immigration policy will take aim at the work-visa programs technology companies use to hire tens of thousands of workers. If he does go after those programs, expect Silicon Valley’s response to be even more fierce.